Sure you heard about how Meghan Markle tried to trademark the word "archetypes" not so long ago. Of course that was completely daft and it got heaps of media coverage. That was the whole point.

I actually think this silly episode was used as another way to get the message out to the global elite about the shift in the trade of the pink drug that dare not speak its name. Ms Markle's mother is African-American, remember. So Meghan is dark-skinned.

Here's a tweet about the actual podcast itself. It was the usual cultural Marxist crap, of course. Note the pink flowers on her red dress. You see that a lot. 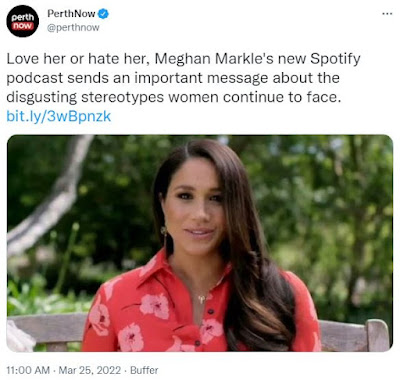 The podcast is called Archetypes and her kid's name is Archie. He's still a little tacker.

She wanted to trademark that name. And her surname is Markle. What are the odds?

As a result there were countless reports in the MSM featuring "trade, mark, Archie, type". So, when it came to that drug I mentioned the message was something like: "The type that you should be trading (consuming) is marked by having dark skin."

I know it's completely barking batshit mad. But that's how they get away with it. It's so crazy you'd never suspect that's what they were up to.

And if you've got a more plausible explanation for the clear wordplay described above I'd certainly love to hear it. Saying it was just another coincidence doesn't cut it, but.

And the rabbit hole doesn't stop there. Around the same time there were stories about how she was so "heartbroken" -- a term that is frequently used now, and which does evoke blood -- about the death of a dear friend called Oli Juste. (Note the black background on the screenshot.) 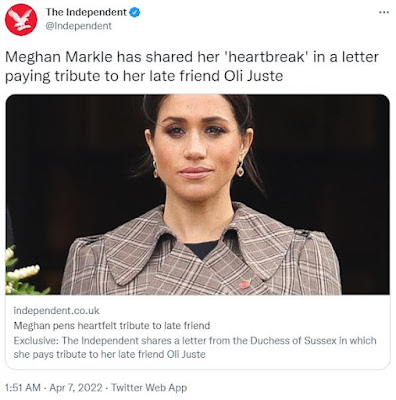 The weird thing was that he actually died several months beforehand. So why did she only publicly grieve the loss around the same time that all the trademarking nonsense was in the news?

I reckon it was to do with his name, Oli. That's an anagram of oil. It, like red wine and flowers, can be used as a symbol of this drug.

Curious about the dude, I checked out his Insta, which is still up. Note the classic one eye imagery.

I thought this was interdasting also. Where have we seen that blue and white combo before?

Here's something else that I think might be part of this campaign being run by the occult elite: Spunky Brit actress Thandiwe Newton (who is dark skinned) was fired from the production of a sequel to Magic Mike. Apparently the stoush started over the infamous "slapgate" which I believe was also a big part of this pattern.

Seems she was really stressed out at the time due to the breakdown of her marriage of 24 years. 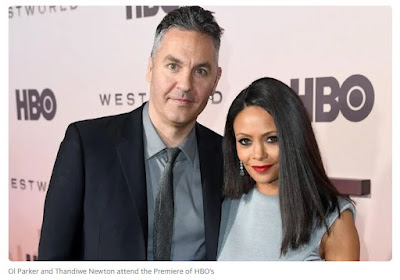 BTW, I'm not saying that the marriage breakdown and film set fight were fake and Ms Newton is "in on" some vast conspiracy. I'm saying that the issue was given prominence by the MSM because it fit the symbolic message they wanted to convey at the time.

Then there's the local story about footy player Ollie Wines and his heart issues, possibly resulting from the you know what. 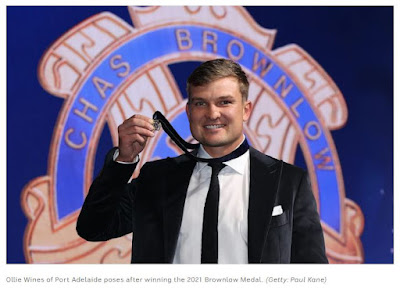 Search online for his name and what's one of the first things that comes up? The fact that he won a Brownlow Medal in recent years.

Actually, I think that was a coincidence. Still, it certainly adds to the weirdness ...

If you appreciate these posts please consider supporting me via Ko-fi. Aussies, know your rights!

Posted by MattHaydenAU at 2:13 PM