"Just stop oil" might not mean what we think it does

Recently, I've blogged and vlogged about how the Cabal has to get the message out about bad batches of an unspeakable drug. To this end they are constantly using symbolism in the MSM, which they own and control.

Remember also that they are behind many of the big activist NGOs. And they secretly fund most if not all the batshit warmist groups like Extinction Rebellion. They use these to keep the normie fear going and to cause division and enmity. Like their pets the mind-controlled slebs, they can also be used for specific comms.

I think that's likely the case with a group called Just Stop Oil. You may have heard about them because of this useful idiot of theirs stopping a soccer match in the UK. 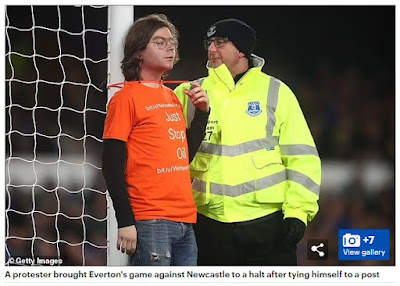 I couldn't help noticing that Newcastle was one of the teams in the game. Remember how there was that fire next to the Carlisle Castle Hotel in Newtown ... I'm thinking, what are the odds?

Yeah, I know most would see that as just another coincidence. But there are just so many of these in MSM reports about climate change, the jab and other issues and events lately. This cannot be by chance.

It's pretty clear that globalist narratives (eg about global warming) are put into the MSM through a centralized, top down process. As a result they're the same across the world. So why wouldn't they use a similar process for their symbolic incantations and creepy comms? 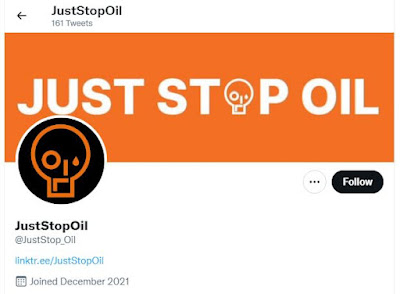 Above is Just Stop Oil's Twitter profile. Note that they've only been going since late least year. As well as the orange theme the design uses the classic illuminati one eye symbolism. The smaller eye is like a teardrop, or maybe one of another body fluid (hint: it's red).

They're part of a possible Skull and Bones reference that also looks kinda like a light-globe, evoking illumination in the blackness.

That shape is also reminiscent of a keyhole, implying a select audience. And look at the "U" right above the skull. That's the ol' Y-head again, I reckon. It's white, as in rabbit.

See how the mouth (formed from the "L") suggests something dripping from the lips. Is that the "oil" they're secretly referring to?

So why would the occult elite need to start another activist group at this time? Well, I suspect that as well as flogging the usual warmist bollocks and annoying the crap out of as many people as possible, it's being used to get a message out to their creepy mates about possible dangers related to the trade in "the drug that dare not speak its name".

But instead of telling people to spit it out or not drink it like Will Smith clearly was with that obviously fake slap at the Oscars they're warning them that operatives are no longer untouchable and some are even being arrested, convicted and jailed. That's what the orange is about, I reckon. 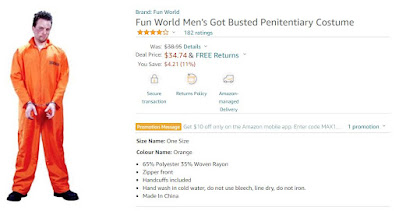 IMO it's used to evoke those uniforms worn by prisoners in Gitmo and other correctional institutions. The oil is a euphemism for the horrifically harvested fave psychadelic of elites across the world.

Note the headline on the top left of this page of a recent issue of the Failing Terrorgraph. It's right next to a photo featuring kids in pink (what's Will Smith's wife's middle name again?) and the word horsepower, evoking cars and therefore traffic.

Please check out the video I made about this symbolic matrix. You'll see what I'm getting at.

They've used this imagery repeatedly. This video describes another example of it, this time featuring the band Midnight Oil. 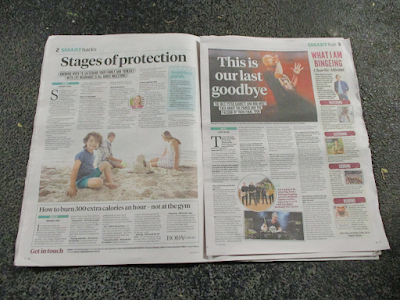 The relevant stuff is near the end, but please watch it all the way through if you can to get the whole concept. The amount of time and effort these people put into building these symbolic matrices is just insane. That's not surprising, given they're part of a completely and utterly batshit and evil death cult.

Finally, back to the mind-controlled moron who held up that soccer match in England. Look at the photo at the top of this post. Note how he's zip-tied himself. This evokes throat cutting (blood spillage) but also hanging. And that's what they're really packing their dacks about, as described in the video below.

Can you see why, for the time being at least, they really wanna "stop the oil"?

If you appreciate these videos, please consider supporting me via Ko-fi. Aussies, know your rights!

Posted by MattHaydenAU at 4:39 PM