Do the anti-vape ads in Sydney have a hidden agenda?

I've posted before about how there's a massive hidden trade in a drug that dare not speak its name. It seems that it is slowly going belly up. Hard to know exactly what's happening but I think one of the reasons is that there are a lot of bad batches out there.

As mentioned, pinky-purple often features in symbolism related to this drug, since that's the colour of it. I've seen heaps of weird stories in the MSM that feature that colour and look like warnings to a select audience.

Crazy as it sounds, a campaign of anti-vape ads in NSW appears to be another one. Australian state governments are clearly controlled by the Cabal, so why wouldn't they be used in this way?

The ads alert kids who vape that there are all kinds of toxic chemicals in what they inhale. That's hugely ironic given that they turn a blind eye to the dangerous components in the you know what.

On the contrary, they continue with their insane push to make everyone take it, including kids. (Actually, they seem even more determined to stick syringes into them than those in other age groups.) 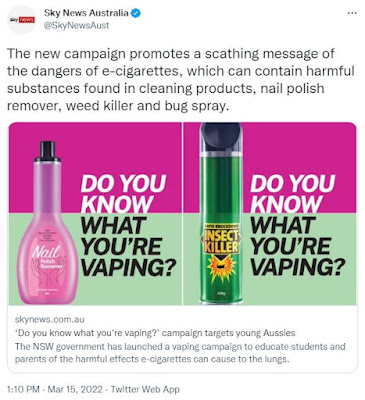 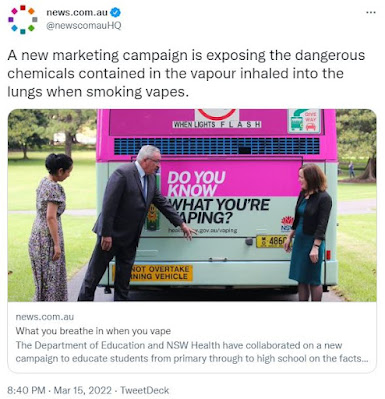 It's obvious that the government isn't remotely interested in the wellbeing of children, or any citizens for that matter. That's why I think it's comms.

It associates the idea of kids with consumption of a drug and associated risks. As you can see, the pinky-purple features heavily in it. And vaping is another way of inhaling fire, innit?

The MSM have been promoting the idea of vaping dangers for a while. Look at this feature in a recent issue of the Failing Terrograph. Note the classic one eye symbolism and the pinky-purple elements in the picture. The word vaping is highlighted with that same colour. 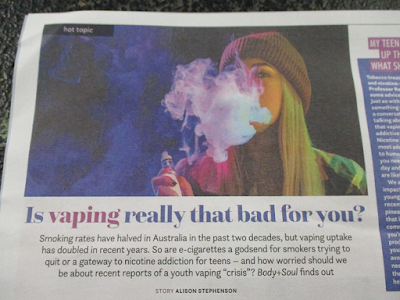 So, I think this is actually what's happening. They can't tell their creepy mates to lay off  "the good oil" by e-mail, text or other forms of online communication because that would incriminate them. So they have to do it in a coded way.

Remember that this drug is part of an absolutely massive control system that's been in place for a very long time. So many influential people across the world are controlled by it -- albeit indirectly -- it's amazing. And it's in serious upheaval.

There are several other patterns in the MSM that I think fulfill the same function. I'll blog about them if and when I find time.

There's some more about this anti-vaping narrative in the video below. It ties in with symbolism related to Ash Barty of all things. Please watch all the way to the end to see just how crazy these people really are.

Remember, these are not just a bunch of demented cultists on some commune out in the boondocks. These are "the great and the good"; those in the upper echelons of media, politics, the judiciary, etc. When you really understand just how deranged and evil they are so much of the madness currently plaguing the world makes a lot more sense.

Posted by MattHaydenAU at 2:08 PM