One of the PC Left's main gripes about Australia is how terribly raaacist we are. But this accusation is obviously bollocks. Walk down any crowded street in Sydney, for example, and you'll see people of a whole range of ethnicities. It's a truly global city without a doubt.

Then there are the various cultural festivals held throughout the year. Right now, for example, it's Chinese New Year. There are many events on in Sydney in celebration of it.

Its presence is pervasive. Take Circular Quay. Currently there are numerous giant inflatables placed in various locations within it. They give the place a colourful and, dare I say it, exotic quality that the crowds clearly appreciate.

Obviously each of these figures has a unique back story. But what I like about the whole display is that you can create your own narratives out of it if you wish.

There's a giant dragon in front of the Museum of Contemporary Art, for example. It appears to have a humanoid figure (reminiscent of a Teletubby!) holding a golden orb sitting on its tongue. I'm not sure what this symbolizes but it's certainly intriguing. 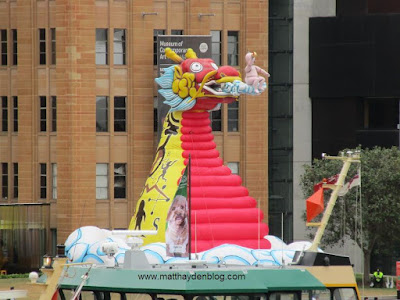 Resting regally right next to the train station platform is a huge tiger. He seems to be peering towards the small park near The Rocks. 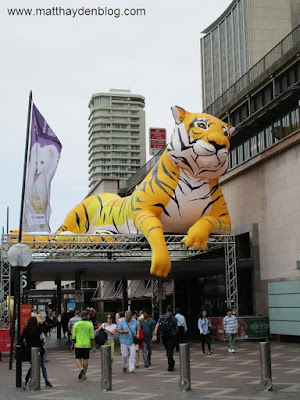 In that particular location are a team of brightly coloured rabbits doing Tai Chi! 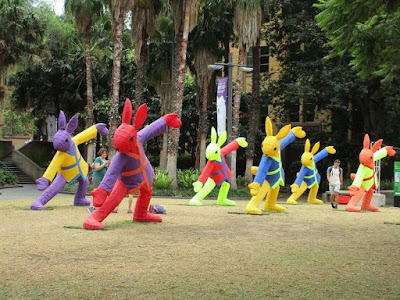 These guys are really "in the zone". Check out their expressions of intense focus: 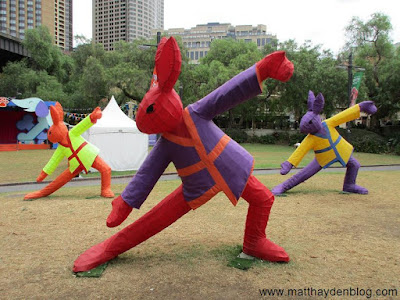 Perhaps such self-possession is required given the potential threat presented by the big cat nearby? 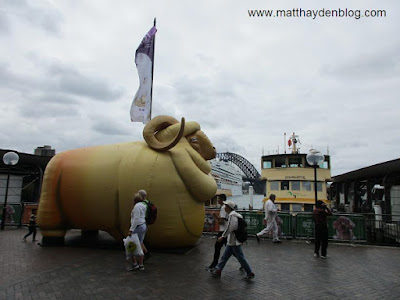 Speaking of which, there's a large ram right near the water below and behind the tiger. Understandably, he looks a bit nervous. 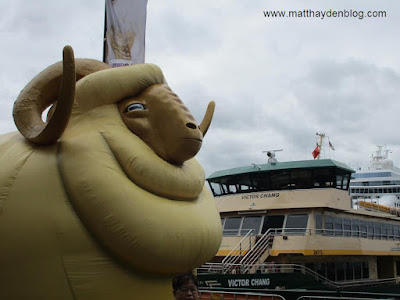 When I got this shot, the ferry named in honour of Victor Chang was docked nearby. Kind of spooky given the context, and maybe a case of "sino-synchronicity".

Looking down towards The Sydney Opera House, at the base of "The Toaster" apartments, are three wise monkeys. 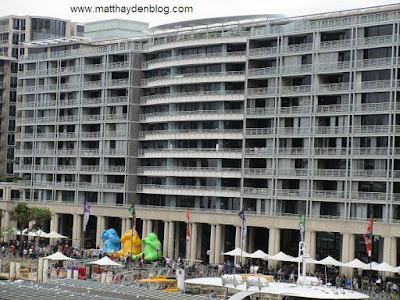 Not quite sure what they are so desperate to avoid knowledge of ... Perhaps, like Paul Keating, they are just simply appalled by the "architectural monstrosity" behind them? 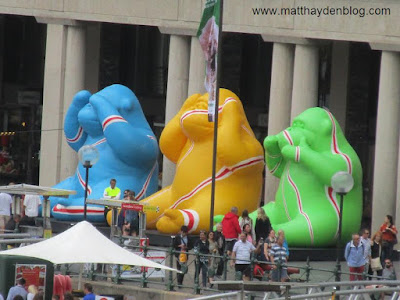 There are several other charming installations placed throughout this iconic location. Definitely worth a visit while the festival is on.

You've probably heard that line: "Politics is showbiz for ugly people." It's so true, and in several ways. Hypocrisy, for example, is rife in both Canberra and Hollywood. And it relates to many of the same issues.

Then there's the common obsession with sex. Makes perfect sense. Power is the ultimate aphrodisiac, after all. (That quote is attributed to Henry Kissinger. And he would know ... If you looked like him, you'd prolly need some kinda "drug" at your disposal to make hot women wanna shag you, right?)

And with sex comes gossip. Seems like Canberra "insiders" spend as much time talking about who's humping whom as they do about more edifying subjects such as economic and cultural policy!

Sam Dastyari's tweet about Barnaby Joyce and Vicki Campion was a perfect illustration of this obsession. And it was eerily similar to screenwriter Scott Rosenberg's Facebook post about Harvey Weinstein. 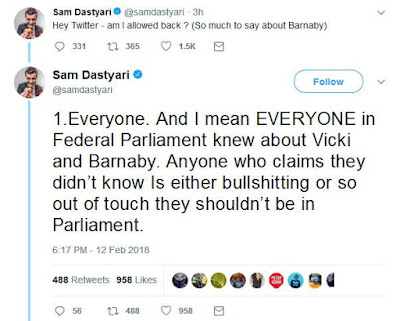 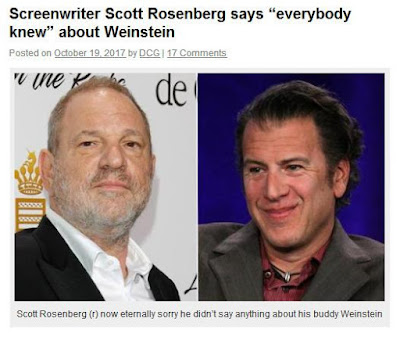 Obviously there was a big difference between the two cases in that what Weinstein was up to turned out to be utterly heinous. (Rosenberg was referring to his well known general skeeviness, BTW. Sounds like he didn't know of any actual rapes until the gruesome details hit the headlines.) The goss about Barnaby, OTOH, was that he was schtupping a staffer and had gotten her preggers. While obviously this was a consensual arrangement it was still considered scandalous by most people who knew of it.

That said, the #MeToo angle has been conflated with the Joyce narrative, with allegations that he drunkenly pinched a woman's bottom a while back. (I'm always skeptical about historical claims like this. You think, why are they being aired now? If telling journos is justified presently, why wasn't this done back when the acts were supposed to have occurred. They tend to make the accusers look more like opportunists out to cause maximum reputational damage than genuine victims seeking justice.)

In any case the thing I find fascinating about both these scandals is that so many people in a professional and social scene can yabber away endlessly among themselves about very private details of a public person's life while managing to keep them completely hidden from the wider world. And many of these people are journalists, remember.

Sure, now the whole world knows what a monster Weinstein is, and all of Oz is aware of Joyce's dirty linen. It's as if insider tales like this need to reach a critical mass before they explode into the public arena.

And what factors go into that process? God only knows ... But they do seem pretty arbitrary, and relate to who has the most power and influence at any given moment. In the case of Weinstein it looks very much like Hillary's loss to Trump was a major factor.

The liberal establishment he'd been so suppotive of for so long had been dealt a yuuuge blow. Thereby substantially weakened, it could not offer him the protection from exposure it did in the past. MSM journos, previously terrified of losing their jobs -- or worse -- for crossing the seriously connected Tinseltown "Mr Big" became emboldened enough to finally report on his vile behaviour.

And why did the Joyce saga only surface in the meeja recently? Can't be that journos were ambivalent about it. Seems that most, if not all members of the Canberra press gallery long thought it was newsworthy.

Some on the Left have said that there was an eeevil right-wing cone of silence put in place to make sure Joyce won back his seat after his citizenship woes. But then why didn't Fairfax or the ABC report on it? The Daily Tele was the first major outlet to break the story, as far as I know. And from what I've read they sat on it because they didn't have enough hard evidence to justify publication.

Well, whatever forces were actually at play in this case, there are no doubt many more scandalous Australian political tales that only those in the know are gossiping up a storm about -- just like in Hollywood. One or more of them will eventually become public knowledge.

Why some are chosen and some are overlooked seems to me to be at least as intriguing as the tales themselves.

UPDATE: Another example of mainstream media and political establishment keeping a scandalous secret, this time from the United Kingdom: 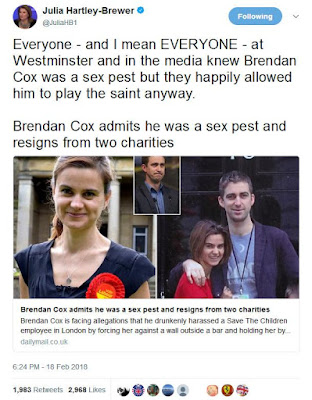 Posted by MattHaydenAU at 1:59 PM No comments:

Barnaby's been hypocritical. But the SSM angle on his staffer scandal is too long a bow, IMO

The more details that emerge about this scandal involving Barnaby Joyce and his pregnant staffer, the more unedifying it becomes. No use beating around the bush here, he's made a complete hash of things.

Sure, pollies do have a right to privacy but not if their personal shenanigans impact their taxpayer funded work in such an obvious way ... And I do think that since he's been on the record as espousing "family values" he is certainly guilty of big time hypocrisy.

That said, the vicious glee with which lefties have been tweeting about this is really disgusting. He's certainly not the first pollie to have strayed from the marital bed. And plenty of those guys were on the Left, remember.

Take Bob Hawke, who fell in love with Blanche D'Alpuget, the writer of this book about him. There was also that unedifying episode involving Tony Burke, along with countless others across the spectrum here and overseas.

You can be damn sure that most of those members of the Twitter trollective getting stuck into Joyce would be much less critical -- even defensive -- of their male fellow travellers embroiled in similar circumstances. And some of these hypocrites are even sledging the young, powerless female staffer involved! How very feminist of them. 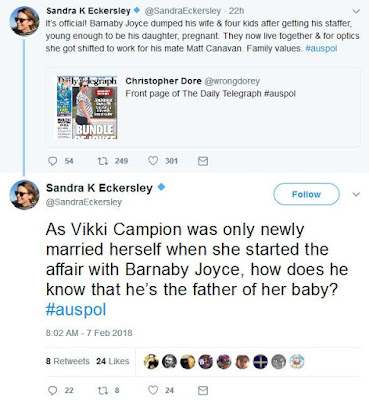 Interestingly, many of these trolls have been relating the scandal to Joyce's stance on same sex marriage. Now, we know he was against it. But he actually abstained from the plebiscite vote -- probably because of these events unfolding in his private life. Yet opportunists are still using this issue to bash him over that one. Bizarre. 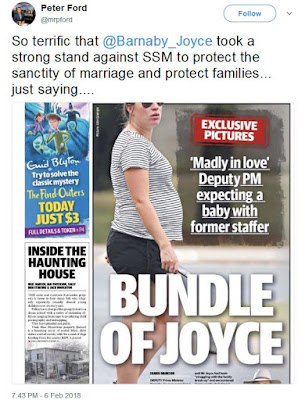 If it had turned out he'd been having an affair with a bloke, sure, it would have been far more relevant ... But tweets like the one above strike me as being opportunistic and mean-spirited. They certainly aren't a positive endorsement of "marriage equality", either.

They are very negative in essence, implicitly equating SSM with the erosion of family values. The subtext is basically, "Dude! You trashed the institution of marriage with your infidelity. So why can't gay people also trash it by becoming legally married?"

Here are some more tweets in this vein: 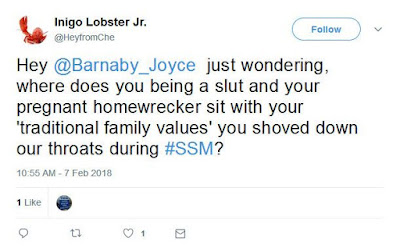 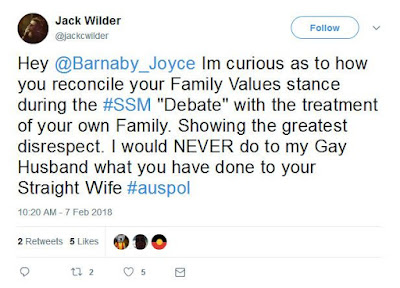 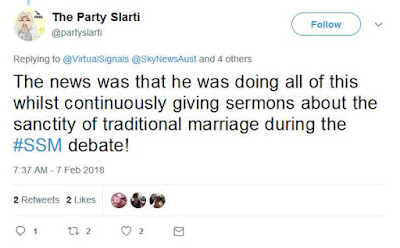 This one is probably milder than most. But it's silly and sanctimonious as all get out: 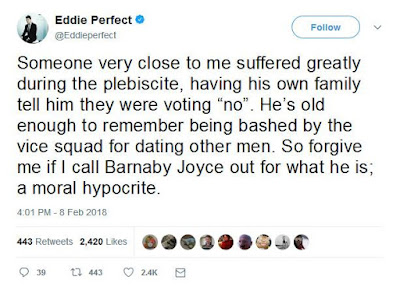 FFS. If you "suffer greatly" because your family disagreed with you about politics (basically exercising their democratic right to defend an institution common to pretty much every culture on Earth and one that that has endured for thousands of years unchanged) then you really need psychological help. Sorry ... And of course it was wrong that his guy was bashed by homophobic plods decades ago. But how is this Joyce's fault?

Given so many lefties have linked the issue of SSM to this disastrous destruction of a family by their conservative hate figure, I think I'm justified in pointing out that those in the "rainbow" range of progressivism have also behaved in the most selfish and destructive ways relationship-wise. Take Kathleen Wynne, Premier of Ontario. 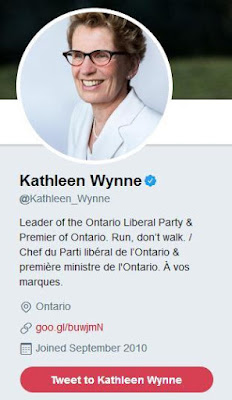 The story of her own journey towards sexual self-actualization certainly came at a heavy cost to others. And it just goes to show that despite what the right-on MSM keep telling us, "rainbow families" aren't always full of joy, harmony and love. 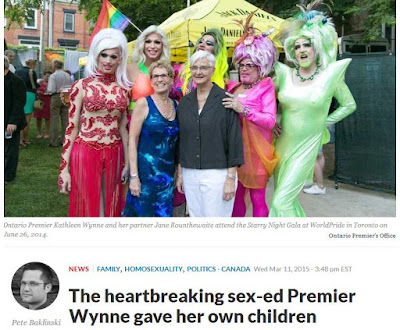 Posted by MattHaydenAU at 11:13 AM No comments: