It's not surprising that the ABC decided Maurice Newman's complaints about Robyn Williams linking climate change skepticism to pedophilia have no validity. Their reaction is just so typically leftist. PC luvvies habitually use the most extreme analogies in order to denigrate their opponents, but then shriek and squawk up a storm if the same tactic is used against them.

Remember all the hyperventilating that occurred when Cory Bernardi linked gay marriage to zoophilia? The guy was sledged all over the Oz meeja, and was even demoted as a result of his statements. Yet while even some conservatives might have considered his comments extreme, they were tame compared to Williams's smearing of Newman and his intellectual ilk.

Bernardi's linkage was at least category-consistent, since both gay marriage and zoophilia pertain to sexual behaviour. He also alluded to some actual evidence, namely that there are influential people out there who see nothing wrong with humans schtupping animals -- Peter Singer, philosophical father of the Greens, being one. Compared to this, Williams's sliming of climate skeptics was right out of the ballpark.

In any case it's interesting how fond lefties are of their pedo smears. They tend to equate anything they don't like with sex with children almost as often as they do with racism and Nazism. Take this intriguing bit of graffiti in the Hay St Mall, for example. Not quite sure what the activist was trying to get at, but I think it's a safe bet he had some issues with the likes of Coke and Pepsi. 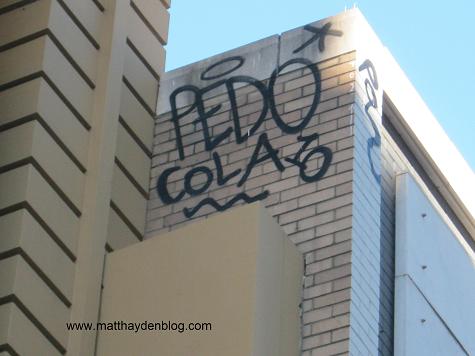 Pity he didn't make his point more eloquently. Getting up there was no mean feat. 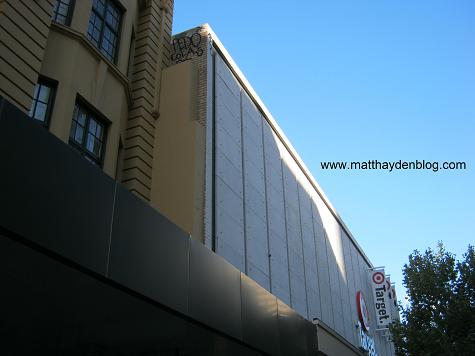 So, what he lacked in coherence he certainly made up for in chutzpah. Have to give him a few cool points for that ...
Posted by MattHaydenAU at 2:51 PM No comments:

One area of policy about which both conservatives and liberals often agree is gun control. Liberals (lefties in Oz) are all for it all the time, even more so when a horrific mass shooting occurs. And, particularly in the wake of these terrible events, many conservatives also demand sweeping legislative changes.

The best known local example was John Howard's reaction to the 1996 Port Arthur massacre. Now, after this Sandy Hook massacre, conservatives such as Miranda Devine are sounding very leftish.

I certainly sympathize. When you learn of the mass murder of children it's hard to stand up for the rights of gun owners. That's because your emotions are engaged. "God, this is too horrible," you think. "Politicians have to do something, anything, to at least try to stop such a thing ever happening again."

But if you look at the situation rationally it's hard not to conclude that lives could have been saved if there had been another armed citizen there at the scene. Hell, most people right across the political spectrum -- except for maybe some uber-leftie mega-saps -- would have been all for a security guard, cop, or army sniper taking out Adam Lanza immediately after he started firing (or even before he managed to kill anyone at all). He'd be feted as a hero if he did so. So why are they so appalled at the thought of a civilian doing exactly the same thing?

I think there are two kinds of irrationality at work here. There's the general belief that guns are evil in and of themselves which is what lefties in particular are most prone to. Then there's this idea that guns are okay, but only in the officially approved hands of cops, soldiers and the like. Conservatives, being respectful of institutional authority, often succumb to this fallacy.

But we know for a fact that many millions of people do own guns in western countries. The vast majority of them never use them for evil purposes. And surely killing a mass murderer early on in his shooting spree would not only not be an evil purpose, but an extremely good and admirable one -- regardless of whether the person firing the gun is wearing a uniform or not.
Posted by MattHaydenAU at 1:43 PM 13 comments:

Gillard's end of the world spoof is life imitating satire

I'm sure you've heard about Julia Gillard's allegedly tongue-in-cheek address to the nation about the impending catastrophe predicted by the Mayan calendar. It's such a stunningly stupid stunt my eyes started to bleed after I watched it. It's actually beyond cringe-worthy and even beats Craig Emerson's "No Whyalla Wipeout" as the most tragic publicity stunt by an Australian politician so far this century.

Countless people must be scratching their heads about why she's done this. I think her spin doctors have put her up to it to maintain her support amongst the sneering hipster demographic. But what's the point of that? It's a given anyway ... They're probably trying to get the focus off all this AWU stuff, too.

Whatever the motivation behind making the video, it's embarrassing in the extreme. Any non-moron would be wondering what on Earth it has to do with running the country. Can you imagine John Howard or even Paul Keating doing something so frivolous, puerile and totally unfunny?

The saddest thing about it is her droid-like delivery. She reads her lines in the same completely emotionless way that she announces her stupid failed policies.

You'd think that she'd know that for it to work as comedy it requires a bit of wit and oomph in the delivery. Apparently not.

And she's pretending to announce the end of the world, remember. Where's the mock-seriousness? She managed to summon something that seemed sorta heartfelt for her embarrassing suck-speech to the Yanks a while back (which actually was funny, for all the wrong reasons). Why not do a bit of pseudo-emoting here?

It's just sooo Gillard. Whatever she does she does not only badly, but in the most thoroughly inept manner possible. The only things she's good at are knifing people in the back, lying shamelessly and hanging onto power at all costs.

And I wonder who wrote it, by the way? Presumably someone on staff at Triple J. More of your hard-earned taxes at work, people ...

A victim of sleaze and smear who's done nothing wrong

Just watched Julia Gillard on Meet the Press. Paul Bongiorno not only raised the issue of the AWU scandal, but even asked her some questions about her honesty. Amazing!

As usual she stonewalled, constantly repeating phrases about Abbott's negativity, how she'd done nothing wrong, and her current fave, the Coalition's "sleze and smear" tactics. (Hell, she must have repeated that last one about a dozen times.)

Rattling off these lines one after the other is all she ever does when asked about the issue. Her approach is utterly mind-numbing.

Actually, I think that is one of its aims ... It's as if she's attempting to just grind down any interest in her involvement in the scandal by sheer, bloody-minded persistence. She sees it as a battle of wills. She's decided to just dig her heels in and hang on until her critics throw their hands up in exasperation and walk away. That always worked in the past, she figures, so she'll just keep using it now.

But I think this tactic is past its use-by date. The AWU scandal has already gathered heaps of momentum in the media, with formerly obsequious journos now daring to probe her on it -- and there's still so much more to come out. The Opposition know that the more she stonewalls on the issue the dodgier she looks to the electorate, who are finally getting interested in it in a big way.

Of course the constant mantra of "I did nothing wrong" and "Abbott's a negative misogynist using sleaze and smear against me" will continue to work on the Labor-loving moron demographic. But they're the only ones buying it now, I reckon.
Posted by MattHaydenAU at 12:57 PM 9 comments: