It's absolutely astonishing that TPTB keep pressing on relentlessly with the massive fear campaign to push us all into this vaccination passport hellscape. Everything is completely upside down. The whole idea that vaccines will bring normality back is utterly creepy and wrong.

Advocates of the sinister system such as Tony Blair repeat the lie that the vaccine passports are our "path to liberty". How can you be free to travel, work, go to the pub and do many other things if you need some kind of certificate? Also, that ticket requires that you accept being a lab rat, and have injected into your body radical medical technology that has not been tested.

Our zombie-like "leaders" both right and left keep running this fraudulent line of argument. Child-brained Albo assumes the public has bought the lie entirely and has been trying hard to get political mileage out of it. He says that vaccines are our "ticket back to normal". 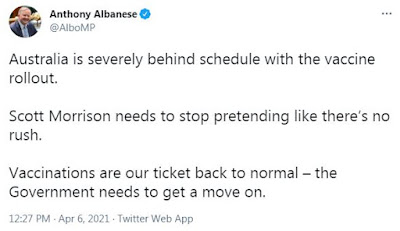 Norman the Needlefreak is not as thick as Albo, which is why he's getting worried. He realizes that people are losing trust in the MSM and "public health" authorities. In other words, they are waking up.

They are seeing that the so-called experts are anything but. They are not rational healthcare professionals but useful idiots being bossed around by globalist control freaks with a truly sinister agenda.

Of course he doesn't want to admit this. So he has to blame News Ltd. Sad!

Speaking of this loss of trust: The Southbank Ken Doll sees a real world example of this and is alarmed enough to alert his robodolt followers.
Actually, it's prolly the closest thing he's done to dinkum journalism in quite a while. So, a good sign ... Baby steps. But it's a start!

Patricia Karvelas is worried about "vaccine hesitancy". But this is just another term for "sanity".
Why shouldn't healthy people be hesitant about something that is experimental, radical in its function, and not needed anyway because their immune systems can cope with the dreaded 'rona if hit by it "in the wild"?
So ironic that the activist journalists at their ABC are always arcing up about the perils of big business, and how it has the potential to run roughshod over human rights, etc. Isn't this a perfect example?

Tim Soutphommasane recognizes that we're in a dire situation. But it's not the pandemic that's done this. It's the insane, fascist control tactics such as lockdowns, masks and other kinds of bullying that have been inflicted on us for no reason at all.

At least he didn't blame racism. Though I'm sure he'll figure out how to do that in time ...

In one sense it's depressing that so many in politics and the MSM are so completely controlled by this globalist agenda. However, the more insane things get the weaker their mass mind-control becomes.
Many of them do know that what they're advocating is evil. I noticed this several weeks ago and made the video below about it. Being the loathsome jellybacks they are they lack the courage to break free from the narrative themselves. Nevertheless they will keep waking up more and more Aussies by continuing to pedal it.
Thanks for reading, and if you've enjoyed this piece, please consider supporting me via Ko-fi. Aussies, know your rights!
Posted by MattHaydenAU at 12:58 PM 1 comment: