Living in Perth as I do, I just had to head down to CHOGM to check out the activist action on Friday. I have to say I was intrigued by the poster that had been up at various locations for quite a while. 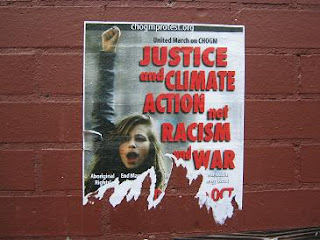 The doe-eyed babe shown sassily speaking truth to power was undeniably striking. Would I see such a graceful and feisty creature prancing among the Occupy Perth, anti-CHOGM throng?

Sadly, no. It seems that at the typical leftist watering hole there are no gazelles, only, er, wildebeest.

I had a wander through the crowd: 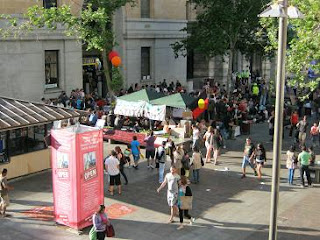 It was disappointingly small, particularly when you consider how much promotion had been done for the demo -- as well as all the media attention it had received. 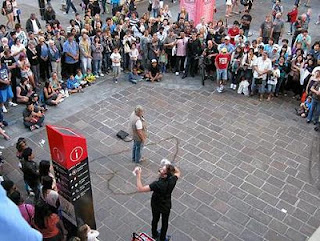 Tellingly, the busker who showed up completely unannounced managed to pull a much bigger crowd -- and a more racially diverse one at that. (As is usually the case at such purportedly anti-racist gatherings, smug middle class whitey-tighties formed the overwhelming majority.)

Events such as the CHOGM protest have a reputation for producing some classic silly signs. And this one did not disappoint. To be honest I felt a little guilty taking photographs of them only because I thought they were so bloody stupid (and intended to say so on this blog). But those holding them seemed quite chuffed that I was doing so. Really, it was like taking candy from a baby -- and a sleeping one at that.

Anyway, for your amusement, here's an assortment: 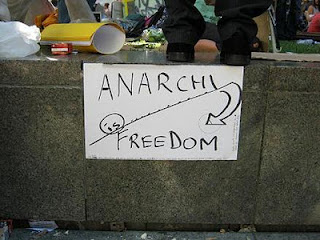 And monarchi is slavery ... which is clearly why the Queen seems never to have been so popular in Australia as she is now. 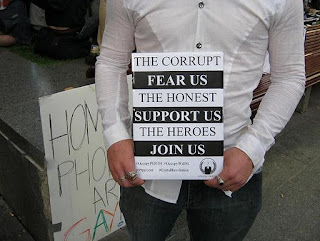 I must admit that I was keen to join these brave cyberspace warriors and become a hero too! 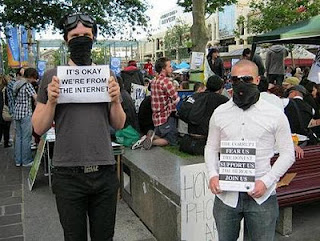 But how could I do that if I didn't know who they were?

One guy was big on quoting lauded wordsmiths of yore: 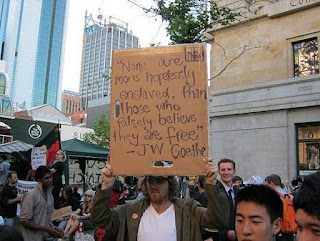 Spot on. To which I'd like to add: And none are more hopelessly misguided than those who falsely believe they are changing the world .. by holding up signs.

I can't be sure, but I think this same guy produced a couple of others with a literary bent. 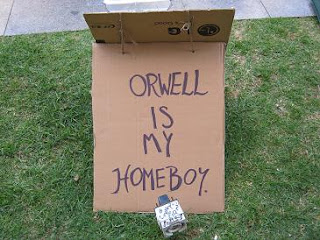 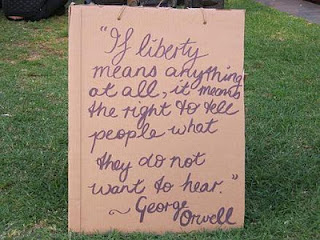 Considering that the joint was chockas with people who were no doubt pleased as punch about the silencing of Andrew Bolt, and that placard was only metres away from a flag proudly displaying the hammer and sickle, it did seem more than a tad ironic and sinister ... 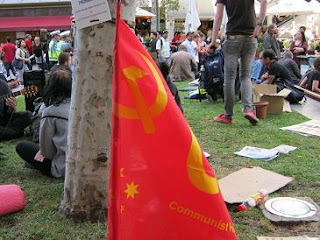 Still, I shouldn't be too hard on the signs. Some of them were quite sad, and did induce feelings of pity. Like these poor waifs who had been abandoned by their creators. They were all apologetic and huddling together for comfort: 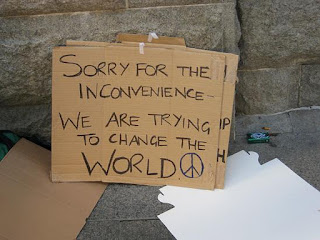 The banners were highly entertaining as well -- particularly when seen in context. Take the one below: 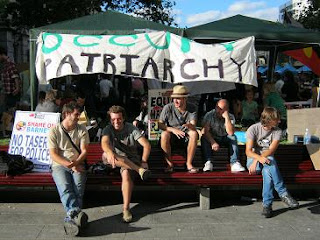 I mean, where were the women?

Hmm. Perhaps the five white blokes were all attitudinally reconstructed male feminists, and they were taking a brave stand sit?

Though somehow I think that's unlikely. A much better explanation: This was an invasion by obnoxious misogynous phallocrats determined to crush the rebellion. If so, then this must be the only photograph of the actual patriarchy ever taken!

Take a good look at their faces, sisters. Those are the five guys who've been oppressing you all these eons. 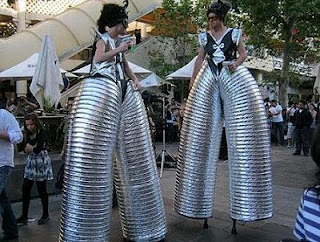 The WA police force did have some officers determined to infiltrate the demo by posing as activists. Clearly, the operation failed. 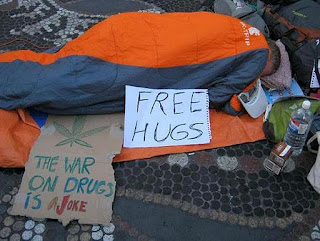 Considering the rather inactive condition of the, er, activist shown above, it would be reasonable to conclude that the sign had been placed there by another protestor as some sort of cruel attempt at humour.

Nah! Impossible. Leftists are compassionate, remember. Only a nasty conservative could have done such a hateful thing. 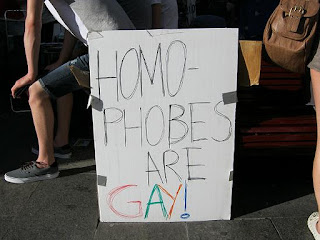 Well, one can only wonder what this was meant to mean ...

Either way, clearly a hate crime has been committed. Justice Mordy Bromberg and Ron Merkel QC, your next high profile show trial awaits!

Posted by MattHaydenAU at 1:36 PM 2 comments:

Just re this Qantas crisis: The unions are of course outraged about the fleet grounding and there is much talk that Alan Joyce is "holding the nation to ransom". They seem most annoyed by the fact that he's done the ol' switcheroo on them. But by grounding the fleet he's effectively "downing tools", which is something that unionists do with monotonous regularity. They think going on strike is fine for employees, but they can't stand it when employers do it.

As well as union outrage, many on the green left are seething with contempt for Joyce and what he has done. But isn't this a great thing for the planet? Think of all those greenhouse gases that are now not being spewed into the atmosphere. If the grounding keeps going for weeks or even months, it will do more to prevent global warming than the carbon tax could ever do. The effect of taking all those planes out of the air must be akin to taking 45 million cars off the road, at least. Bloke's a climate change hero, surely.
Posted by MattHaydenAU at 10:59 AM No comments:

Every week in Perth there seems to be another violent home invasion. Not content to permanently traumatize the owners of the homes they've broken into, the thugs who carry out these acts often beat them as well. Sometimes the victims are elderly. It's truly depressing, and you wonder how anyone could be so lacking in humanity as to do such a thing.

But it is heartening to know that the crims don't get to rob, bash, bully or terrify every oldster they encounter. Take the case of this burglary in Alexander Heights. It went horribly awry for the perpetrators when a senior citizen turned out to be more combative than most people half his age, and sent them scurrying by brandishing a baseball bat. Said the fit great-grandfather:

"They [the burglars] were in my garage and it's just a step up into the house, where I have a terrified wife in her 60s. I would use any means to protect my home. The judicial system is a joke."

The dreaded carbon tax has been passed by the Lower House. Gillard and company are arrogant enough to think that Aussies will eventually get used to it and Labor will rise again in the polls. But she just made a lot of people who were pissed off to begin with utterly ropeable. There's no way she'll ever get them back. Nor will any other Labor leader. We all know that Labor is toast, but it will be burnt to a crisp now for sure at the next election.

And if, as some pundits have said, there are lots of sneaky little conditions written into the legislation that make it really hard to dismantle, then this anger towards Labor will go on and on as long as any part of it lives.

Of course Many Labor MPs are now ruing the day that Gillard went back on her pledge not to introduce the carbon tax, even while pretending to support her. But I think they'll still be deeply regretting the breaking of her promise even years from now.

I don't know that Labor will actually die as a major force because of the carbon tax. But it could come scarily close.
Posted by MattHaydenAU at 11:03 AM No comments:

Reaction to Carl O'Callaghan's comments nothing short of staggering

In the context of what's just happened to Andrew Bolt, it's not unreasonable to suspect that it won't be long before a prominent public official is charged under the Racial Discrimination Act. I'm no legal boffin, so maybe they're immune to this. Still, you've got to wonder about the possibility ...

I mean, have a look at the outraged reaction to recent, very reasonable comments by WA Police Commissioner Carl O'Callaghan. Because he characterized the level of offending by juvenile Aborigines (61% of the state's total for the age group) as "nothing short of staggering" the WA Aboriginal Legal Service chief Dennis Eggington was outraged:

"All it will do is feed the fears of the general community about young indigenous men in the state.

"I'm flabbergasted the commissioner would come out and feed those fears and maybe even incite some racial hatred. It's unbelievable."

Considering what a small percentage of the state's population Aborigines constitute, that's an accurate way to describe the scale of the social problem. And how will you ever be able to fix it if you can't actually describe it?

I think it's disgraceful that Eggington is focusing on the perceived offensiveness of the comments, rather than trying to address the depressing reality they convey. Sadly, many Aboriginal activists immediately react in this way. This entrenched fear of straight talk is a disaster for their people, and the evidence abounds.

At least O'Callaghan is still free to make these comments. But considering the growing power of the thought police, you have to wonder how long it will be before such comments are legally silenced.
Posted by MattHaydenAU at 10:56 AM No comments: