MSM's fake news is being called out in Australia and America. The hacks hate it!

So on Insiders this morning Andrew Probyn expressed his pique about politicians using the term “fake news”. I'm sure he's also pissed off about punters doing the same. And no wonder …

He, along with his peers have long been widely trusted as truth tellers reporting the facts without fear or favour. But now that everyone's got social media to fact check 'em, or do their own reporting (and faster) it's patently obvious that the MSM have been routinely cranking out biased BS on a grand scale for decades, and continue to do so.

►@andrewprobyn: Every politician that says “fake news” has to be called out for it. #Insiders #auspol pic.twitter.com/YJ0ZwIPChY
— Insiders ABC (@InsidersABC) May 21, 2017

They're massively butthurt that they “don't get no respect!” anymore. What a laugh! The muppets don't deserve any. We're all kicking ourselves that we believed them for so long … I'm glad they're upset that we're onto them. Their tears taste sweet! And we should continue to call out their fake news (and very fake news!) at every opportunity.

While their relentless pushing of false narratives is a scourge here in Australia, it's a fricken pandemic in the USA!

So clear that the American deep state is desperate to get rid of Trump because they know they can't control him. So they, along with the Democrats (who simply have not accepted that they were beaten fair and square by The Donald and now exist in a psychotic bubble of total denial) have built up this “Russian hacking” bollocks.

The MSM over there are not just a tad biased toward the Democrats. They're like Pravda was for the Kremlin! They are in “destroy Trump at all costs!” mode, and lose it when they meet any resistance.

"If he took a dump on his desk you would defend it." 💩@andersoncooper what? 😲 pic.twitter.com/nD8ZfZKtVN
— Salvador Hernandez (@SalHernandez) May 20, 2017

Forgive me for extending his scatological reference, dear readers. But if Hillary Clinton took a dump on “Pooper” Cooper's own desk, I reckon he would gladly eat it!

He and his fellow presstitutes have turned the stated goals of their profession upside down. They willingly repeat obvious fictions as if they were fact. And they spend most of their time desperately trying to discredit credible claims of corruption and criminality on the part of the Democrats.

There are many of these. But the most compelling of late are those related to the mysterious murder of Seth Rich. It's almost certain that he was the one who sent all those hugely damaging e-mails to Wikileaks -- which kills the Russian hacking angle as dead as poor Seth himself. Not only that, there's been all manner of stonewalling by the authorities in regards to the details of his demise, access to CCTV and bodycam footage and the like.

If that isn't suss as all get out I'm Clementine Ford.

Surely any journalist worth his salt would be doing all he could to find out what actually happened to this poor guy and why. FFS, on the face of it, it makes Watergate look like a parking infringement. But almost every big name reporter and pundit in America is pushing this angle that Putin and palskis “hacked the election”, while never citing any actual evidence.

Speaking of which: check out this gargle by their ABC's Sara James. In it, she equates the big fat nothing burger of Trump's ties to Bad Vlad with Nixon's notorious, documented crimes. Poor chick has clearly been watching too many thrillers.

And she's not the only one regurgitating the corrupt American liberal media lies for a local audience. Their ABC “journalists” breathlessly repeat the Russia angle in doom-laden tones every day, while completely ignoring the Seth Rich stuff.

Sara, just keep cranking out the fake news, babe. We'll keep calling you and your fellow shills out in it. You're losing your undeserved authority by the day and it's a hoot!

Lefties across the globe are freaking out big time because of Trump's stunning victory. Then there was Brexit. Marine Le Pen is gathering momentum in France, too. And here in Oz, they are packin' death at the rise of populists like Hanson, Bernardi and others -- while continually portraying this as nothing to worry about. Local lefties, many of whom are millennials, are facing an international wave of opposition on a scale they mostly haven't encountered before.

And as we all know, when the going gets tough the Left gets, er, shouty (or more accurately, even shoutier than usual). They like to think this decibel-raising will result in a commensurate lift in collective consciousness. But all it really does is increase local rates of hearing loss.

These shriek-fests are heavily promoted, with posters being their fave method. You often see slickly produced posters all over Sydney's Inner West, a socialist stronghold. (The ones shown here were on a post box in Norton St, Leichhardt.) 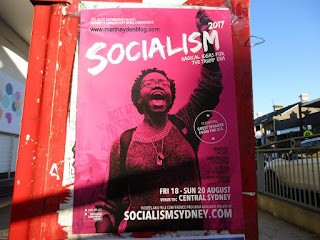 Love the fact it's a black chick getting all bolshie in this shot. Funny, because whitey-tighties will vastly outnumber those with darker skin at most leftie shindigs -- especially in the upper echelons of the groups behind them. The Greens party itself is a good example. "The Whites" would be a better name for them.

Might be hard to see on this blog, but the poster mentions a mystery speaker from the USA ... Hmm. I wonder who that is ... Maybe it's Hillary Clinton? She does have a lot of free time on her hands these days. Also, she's desperate to get the message out that her stunning loss to Trump had absolutely nothing to do with her noxious personality, putrid history of corruption, and toxic politics, and everything to do with Putin, the FBI -- and misogyny, natch.

Though, prolly not her when you remember her usual speaking fees. She's kinda like a superdupermodel, really. Doesn't get out of bed for under a hundred grand. 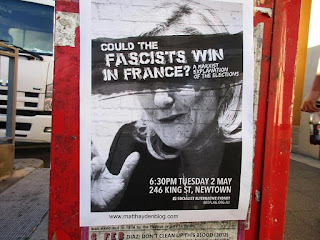 Could the fascists win in France?

Well, I'm sure millions of Frenchmen are determined to prevent that outcome. Which is why they're voting for Marine Le Pen.

If anyone fits the label fascist it's the Islamist terrorists and their creepy globalist enablers, after all. It's certainly not Ms Le Pen herself, who, while obviously a nationalist, can barely even be described as "far-right". 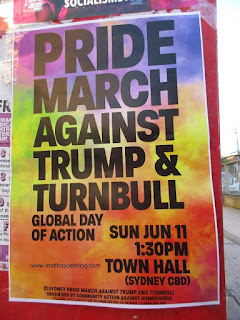 And what pinko poster collection would be complete without one for a gay pride march (which will no doubt feature demands for "marriage equality")? Sheesh, it's like Q and A, innit?

Seems odd that they're whining about Trump. He's hardly a traditional conservative ideologue and isn't implacably opposed to gay marriage. Even sillier for gay rights activists to rail at Turnbull, who is desperate to stay in their good books and is only sticking to the plebiscite because he knows that he'll plummet even further in the polls if he doesn't.

Still, coherence was never the PC Left's strong suit -- unlike mass wailing and gnashing of teeth ...
Posted by MattHaydenAU at 12:33 PM No comments: