Across the West ideological battles are becoming spiritual ones

I find it fascinating how politics in the West -- America especially -- has transformed massively in the last coupla years. It's gone from the old left versus right paradigm to globalism versus nationalism. And it seems to be progressing even further into a religious, spiritual war.

And I'm not just referring to Islam, and how its more zealous believers are using our freedoms against us. It's more about a strong and very unsettling feeling that rapidly increasing numbers of people now have that there are truly evil forces at work across the globe, ones that have gone undetected for decades.

Take for example the whole issue of human trafficking. By following updates from "Q" -- who is actually dinkum and not some crazy "conspiracy theory" as the MSM would have you believe -- we've learned that many well known, well respected organizations are actually fronts for this sickening global industry and that "Swamp"-dwelling politicians (both Democrat and Republican) have been involved in it indirectly for decades.

Obviously you don't have to be a Christian to see this trade as evil and to support Trump's efforts to shut it all down. That said, Christians are yugely supportive of their POTUS for this reason (among others) and they often proudly proclaim their faith along with #MAGA in their social media profiles.

And while not all Trump-haters are anti-Christian (some are even God-botherers themselves) there seem to be a high percentage who are. Sounds utterly barking but, yes, there are many powerful and influential people -- including numerous Hollywood slebs -- who dinkum worship Lucifer! They often flash devil horn gestures; cover one eye, etc. Such a creepy bunch of narcissists. 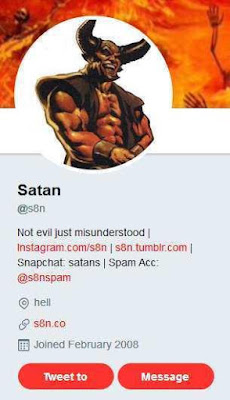 Being a non-religious person myself it took me quite a while to get my head around this. It sounds too absurd to be true. But it makes perfect (irrational) "sense" when you think about it. If you wanna destroy Western civilization, which the globalist, PC Left clearly does, then you're gonna have to take down its Christian foundations.

A generalized atheism is simply not focused enough for that task. That's like using a brick to kill a bug, because it negates all religion. Also, it's entirely negative (no God). Having some kind of faith is much more powerful, unifying and positive. Which is why, among cultural heavy hitters of Hollywood etc, Satan is so hot right now!

Obviously they're not all card-carrying, goat-fondling Luciferians. And many of those who are are clearly not yet ready to come out of the, er, dungeon. Remember that occult just means "hidden", and dark power is meant to be wielded from the shadows. Paradoxically, that's how they manage to get away with so much "in plain sight".

I think most of these people don't actually worship evil; they are just being manipulated by those who do. They really have sold their souls for fame, money and power. And they're just doing their dark masters' bidding.

That's why so many slebs are saying such vile things about Trump. They're also producing some truly alarming images in their art. Take this creepy clip from Celine Dion.

Read that post and you'll be in no doubt whatsoever that there's something truly sick and sinister going on.
Posted by MattHaydenAU at 9:46 AM 1 comment: