Kevin Rudd is really packing his dacks over QAnon. He's been mentioning the so-called "conspiracy theory" a lot lately in tweets. Other local blue checks have as well, but it seems that Rudd is more worried about it than all of them.

As we all know, he's obsessed with evil Rupert as well. I really don't think he needs to worry there, though. Murdoch is fully on board with the mandatory vaccine agenda among other globalist projects, even if he does let some of his star columnists rail against climate change, cultural Marxism and some other issues.

IMO he's shitting bricks Murdoch will get his journos to actually do some investigative reporting on his time as PM, back when Obama was POTUS and Hillary Clinton was Secretary of State.

Looks like he's full of dread about a potential flood of damaging information from this double threat. That's why he recently shared a segment from purported comedian Trevor Noah. Needless to say, the Daily Show clip is a nasty, witless, laugh free zone. Trembling Trev and his fellow controlled arsehats in the USA mind-control system are even more terrified of QAnon than Rudd is. That's because it offers alternatives to the Deep State-controlled false narratives they pump out relentlessly.

Noah's production team have obviously been given orders to really go after Marjorie Taylor Greene with as much hate-filled mockery as possible. By becoming elected, she adds political weight to the narrative threat that Q presents. They are frantic. 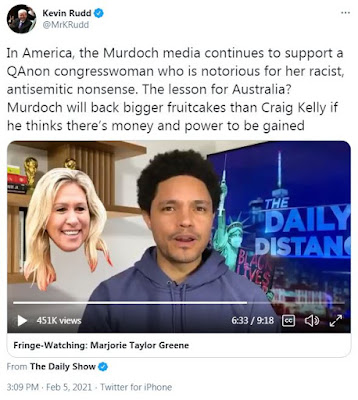 In that segment above that Rudd shared, Noah goes all out to demonize her as much as possible. He says she's racist, anti-Semitic, a dangerous gun nut. And right at the peak of his hateful and hopelessly unfunny routine, her head appears behind him.

They've chosen a shot in which she was wearing a red top for plausible deniability, but look closely at it. Some of the colour is clearly bleeding into her blonde locks. And I do mean bleeding.

It's quite obviously incitement in the style of Kathy Griffin here. 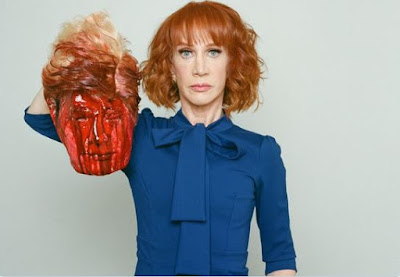 Of course these sneering lefties have done this in such a way that they can back away and claim that there's no such intent. "What an Earth are you saying? How could you possibly believe such a thing? It's because she's got a red top on ... Your bigotry against a comedian of colour is making you see things, you paranoid racist wingnut!"
But you can be sure that if the roles were reversed and, say, Murdoch-owned show had a similar shot of AOC behind a comic mocking her then every other MSM platform would be calling it incitement, demanding prosecution or a grovelling apology at least. (Actually, no such segment would even be aired on MSM, proving how globalist-controlled it is. But you get my drift.)
Speaking of AOC: Noah himself did a piss-weak piece on her harrowing near death experience, taking it all seriously, throwing in some lame gags, none of which questioned her credibility. 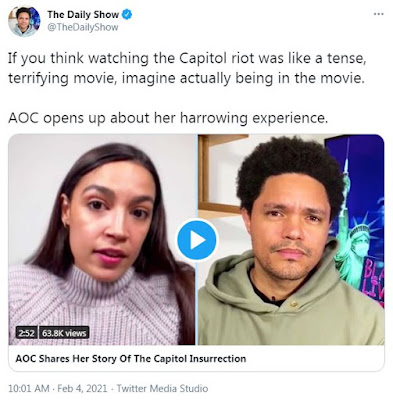 If he were a dinkum satirist and not just another smug, talentless tool of the Deep State he'd go to town on her ridiculous lies. FFS, she wasn't even in the building at the time!
The Occasional Cortex clip was tragically lame. But the one Rudd tweeted was sinister as. Maybe he didn't watch it all the way through, which is why he shared it. Although maybe he did, and that is why?
Either way, a bad look. He's getting desperate and it shows.

Posted by MattHaydenAU at 1:02 PM No comments: