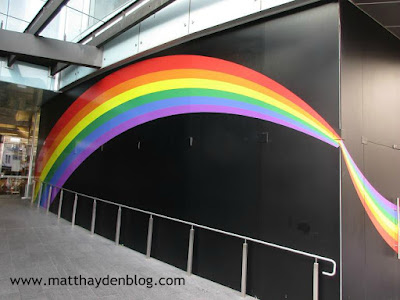 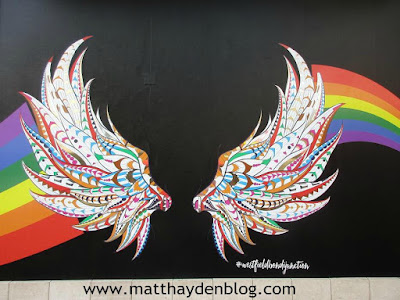 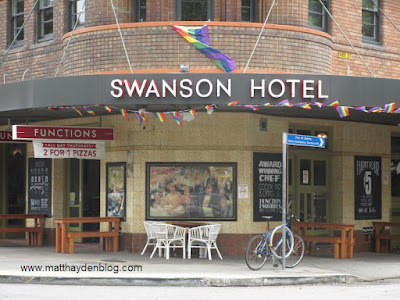 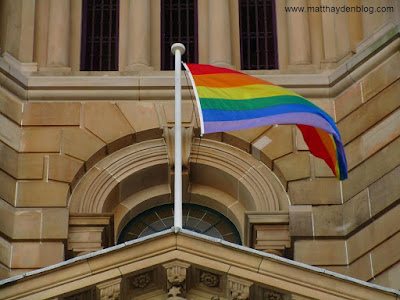 Dunno 'bout you. But as far as I'm concerned these joyless totalitarians have completely ruined the rainbow. I will never be able to look at a real one in the same way again.
Posted by MattHaydenAU at 6:49 AM 1 comment:

City of Sydney's offer of free SSM venues is anti-equality

Pretty clear that the Yes side have little intellectual confidence in their own position. That's one of the reasons they're so determined to shout down the opposition. Basically, they don't want Australians to hear the No case. People are much more likely to actually think things through then. If they do that, they'll almost certainly vote no.

Of course the Yes side's approach isn't entirely about censoring their opponents. They do offer some positive reasons we should totally overturn thousands of years of tradition. Their argument -- if you could call it that -- has two main elements.

The first is highly emotive: "It's all about love." So simplistic! Marriage is clearly more complex than that ... In any case, the most zealous SSM advocates don't really mean it. Their side has shown far more hatred for their opponents than the other way around.

Their other favourite catchphrase is “equality”. Again, they are mostly insincere. To say that their behaviour is Orwellian in this regard is not a stretch. In their minds, all people are equal, but some are more equal than others. 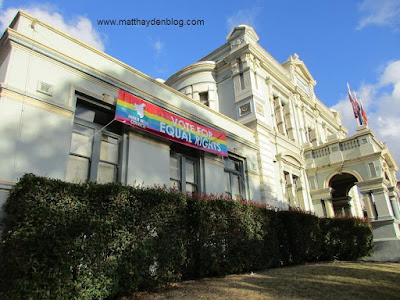 A vivid example of this double standard is the offer by City of Sydney for free marriage venue hire for same sex couples if the Yes side wins.

Its proponents have painted resistance to it as an overreaction, claiming that it's just a celebratory measure ... Well, even if it is, it's still a big thing. Hiring out public spaces for weddings from the City of Sydney will set you back several hundred bucks at least. So, saying that only straight couples must cough up is pretty rich. Also, most ratepayers are breeders. So, in a way they'll be forking out for the rainbow weddings even if they themselves don't get hitched.

And frankly I don't trust them to make it last only a short while. Lefties have form on making temporary measures permanent, then ratcheting up their demands.

As with so much of their obnoxious behaviour it really makes you wonder: If they are this brazen now in their desire for discrimination, what other plans do they have in mind? Having won the right to marry, will they then demand that the institution itself be only for the LGBTIQ crowd? Will they demand that straights be banished from it?

If they do get their way and eventually there is a concerted push to deny marriage to heterosexual couples I won't be surprised. If anyone had said that even a year ago I would have thought the idea completely absurd. Now I'm not so sure.
Posted by MattHaydenAU at 2:09 PM 1 comment:

Twitter is an awesome tool in many ways. But it's particularly good for anyone interested in current affairs. Its lightning speed makes it the best place to break news, or learn about it. The 140 character limit means users must get straight to the point, too. If you can make a powerful point in a unique way you'll stand out from the pack.

The best people to follow are those who do this on a regular basis, combining wit and insight with compelling information. With this in mind I've decided to list some of my favourite tweeps, starting with those from America. 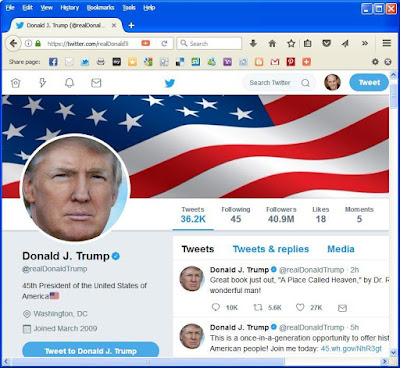 Donald J Trump Being POTUS, his tweets are significant as a matter of course. His abrasive directness, and the fact that his Twitter feed triggers so many snowflakes, makes him hugely entertaining as well.
Dinesh D'Souza Great writer with a fascinating book about how the Left in America have managed to smear their opposition as fascist, when they themselves are far more deserving of the term.
Ann Coulter Another brilliant writer. Has a knack for making her pithy points with laugh-out loud funny tweets.
Mike Cernovich Fearless, prolific new media mogul with some very well placed sources. Breaks lots of significant stories.
James Woods Legendary actor. Relentless in his attacks on the Clintons in particular. Blocks trolls with flare.
Ben Shapiro Super smart conservative with awesome debating skills.
Bill Mitchell Big time Trump fan. Prolific tweeter and Periscoper with a knack for using metaphor.
Ben Garrison Highly skilled and incisive cartoonist.
Kurt Schlichter Funny writer with a military and legal background.
Roger Stone Long time political insider who worked for Richard Nixon. Lefties hate his guts and the feeling is clearly mutual. Doesn't hold back in his ongoing stoushes with them.

So, there are ten brilliant tweeps for you to check out if you haven't already. Will compile other lists in future.
Posted by MattHaydenAU at 12:05 PM No comments:

Newtown hipsters lay down the law: It's not okay to vote no!

About a month ago I saw a guy at Newtown station with a sign reading “It's okay to say no”. I found this so intriguing that I took a photo of him and wrote a Facebook update about it (included at the bottom of this post). As I explained then, at that point he hadn't copped any abuse from the Newtown locals.

Anyhoo, yesterday I was at the Italian Forum in Leichhardt and I bumped into him again. 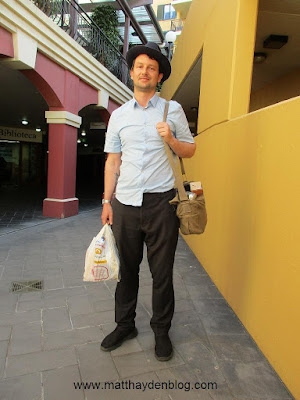 Curious about how that exercize with the sign panned out I asked him if he eventually did end up copping any snark. He said he most certainly did. He was spat on, harangued, told he had no right to have his opinion ... After a while he got so sick of the abuse that he just gave up and left. (BTW, he mentioned that he changed it to read "it's okay to vote no", which is maybe why no one had been triggered at the time I saw him.)

I asked him what these people were like. We're they all social justice warriors with blue hair?

He said no, many looked like normal folk -- there were some old people and even children!

So, my worst suspicions were confirmed. Heaps of people totally brainwashed by the Yes side. Sure, the inner west of Sydney is chockas with sneering hipsters. Even so, there's clearly something sinister going on here. It's Orwellian for sure.

Speaking of which, expand the comments on the original FB post below. You'll notice some trolling by ABC journalist Peter Lloyd. He actually says those against SSM have “no right to express a view"! FFS. (To his credit though, he conceded that he could be described as a "neo-bigot". Well, at least he's honest ...)

Still, his petty contributions are not a good look. And if he was "working" at their ABC while he wrote them then that's even worse.

Why should taxpayers fund infantile trolling of those whose only crime is to defend the law of the land, and say we all have a right to express our opinion without being shouted down?

Posted by MattHaydenAU at 12:58 PM No comments: