Globalist warmists need to get in the bin!

The older I get the more I realize that the grand goal of all politically correct leftism (cultural Marxism) is global domination. Most who subscribe to this mind-numbing ideology prolly aren't looking that far ahead -- they're just obeying orders. But the creepy control freaks at the top of the power pyramid most definitely are.

When you accept that all their campaigns are connected by this aim much of the craziness going on in the world today makes a weird kinda sense. All the PC madness -- global warmism in particular -- is ultimately about eroding the distinct character and identity of each and every nation so that evil megalomaniacs can replace them all with a top-down, centralized, totalitarian control system or "New World Order".

The whole idea is creepy and wrong, obviously. It's very clear that this is the final goal from lefties' overwhelming support for supranational bodies like the European Union and the United Nations. And this comes through loud and clear in the symbolism and imagery they use in their promotional posters.

Living in a very left-leaning area (Sydney's inner west) I see a lot of this -- particularly on rubbish bins. Check out the one I saw recently next to Petersham Station. 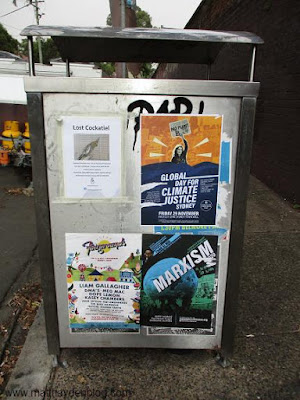 Notice how both the ads invoke the idea of globalism -- the first verbally and the second visually. 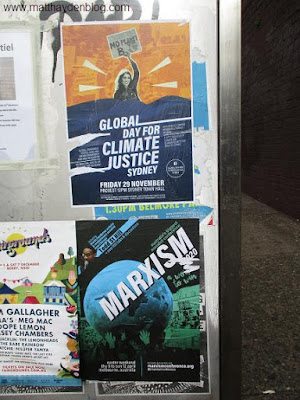 Just on the big blue inflatable globe pictured in the bottom poster: I think this was actually the one that was being bounced around at last year's Climate Strike demo outside the Sydney Town Hall. I was there and captured the scene on video.

Yeah, riiight! The kids may have had that goal, having sincerely believed the warmist con. But for politicians like Clover Moore it's just the brazen claim you make to get what you really want: power over the masses. (Speaking of which, you can see Kerryn Phelps on the dais with her. It's well known that they absolutely hate each other's guts. Says heaps that the thing that enabled them to briefly bury the hatchet was their shared lust for control of the minds of sprogs gained by telling them massive lies about the impending climate apocalypse. Sad!)

Sooo depressing that someone so clearly deranged has been elected as Lord Mayor, and several times. She claims at the end of the vid that she is on track to ensure the City of Sydney is powered by 100% renewables by 2020. She is clearly thinking globally, but acting locally. This makes her daft and comical.

But imagine if she had real power on the world stage to realize her utopian dreams? Think of the massive damage she would do, without giving it a second thought. Terrifying!


Posted by MattHaydenAU at 1:15 PM No comments:

The longer this whole fire crisis continues, the more I'm convinced it's a giant psyop. The sheer number of arson attacks this year is really suss and should be the actual story that the mainstream media are investigating, and aggressively. But as usual they are cranking out the fake news.

The big "story" is how so many people are totes angry with ScoMo because he buggered off to Hawaii with his family as the fires raged. But this crowd is not representative of the rest of Oz. They are mostly the usual whining lefties on social media. And if they care so much why don't they help put out fires themselves, like Tony Abbott does every year?

No way. Too much effort. And not only do they (and the media) ignore Tony for doing this, they've even been known to condemn him for it. If ScoMo had joined Abbott they would've mocked him for that too.

The Greens have seized on the PM's absence and exploited it aggressively, natch.

The "response that is above politics" he wants is official commitment to insane emissions targets that will hand billions of dollars to already filthy rich oligarchs and do absolutely nothing to solve this problem of gobal warming -- because it doesn't fricken exist!

Dick's angle here reminds me of Tim Costello saying "climate action isn't political, it's being held hostage by politics and we need to free it". It's a typical leftie con. It's meant to trick us into believing that they have our best interests at heart, when the opposite is true.

They always use deception (alternated with intimidation) because they know they can't win the argument. So, this is a way of getting what they want (top down control over us) without actually having one.

Mr Skivvy has many fellow travellers in the MSM who help push the whole scam by constantly invoking emotions -- prolly unknowingly because they're such child-brained muppets. "That ScoMo is such a big bad meanie. So heartless!" 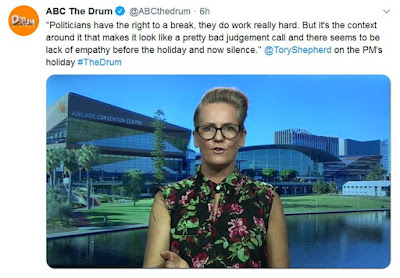 The big outlets also keep peddling more general lies about this "climate emergency", employing an old fave, false equivalence. Take this story. Obviously smoke blanketing a city of millions for weeks on end is a massive public health problem. But the smoke is the result of fires, caused in major part by arson. 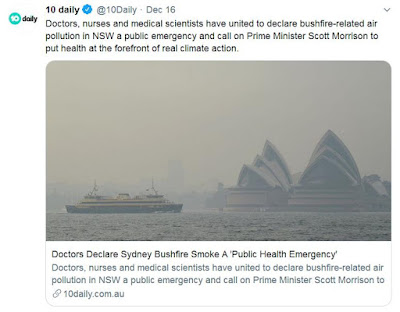 If a doctor or other medical professional believes climate change is the cause of them and that climate action (ie pretty much crippling our entire economy by shifting to piss-weak, unreliable renewables) is the solution then he's not being rational and has let his emotions take over. Shouldn't be trusted with any other diagnosis, IMHO.

The fact that so many of them dutifully promote this bollocks narrative shows the terrifying extent to which warmists have hijacked institutions -- and surely the mainstream media is the most converged of these. It's basically the globalists' propaganda arm. So when Doug Cameron tweets this it's pretty ironic.

That's because the mainstream media itself is a shallow stunt in the sense that it's fake as and not the truly independent, fearless collective of truth seeking investigative journalists it purports to be.

In any case Labor pollies have form for shallow media stunts. Hot Albo himself has been performing them in recent days.

Lefties are just sooo predictable, aren't they? FFS, they are like wind-up toys. They are always on the lookout for things to be offended and/or outraged about. And when something bad happens it's absolutely the worst thing ever; invariably the fault of the patriarchy, white males, capitalism, nationalism, etc.

Their behaviour is so simplistic and one-dimensional it's really quite alarming. I used to see them as ideologically indoctrinated, but I now think that completely brainwashed is more accurate. Their puerile shenanigans are the result of a decades long psyop by a truly evil cabal of globalist scumbags, not just an excess of wrongheaded zeal. Their minds are not their own, the poor little poppets!

Nothing illustrates this more clearly than their reaction to "man-made global warming", which any sane adult can tell is not an issue.

Of course they all fervently believe that it's the main driver of the terrible fires now raging across much of Australia. They also think that the obvious solution to this dire situation is to assemble in a pack and get really shouty. (Given how loudly they whinge even on their quiet days, this is saying something.) 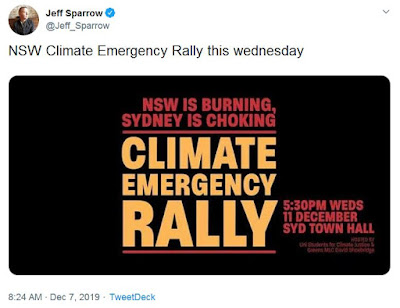 I find this fascinating. Even if they are correct with their, er, analysis, what do they think that poncing about en masse, shrieking their increasingly extreme demands will achieve? It's not like we (and the pollies we've elected) don't know what they want. FFS, it's all we ever hear via the mainstream media -- which is of course a major tool of this sinister psyop.

It's like they have no idea that people might have actually thought long and hard about these issues and come to a different conclusion, and this is why they disagree. They seem to believe that there can only be one way of looking at the world and this must be obeyed at all times and any divergence from it is verboten!

This is another reason I think that calling them mind-controlled is accurate. It's one thing to have firm beliefs, but to believe that everyone on Earth has to follow suit is not just undemocratic but robotic.

Even when they're not just zombies repeating retarded slogans they're absurdly OTT. Many are so determined to milk the fires for warmist, er, hot points it's really quite creepy. 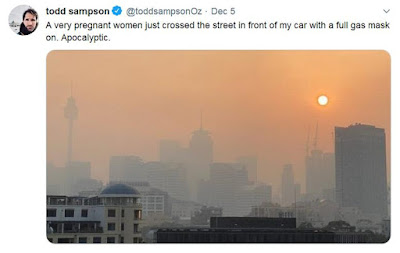 I live in Sydney. Yes, the smoke has been very thick on some days. It's obviously bad for our health. And you do see some people wearing gas masks. But it's not "apocalyptic" -- not by a long shot.

Also, what are the odds that this hipster sleb is pro-choice? Pretty high, I reckon. Yet here he invokes concern for the rights of the unborn ... You often see this from warmists who are also abortion supporters. They'll crack the sads about future generations when bloviating about climate change, but ditch that angle completely when it comes to a woman's right to choose (to have her baby offed). It's another soullessly predictable behaviour that's pretty disturbing.

Speaking of which, this dude is practically rubbing his hands with glee.

How's that for brazen opportunism? He hopes to see lawsuits against the Oz Govt for what might happen to NZ glaciers due to fires caused in major part by arsonists, and exacerbated by ground fuel build-up caused by Greens policies. Ice work if you can get it ...

Desperation to appear woke in the face of the fires can be a real creativity killer, too. This guy can actually write, but this is just pathetic.

That's the kind of puerile crap you tweet when you drink the leftist Kool-Aid, chant the warmist dogmas and pack your bong full of dried soybeans. Sad!

And bongs have to be lit, remember. Just like the fires themselves ...

Yet it's the one thing the lefties ignore because it contradicts the "climate change" narrative that they're flogging as hard as possible.

It's beyond dispute that arson has been committed unusually often this year -- and right across Australia, apparently. Why, it almost seems ... coordinated somehow.

That's why I can't help but be suspicious about the motives of these arsonists. Knowing how brainwashed lefties are, I wouldn't be surprised if some are deep green useful idiots.

Massive ongoing conflagrations really support the apocalyptic narrative, after all. And when it comes to the globalist, warmist Left, the narrative is absolutely everything.