Proof that leftism is quite literally garbage

Any sane rational adult knows that socialism is a completely discredited ideology and that the further left you go, the more insane and terrifying it becomes. So I always find it kinda weird that such a stupid worldview has such enduring appeal, and in a place that is so obviously so free, open and prosperous because it is founded on leftism's opposites.

Take my home turf of Sydney's inner west. It is an interesting experience for a rightie such as myself. It's a very left-leaning place. Of course, most of its denizens are very nice people who are not at all extreme in their politics. But there are definitely more than a few who are.

Perhaps the clearest evidence of their existence is the sheer number of far-left posters plastered all over the joint. Walk down King Street in Newtown and you'll really see what I mean.

It's not just walls and telegraph polls that are covered in the stuff. Rubbish bins cop it as well. Take this classic I spied in Enmore Rd: 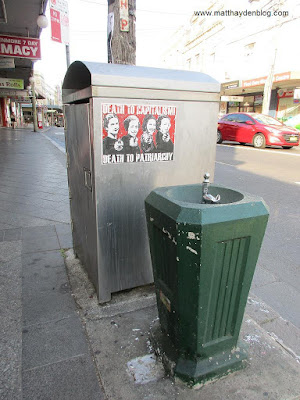 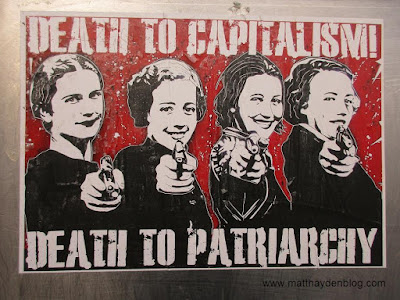 So much you could say about this; so many internal contradictions.

Firstly, the big leftie-feminist "argument" is that a world run by those 'orrible profit-driven pale males is cruel and violent. Bolshie babes, OTOH, are supposed to be so full of lerve and compassion. Yet here these chicks are, threatening to kill blokes! Now, that's not very nice is it?

And they're toting pistols. Aside from the image's appalling phallic symbolism, it's a bit inconsistent with their anti-gun philosophy, innit? (Actually, prolly not when you think about it. For the socialist Left, gun-control ultimately means the state -- which ideally they rule, top down -- packing heat, and everyone else unarmed.)

And where's the diversity? These all look very much like whitey-tighty, "cis-females" to me -- prolly all heteros too. FFS, it's an outrage! Where are the black wimmin?

Also, they're all right-handed. Not one leftie! That's a yuuuge omission when you consider the context.

Anyhoo, onto the next example of rhetorical rubbish. This one is in Parramatta Rd, Leichhardt, just near the corner of Norton St. 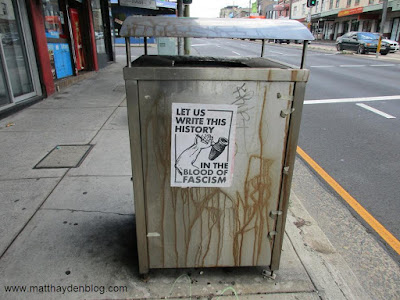 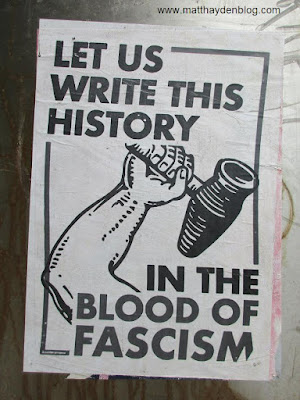 Call me old fashioned, but when I see something so brutally bloodthirsty, and in black and white, I'm instantly repelled. Immediately makes me think: what kind of twisted individuals would create something like this? And what sort of bitter losers are they trying to attract with it?

Also, who are the "fascists" the poster refers too? Clearly, the extreme rhetoric of far-left groups behind posters like this sees capitalism as a kind of fascism, and judges all those who engage in it as being complicit. So, it's basically saying: if you're not with us, you're against us. And if you're against us, we wanna club you to death.

Just as with the female firing squad above, this commie can-art suffers from a sad case of projection. Any sane adult can see that its creators are far more vicious and violent than those they condemn.

Thankfully, malignant muppets like this are a minority -- even in this very left-leaning area ... Still, they do have many fellow travellers in universities and other places where they can poison young impressionable minds with their toxic rubbish.

Wouldn't it be great if these institutions "took out the trash" from time to time?

Unfortunately, such purges would be Stalinist in their own way. So, sadly, in a free society we've gotta keep tolerating these garbage humans ...

Bummer.
Posted by MattHaydenAU at 12:37 PM