Even in my youth I was never really into fireworks. Always seemed to me that if you've seen one, you've seen 'em all! Maybe I'm wrong on this, but so be it ...

In any case, now that I'm over fifty I'm even less impressed by them. So I wasn't gonna hang around for the pyrotechnics at Sydney's New Year's Eve celebrations. Still, I lobbed in the CBD in the late arvo to have a gander at how the crowds were being corralled into the various vantage points around the ol' Coat Hanger.

It was fascinating to watch ... Obviously it was a yuuuge logistical exercize. And given the very real threat of terrorism (most likely by a supporter of Islamic State) the powers that be were not gonna take any chances at all. There were plods, barriers, and bollards fricken everywhere!

Woulda scared the crap out of any wannabe jihadis as well as making the countless spectators there feel a whole lot safer. Strategy was clearly successful, as evidenced by the fact that no one was knifed, blown to bits or flattened by a truck on the night. So, good on the Government for stepping up security in such a clear and pervasive way.

Still, aside from taking their responsibility to ensure public safety so seriously, it would be great if they could actually acknowledge the clear religious motivation behind the threat so we could have an honest, open debate about it.

Anyhoo, below are some photos I took as I wandered from the top of Bridge St down to The Rocks. 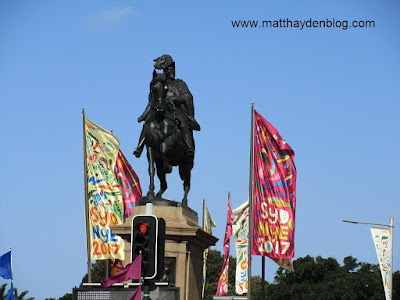 The statue of Edward the Seventh seemed symbolic of the passing of time and how the more things change, the more they stay the same. Fusty ol' dude atop his steed has been there for scores of celebrations like this one. Hopefully he'll remain for many more. 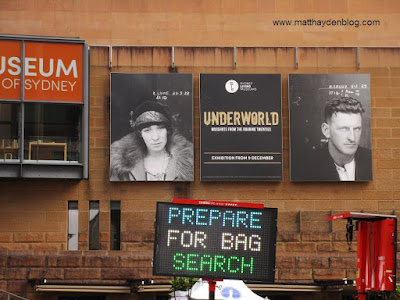 This exhibition of antiquated mug shots was a reminder of the enduring presence of criminals in our midst. Still a possibility that you'll be knifed in the street -- though nowadays that might be because you're an infidel, and not just a source of easy cash. 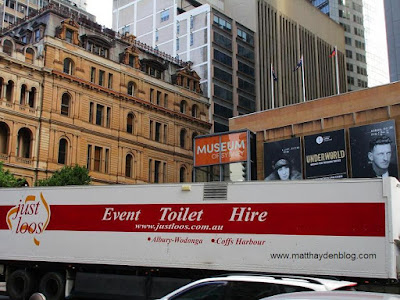 This reminded me of the sheer size of the crowds they were expecting. Note how it's actually a rural NSW company. Gawd, but there must've been a lot of poop to deal with on the night! 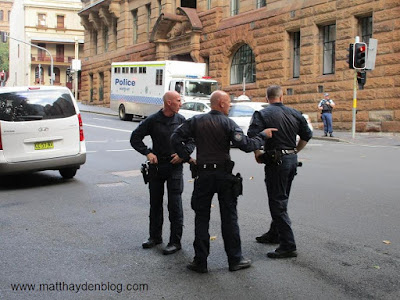 As I mentioned, the constabulary were everywhere. Most were garden variety plods. But these armed, dark-uniformed, shaven-headed heavies were clearly among the state's elite. 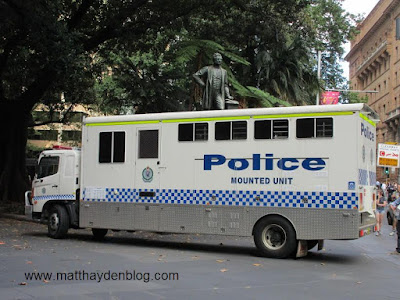 In an echo of that other dead white male Edward the Seventh up the road, the Thomas Mort statue surveyed the scene near a police van quite probably containing a horse. 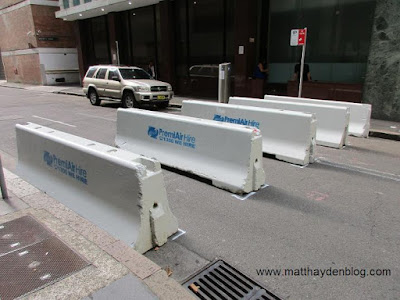 Bollards blocked every entrance to Circular Quay and surrounds. Nothing left to chance. This was just a side alley. 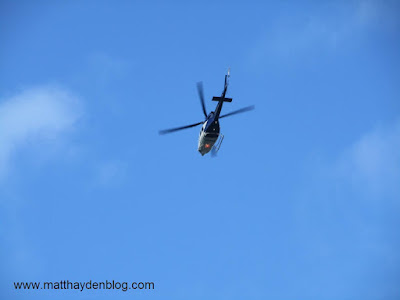 Several helicopters buzzed above. Maybe most were from the media, but some were copper choppers. 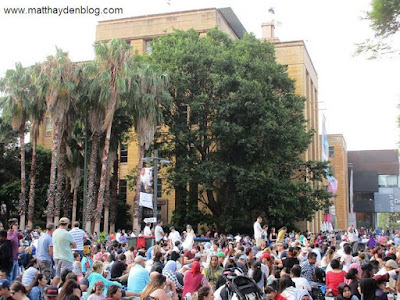 Just to give you an idea of the density of the crowd. This is just a small segment in front of the Museum of Modern Art. 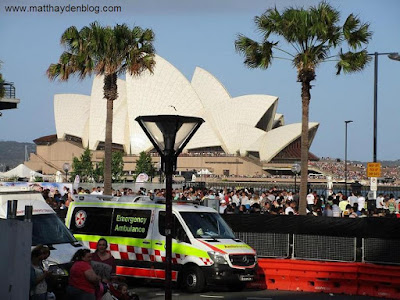 Hopefully none of these were required -- even for people suffering from accidents or health problems. (Though I suspect that wasn't the case.) 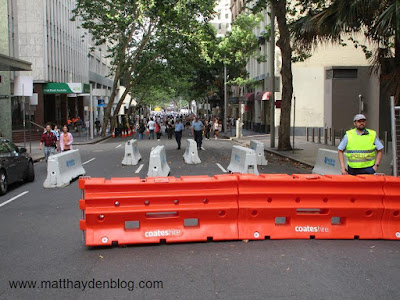 Still more barriers, bollards, and plods ... This was the view from the bottom of Bridge St looking towards Circular Quay. I got many more similar shots. But I think you get the picture.
Posted by MattHaydenAU at 1:39 PM