It's well established that lefties and liberals are intellectually dishonest. Deep down, they know they can't win on the merits of their own ideas so they are always trying to stop voters hearing competing ones. If they can, they'll simply silence their opponents -- either by outright intimidation or more subtle means such as lawfare. If they don't manage to censor them they'll do their utmost to slime them as bad people with appalling attitudes who should never be listened to. The malignant muppets are so desperate to discredit and disqualify those who disgaree with them it's fricken hilarious!

One of their fave ways of doing this is by employing false equivalence. Celebrity Muslim feminist Yassmin Abdel-Magied gave a perfect example of this recently in her silly troll-tweet mocking people justifiably pissed off about African gangs in Melbourne. 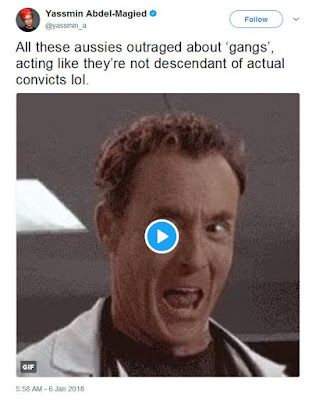 So stupid ... Apart from anything else you think: if our nation is comprised of such inferior stock why the hell did she live, study, and work here?

But it's not just stupid. There's actually a barbaric subtext to it that says a lot about the attitudes of Abdel-Magied and her fellow travellers. (And this "you're descended from convicts" line is very popular with the PC Left, BTW. I've heard it many times before.)

The tweet basically implies that Anglo Aussies have inherited criminal traits. While I won't say this makes her "literally Hitler" -- since that itself would be big time false equivalence! -- she is still invoking the idea of genetic determinism to slime a large percentage of the population. This concept has long been used by bigots to justify their prejudices.

Implying that a specific demographic group are somehow inferior because they have inherited criminal genes is akin to saying "you'll never be civilized because you're black". If she seriously wants to end discrimination against non-white people, then she should refrain from using such ugly tactics.

Also, she's clearly showing that she thinks the punishments meted out to white Aussies' convict ancestors were actually valid. Hell, if that's not the case then why invoke them as a way to sledge their descendants?

She seems to believe that sending someone halfway across the world in a fricken boat, never to see their homeland again, is a reasonable punishment for stealing a loaf of bread. Talk about regressive!

Makes you wonder what other ideas she has about law and order ...

Yassmin's tweeting of such toxic tosh is obviously alarming. But remember she was long one of the ABC's darlings! That's even more of a worry.
Posted by MattHaydenAU at 12:46 PM