Never mind the bollards ... it's just Christmas in Sydney

Fascinating to watch the reaction of Western governments and the mainstream media to the problem of Islamist terrorism. Just sooo reluctant to grasp the nettle, eh?

They know the threat is very real because people keep getting killed and maimed by these gruesome goons. So they have to do something.

But they're squeamish about actually identifying the problem. Doing so would mean ditching some of the main foundations upon which their politically correct Empire of Bollocks is built. There's no way they wanna even start going down that road ...

So they keep trying to fool the public with stupid posturing and pronouncements, or tragically hare-brained "preventative" schemes. But aside from a buncha basket-weaving, sandal-wearing inner-city Greens voters, they're only fooling themselves.

This response to the recent Melbourne terror attack from the geniuses at The Conversation says it all. 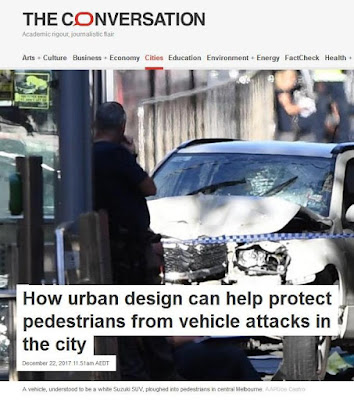 Obviously the powers that be here in Sydney have been “thinking” along the same right-on lines because anti-terror barriers have been in place at central locations like the Sydney Opera House and the eastern end of Martin Place for a while now.

And more “diversity bollards” have been popping up lately. Take these giant stone baubles at Martin Place's western end, near the corner of Pitt St. 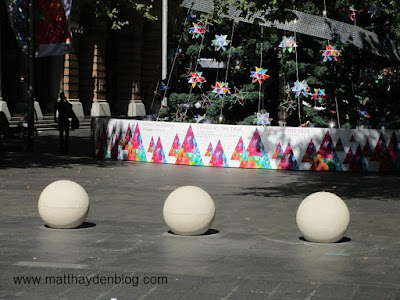 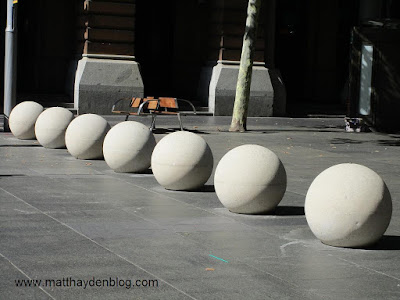 Now I'm not sure if they were installed specifically due to the increased triggering potential of the giant Christmas tree erected adjacent to the GPO. But it certainly seems like it … Pretty sure they are a recent addition. In any case they look like being a permanent fixture.

Then there are the ones in the newly opened section of George St down toward the QVB.

Love how they're all wrapped up like Chrissie presents! Fact that they are shows that whoever put them there is afflicted by two levels of idiotic delusion.

One: that these lumps of concrete will truly make us safer from murderous morons out to eradicate as much infidel “Aussie scum” as possible.

Two: that the Yuletide decorations will make them seem less obvious to passersby. 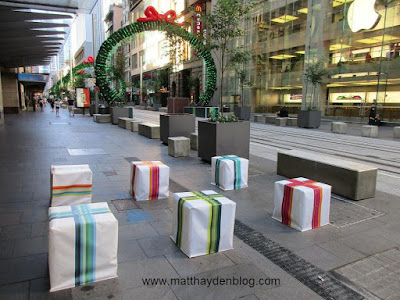 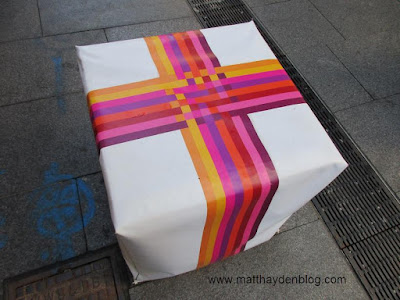 Gawd. What a crap gift! Worse than finding a Peter FitzSimons tome in your stocking, it is ...

Instead of offering square lumps of concrete to Sydneysiders justifiably concerned about the real possibility that they'll be run over, knifed or shot by some insane, retarded Islamist arsehole shrieking "Allahu Akbar!", both the Government and mainstream media should start by acknowledging the, er, Caliphant in the room, and allowing free, unrestrained debate about how best to actually deal with this massive problem.

That would be the best Chrissie present we've all had in ages, I reckon.
Posted by MattHaydenAU at 12:02 PM