Van Badham tells men to "stand up and fight" Milo Yiannopoulos. What a joke!

So funny to watch Milo Yiannopoulos trigger the local MSM snowflakes as he tours Australia. They're trying so dang hard to push this bogus line about him being a neo-Nazi racist. They all just repeat the same fake news talking points like the fricken zombies they are.

They always highlight the Twitter ban, natch. Vanessa "Van" Badham says he was punted "for encouraging the sexist and racist abuse of Ghostbusters actor Leslie Jones".

Such bollocks. He didn't sic his followers onto her at all. He mocked her in tweets, then some tweeps piled on afterwards with really vile stuff and the liberal media blamed him for that.

When you have hundreds of thousands of followers some of them are gonna be utter arseholes, let's face it. What they do is not your responsibility. But this reverse association trick is a fave leftist tactic. It's like saying that because a sleb has a stalker who commits a crime, the sleb is to blame. Nasty, dishonest stuff.

Sure, Milo trolled Jones big time and mocked her appearance. And he referred to her race in a self-mocking tweet about his own obsession with black dudes. But to call this racist is a helluva long bow to draw, especially since there are countless truly racist tweets -- along with all the other putrid stuff -- still up on the platform unchecked (some of it even from slebs who are!).

The Aussie love media luvvies all repeatedly call him "alt-right" which is now a term that's used to describe neo-Nazi white supremacists like the goons who read Daily Stormer. Our socialist snowflakes are thrashing the hell out of it! But Milo is not like that at all as he explains comprehensively in his best-selling book Dangerous.

Yiannopoulos abhors political correctness, of course. But to say this means he believes in a master race is BS on stilts.

But intellectual dishonesty is the essence of the PC Left, innit? And they're using it in a concerted effort to rile up their credulous acolytes then blame him for creating a "dangerous" environment. Then they can no-platform him -- to keep Australians safe, natch. What devious scumbags they are. 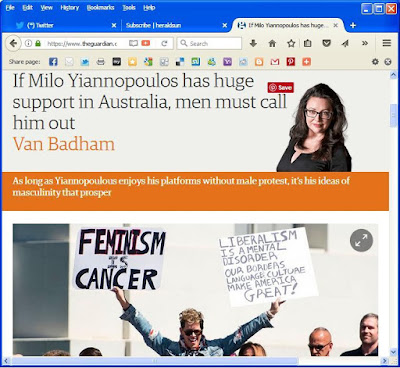 All the local leftie luminaries are packin' death over Milo, since he so fabulously flays their precious PC narrative -- to which they all owe their massively overpaid gigs (funded with money snatched from the very normies they spend their miserable lives sneering at for "wrongthink", BTW).

Vanessa "Van" Badham is more terrified of him than most, which has made her Guardian gargle from last week exceptionally silly. She kicks own goals throughout:

Yiannopoulos’s apologists insist that he can’t possibly be homophobic, racist or antisemitic because he claims some Jewish heritage and is married to a black man.

Actually it's not just these reasons. There's also his many articles and videos, in which he consistently and articulately condemns bigotry of all kinds and exhorts his readers and viewers to apply one standard, one standard for all. But Vanessa, who's always holding her leftie and frightbat pals to a far lower standard than others, simply can't comprehend that.

Well d'uh! Of course married men can be misogynists -- as can self-described "male feminists". Given the tsunami of revolting revelations about such right-on dudes in America's liberal media and entertainment industries, it looks very much like that's the norm rather than the exception.

Women, too, can be women haters. Just look at the abuse Badham herself and her bolshie bestie Clementine Ford have hurled at chicks who don't toe their stupid victim feminist line. Misogynist indeed.

Then there's her obvious misandry. Badham, along with countless other crybullies, has built her career carping about "the patriarchy" -- just another way of saying "it's all men's fault!".

Then she has the jaw-dropping gall to imply that all her niggardly nagging is really a fricken favour to the blokes. FFS!

How very cancerous of us to insist on a common morality in which disadvantage is righted, difference accommodated and gender stereotypes dissolved.

That's hilarious. Victim feminists like her don't want common morality. They want to be given everything on a platter on account of their gender; never to be held to account for anything. And can you think of anyone who stereotypes men as oppressors (and women as the oppressed) more than blowhards like Badham?

Gawd. So feminism has liberated men? Hardly. (Hasn't oppressed them either, BTW. Just annoyed the crap out of them.)

Well, I could never accuse Badham herself of repressing her feelings. Just a shame she possesses such a limited range -- one of which is clearly smug superiority ... Her sense of entitlement is just off the charts. She actually has the gall to demand blokes get bolshie at Milo's events:

It’s for this reason I’d like to see men protesting Yiannopoulos’s visit, especially those so vocal in their “wokeness”, so articulate in their feminist solidarity, so keen to insist they are our allies ... As long as Yiannopoulous enjoys his platforms without active male protest, it’s his own warped ideas of what it means to be a man that are entering the public arena unchecked.

So she basically wants her tragic fanbois to kick up a massive stink at his shows. If it's big enough for them to be cancelled, I suspect she'll be pleased as punch. Blech! What an ugly totalitarian attitude she has.

May I remind you that Yiannopoulos has lost a book contract, two jobs and a prominent speaking role and yet is still very much breathing.

She says it like it's a bad thing ... And isn't that an intriguing choice of words? If a righty wrote that about Badham herself or one of her fellow travellers, there'd be a conga line of frightbats calling it a dog whistling incitement to violence for sure!

He claims Australia is his biggest fanbase outside the US. I’d love to know how many more Yiannopoulos may win over, before those men made of better values allow themselves to stand up and fight back.

Another intriguing choice of words. She seems not to mean this figuratively, as in "rhetorical combat". After all, she doesn't want them to argue against Milo. She just wants him no-platformed (silenced).

So, it seems she might actually believe "male violence" is acceptable after all -- as long as she's calling the shots, of course.

In any case, it sounds like her woke-bloke army hasn't exactly risen to the challenge so far. I suppose standing up and fighting is all a bit too difficult -- especially when you're so used to peeing sitting down.
Posted by MattHaydenAU at 11:14 AM