If anything, John Alexander's joke mocked dishonesty more than disability

Disappointed that John Alexander apologized for that joke he made about being eligible for a disabled parking sticker. The SJWS who piled on with the faux outrage over it will take that as an admission of guilt and bash him with it in future, as well as go in harder with their verballing of his jokes and statements. They are cowards and bullies who simply don't know what to do if you stand up to them.

So the Member for Bennelong should have just said "get a life" or words to that effect. Of course doing so would've provoked an even greater explosion of outrage initially, but in the long run he'd benefit. The usual suspects would realize he can't be bullied.

Of course, being triggered by gags is nothing new. You can find absolutely any joke offensive if you want to. And, sure, ultimately everyone has the right to have that reaction. But it's pretty clear if something is massively OTT or not. And that certainly was the case here.

Any sane, rational adult would realize that he wasn't making fun of the disabled. He was mocking politics, and how it makes you compromise your principles. 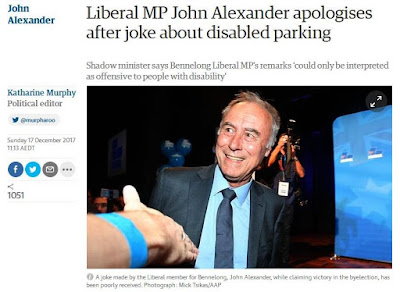 Much of the "reporting" of Alexander's quip removed context in an effort to make it seem mean spirited. Take the Guardian:

"The doctor at the time said you have eligibility for a disabled sticker. I said, I still have some pride,” Alexander told supporters at his victory function on Saturday night.

He then quipped: “That was before I entered politics.”

That short extract, and the deceptive headline, is meant to make you focus on the lead up. But check out the other stuff he said:

"When I thought my tennis career was finished, because I hurt my back, I started coaching there at one point, and then the back got better," he said.

"I was actually eligible for the disabled sticker on my car! And then I got to about number 14 in the world.

"The doctor at the time said, 'You have eligibility for a disabled sticker'. I said 'I still have some pride'.

"That was before I entered politics! I digress."

That makes it clearer what he was getting at. He was implying that he didn't really need the sticker, though technically he qualified. To have used it under those circumstances would have been dishonest.

It would have been like being eligible for the dole when you've actually got a job. Now, would saying that you're too proud to accept government payments under false pretences be mocking the unemployed? Obviously not.

So he wasn't mocking the disabled. (Actually, you could even see it as a form of respect for them. He didn't want to take something from someone who was genuinely in need of it.)

So, the joke's lead up was about his pride in his honesty and how thought he could keep living by it. But that all changed when he entered politics. Boom, boom!

In other words: To succeed in Canberra, you basically have to have no pride (and be dishonest).

“In his victory speech last night, Liberal John Alexander made remarks that could only be interpreted as offensive to people with disability."

Well, actually, there are many interpretations. I think the one I've listed above is very close to what Alexander actually intended.

For shamelessly opportunistic Labor pollies like Brown, almost any joke by a political opponent will be interpreted as offensive because they lack rational arguments, so will happily use verballing instead.

"To suggest that Australians who require a disability parking permit have anything to be ashamed of is repugnant. It’s not funny – it’s stupid and offensive."

As I explained above, the shame Alexander alluded to was not in having a disability parking permit if you are genuinely disabled, but in dishonestly acquiring one.

Brown is conflating shame with disability far more directly and strongly than Alexander did. Which is why I think she's being dishonest. (Actually, looks to me like the kind of dishonesty JA himself was mocking in his joke ... Funny, that.)

Needless to say, it wasn't just fake news peddlers and brazen pollies milking JA's joke for faux outrage. Check out this sanctimonious reaction from a troll to my tweet about this non-story that was all over the love media: 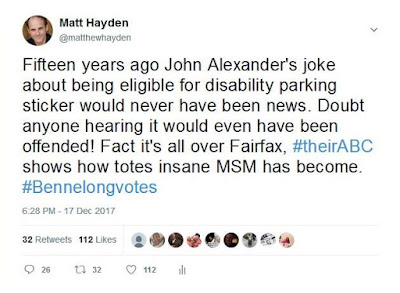 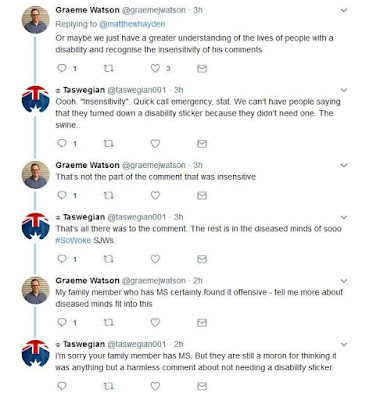 Typical emotive tactics from a PC plonker. Firstly, he goes straight to ad hom and says that JA and anyone defending him is "insensitive" (ie, a bad person).

Later on in a vile attempt to slime another tweep (Taswegian) he associates the idea of a diseased mind with his own family member with MS! Fact that he does this unprompted says sooo much more about Watson's own character than Taswegian's.

Ugh. What utter scumbags these people are.
Posted by MattHaydenAU at 2:26 PM