Sure I'm not alone in finding these Climate Strikes deeply sinister. The idea that they have sprung up organically and are being organized by kids across the globe is total bollocks. These events have been going on for a while now and have been extremely well planned and orchestrated by adults, the majority of whom don't really believe all the catastrophic talk. They're doing this to brainwash the next generation into not only accepting top-down, global government, but actually demanding it.

The brazen lies told by supporters of the latest Climate Strike were just jaw-dropping. One of the biggest was that warmism was above politics. Take this howler from Tim Costello, who clearly has a "world vision" in more ways than one. 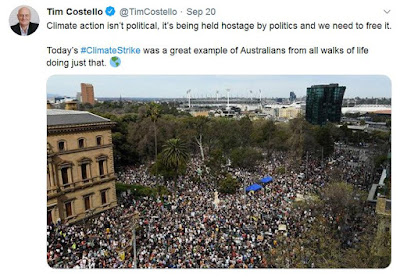 "Climate action isn't political." FFS, can you believe anyone would say something so brazenly dishonest, with a straight face.

Like all totalitarians, these globalist control freaks claim they desire the opposite of what they're really aiming for. He says he wants to "free" climate action. But what is climate action? Ultimately it is demanding that all aspects of humans' energy use are monitored and controlled centrally. How else can "saving the planet" (from their entirely fictional threat) finally be achieved? If that's not a political goal I don't know what is.

And you can tell he's utterly full of it from the quote in this vomitous suck piece he retweeted. 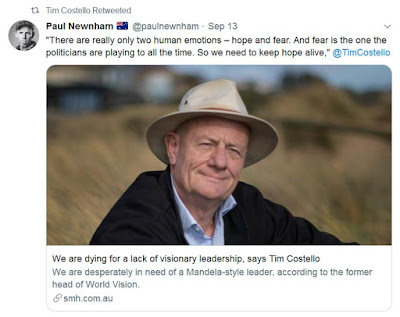 If Costello the Lesser wants to "keep hope alive" then why the hell is he terrifying kids with all this talk of climate catastrophe?

It's not even true that fear is the emotion politicians are playing to all the time. Take Trump himself. He's actually extremely positive, and is inspiring many people in the USA and globally with his MAGA rhetoric. It's miserable, meddling, highly political finger waggers like Tim who are utilizing fear -- and in the most loathsome way.

Also, very strange for a religious man ... Shouldn't he be exhorting kids to trust in God and pray?

And if you think I'm being OTT when I say that global government is the ultimate goal of these clowns, there's plenty of indirect evidence that this is the case. And sometimes they just come right out and say it, pretty much. 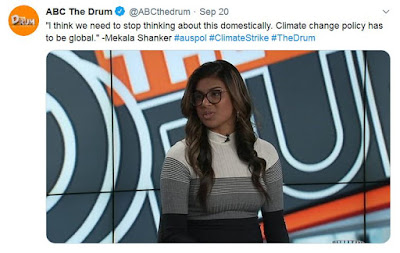 How can you enact a global climate change policy without a global government?

And take this revealing quote from Bob Brown, who clearly still dreams of being Captain Planet, representing Earthians to the cosmos. 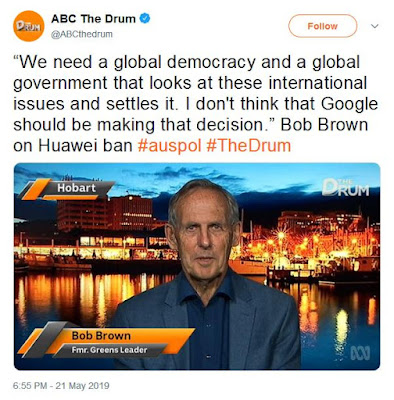 Sure, he's talking about tech issues here. But he still explicitly uses the term "global government". Deep green dreamers like Bob desperately want to be at the apex of a top down, centralized, international system where they get to tell everyone what to think, feel, say, eat and do. But they can't be honest about it and actually admit that this is what they want. They know that the vast majority will tell 'em to garn get farked!

So instead they use deceit, alternating it with intimidation. They think they can slowly but surely take the masses to where they want them to go without them noticing. It's the "boiling frog" approach.

There are many aspects to this sinister long term plan, but the AGW lie is an absolutely crucial element. That's why they just cannot let it die, and are currently cynically exploiting kids in such a desperate, despicable way.

AGW is the perfect excuse to enact totalitarian laws in all countries because every single person on Earth uses energy and has a carbon footprint. Absolutely everyone has to get with the same program or it all falls apart and the planet is doomed! It's very powerful leverage if you can convince the normies that this is what's actually happening.

For this purpose, the only other fictional threat that beats it is alien invasion. And I wouldn't be surprised if they try to fake that one as as well! Heaps of stories about UFOs in the MSM lately, after all ...
Posted by MattHaydenAU at 11:58 AM