We all know what utter bollocks predictions of global catastrophe due to climate change actually are. Warmism is a kind of religion, and a scam. But it's something else as well: a crucial part of the globalist New World Order agenda to destroy Western Civilization and control all human activity top down and centrally.

But its proponents can't just come out and say this, now can they? We'd all tell them to take a flying fark at a rolling donut, right? No, they have to con the normies into willingly accepting this tyranny. So they use puppets like Greta Thunberg instead.

The narrative that's promoted throughout the mainstream media is that she's an exceptional young climate crusader who's risen to prominence organically. She's being listened to because she's got something powerful to say!

But really the poor kid is being horribly manipulated and exploited by unscrupulous adults. Anyone with half a brain can see that.

Sadly, Anne Summers isn't in that category. She, like so many daft, credulous PC lefties have bought the whole fake narrative around Thunberg hook, line and sinker. Recently she tweeted this: 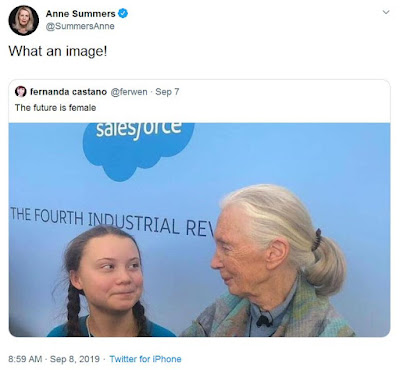 Talk about self-parody. The future is female? The present is insane, more like ...

The actual photo is from this year's Davos meeting of globalist movers and shakers. The World Economic Forum is where the filthy rich, controlling creeps get together and work out their next sinister psyop.

It's all there in the shot. It was a Salesforce event. The two icons above were being sold, and forcefully, as part of "the fourth industrial revolution".

FFS, could they have made it any more obvious? The carefully crafted public images of Thunberg and Goodall were just being used to con the masses into going along with a massive change in the global economy involving the shift to renewables and many other deep green initiatives.

Of course this top down "revolution" won't actually work like they say it will. If the sinister cabalists get their way, the Western world will collapse economically as well as culturally and socially. But that's really the whole point in the long run. 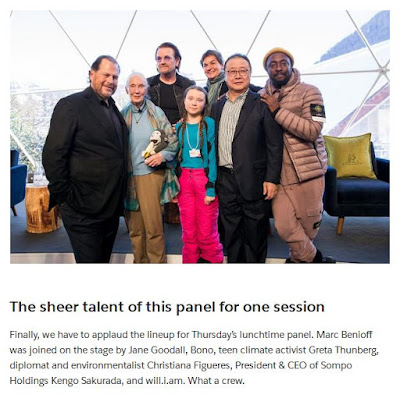 That is such a creepy shot, innit? There's child-brained Goodall with a stupid chimp doll, as well as Thunberg and even Bono -- one of the world's biggest warmist wankers for sure.

Speaking of "revolutions", here's a related example of the same creepy agenda at work. Got this shot at Newtown Station last year: 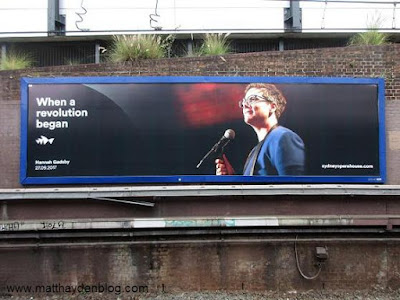 Like Thunberg, Hannah Gadsby was promoted as some kind of brave paradigm buster who got to her level of prominence on her own steam and raw talent. Absolute bollocks. She was carefully selected by TPTB in the globalist media and entertainment complex because she was female, lesbian and about as funny as a dumpster fire in an orphanage.

To place her at the absolute peak of the entertainment pyramid was a way of subverting the "heteronormative patriarchy" as well as the meaning of comedy itself. Her manufactured ascent was clearly part of the cultural Marxist agenda. Totally trashing whatever these loathsome, malignant creeps infiltrate is always their ultimate goal. FFS, look at what they did to other art forms like painting and sculpture.

While Gadsby's gender and sexual identity were obviously key ingredients, I think her excruciating joke-phobia was the clincher. A young Magda Szubanski wouldn't have been given the same push. She was actually a hoot. Can't have that. Not subversive enough.

And in a similar, though more subtle and gradual way, Jane Goodall's rise to prominence was also manufactured. She even seems to have suspected this herself:

When I look back over my life it's almost as if there was a plan laid out for me - from the little girl who was so passionate about animals who longed to go to Africa and whose family couldn't afford to put her through college. Everyone laughed at my dreams. I was supposed to be a secretary in Bournemouth.

Well, yes, there was a plan laid out for her. Powerful people with a hidden agenda used her to put the plight of the environment centre stage in people's minds. Having a pretty young woman whose BFFs were adorable chimpanzees was a brilliant way to push the deep green agenda.

Raising awareness about these issues was not all bad, of course. But as the two quotes below attest, she was also being used to pre-emptively program the normies for the animal rights agenda, which is clearly going into high gear now.

Chimpanzees, gorillas, orangutans have been living for hundreds of thousands of years in their forest,living fantastic lives, never overpopulating, never destroying the forest. I would say that they have been in a way more successful than us as far as being in harmony with the environment.

We are beginning to learn that each animal has a life and a place and a role in this world. If we place compassion and care in the middle of all our dealings with the animal world and honor and respect their lives, our attitudes will change.

When you've lifted the rights of animals lowering the rights of humans is a doddle. And being able to do that is clearly a crucial element if you have plans to enslave the entire world's population in a totalitarian neo-feudal system (NWO).

Yet the most zealous advocates of animal rights are completely unaware of this wider goal. In this, they resemble abortion zealots.

On that subject, isn't it interesting how animal rights activists are also pro-choice. They think the lives of chickens in cages are more valuable than those of human foetuses. Weird, innit?

And notice how ghoulishly extreme the pro-choice push has become of late -- not just in the USA, but here in Oz as well. Pro-infanticide would be a more accurate label.

These poor, sad people have been utterly brainwashed. Yet many of them including Anne Summers herself are extremely well known, well established and widely admired. And like Thunberg, Goodall and Gadsby, their successes were anything but organic.

"We, the Rockefeller Foundation, supported and funded the Women’s Liberation Movement. Why do you think we did it? There were two primary reasons for this: One was that before women’s right to work, we could only tax HALF of the population. The other was so that with women going out to work it would break up families. Women would have to spend all day at work away from the family. The children would begin to see the state and teachers as their family and this would make it easier to indoctrinate and control them." ~ Nick Rockefeller to Aaron Russo

So ironic that these feminists think of themselves as leftist revolutionaries who are taking down a sexist patriarchal system. It's more accurate to say they were the clueless dupes of the toppest end of town there is: a buncha super-rich capitalists hell-bent on world domination -- and most of them white dudes to boot!
Thanks for reading, and if you've enjoyed this piece, please consider supporting me via Ko-fi.

Posted by MattHaydenAU at 2:34 PM