Recently ScoMo observed that a sign on the dunnies at Parliament House was overly PC. Not surprisingly, this triggered woke folk across Oz into a frenzied fit of shrieking, wailing and gnashing of teeth.

Always on the lookout for any excuse to push her dreary victim feminist narrative, Virginia Haussegger offered the petty, silly thought bubble included below. (BTW, Ginny is another one of those ABC types who call themselves "journalists" in their profiles. But activists is a much better description. If you check out her tweet stream, you'll see it's just an endless whinge about "the patriarchy" and how it can be "deconstructed" using quotas, etc.) 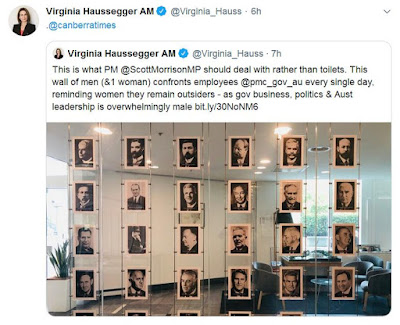 Can you believe that an adult professional (and a high profile one at that) would make such a puerile observation?

FFS. It's Parliament House. It's where the prime ministers worked. What else are you gonna put up there, a montage of all the feminist chicks who never got the gig because of "institutional misogyny" or something?

Gawd. I's a record of reality, of historical fact. Like it or not, that's what happened.

Clearly, the snowflake sister can't handle reality, so she wants the Dept of the PM and Cabinet to renovate their office so that her delicate feelings are protected. Talk about about a sense of entitlement! She really oughta check her privilege.

As well as being undeniably daft, there's something a tad creepy about her wish. It's similar to the push to tear down statues of Captain Cook and other "dead white males". Cultural Marxists reckon that if they just erase and then rewrite history, they can create utopia. That's not just absurd. It's totalitarian.

Also, she hasn't quite caught up with her own side's rapidly mutating views regarding these identity issues. When looking at all those photos of the nation's leaders, didn't she assume their gender?

I mean, how do we know for sure that Alfred Deakin viewed himself as a man? Could he not have privately thought of himself as "Alfreda"? And what was the true gender identity that lay hidden behind the "John" Curtin?

Also, why would it necessarily be soul destroying for chicks to look at all these "pale stale males". Couldn't it also be a kind of inspiration for many?

Don't boxers, sprinters and other elite sportsmen (and women!) often train in front of photos of their main rivals to remind themselves of their goal of knocking them off their pedestals? Steve Jobs once famously said "stay hungry", remember ... Oh, that's right, can't quote him 'cause he's a dude!

Speaking of which, there are millions of them who aren't included in that display because they never got to be Prime Minister. Technically, that makes them "outsiders" as well. Should they be offended too?

And it should not be forgotten that there is one chick included in the display. Julia Gillard finally got a guernsey after smashing her head through the "glass ceiling", thereby doing the "shard yards". Focusing entirely on the profusion of blokes on the team surely trivializes this paradigm busting achievement, dunnit?

But that's today's feminism for ya! Rather than celebrating achievement against the odds it's more about plucking defeat from the jaws of victory, and calling that empowerment. Sad!
Posted by MattHaydenAU at 2:25 PM