The spectacle of PC lefties all getting stuck into Alan Jones over his sock comments was funny and creepy at the same time. As is always the case with controversies like this the outrage was not organic. It was clearly orchestrated for maximum effect. Hand-wringing, finger-pointing scolds in both mainstream and social media got together in an all out attempt to get him punted.

The fact that they would choose this faux pas -- trivial to any sane adult -- shows just how desperate they are. They really have got nothing else ... Sad!

He seems to have weathered the storm which is heartening. Still, he did apologize for his comments and I think that was a tactical error. People attacked by the thought police do this in the hope they'll be appeased and back off. But they never do that. They just take your apology as an admission of guilt and use it as "proof" that their claims are valid and repeat their demands.

The argument that AJ saying ScoMo should "shove a sock down Jacinda Ardern's throat" normalizes violence against women is just idiotic. That's like saying the oft-used phrase "eat shit and die" encourages suicide.

There are so many phrases like this that are in common usage. They are not gender specific and if AJ must never use them again then surely the rest of the population should be held to the same standard. The woke folk aren't saying that, of course, showing that this was all about targeting Jones and nothing else.

Needless to say women -- many of them feminists -- use insults like this against other women. Leftist men do too. Look at the hatred expressed towards conservative women and you'll find plenty of this kind of imagery, especially on Twitter.

Just off the top of my head there was the case of Adam Hills imagining Pauline Hanson being hung from the Sydney Harbour Bridge. Of course there was no leftist outrage about that.

But some tweeps took the faux indignation even further than the bulk of the leftist trollective. They didn't just claim that Jones normalized violence against women but that he dinkum revealed his murderous intent! 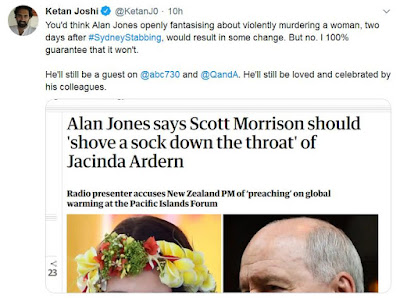 Interesting that Ketan was so outraged about the sock phrase, and linked it to the Sydney stabbing. If his tweet stream is any indication, he seems to have been more upset by the broadcaster's colourful language than the gruesome murder itself.

And even on the day of that horrific event he was most upset by the fact that a journalist had actually done some accurate reporting by mentioning that the killer had yelled "Allahu Akbar". Ketan thought it was irresponsible to do so. 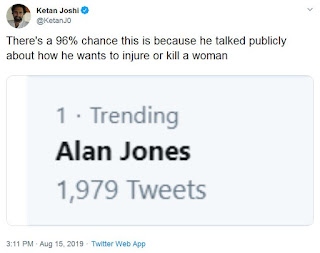 Well I would say yes and no. IMO these muppets blurt ridiculous stuff like this because they don't really believe in anything -- except power, of course. So they'll say absolutely anything no matter how absurd with total sincerity if it furthers the cause of silencing, or at least demonizing their opponents. Technically they're not really lying because they don't think the truth actually exists.

Imagine being that lost ... Gawd. 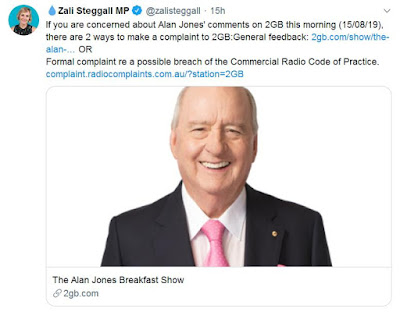 As well as all the activists masquerading as journos, shallow and opportunistic pollies joined the pack attack. Vacuous tool of global warming scammers Zali obviously hates AJ's guts because he does a good job of exposing the gigantic fraud she's committed too. Deep down she must know the whole thing is a massive crock and hates to be reminded of this, which is why she exhorted her dopey acolytes to lodge an official complaint against him.

Obviously most of the outrage expressed through these channels is confected. Many of those submitting complaints only do so because they're told to by their "thought leaders".

Then there was the corporate virtue signalling by the Koala mattress company.

Turns out that they had actually stopped their advertising on his show several weeks ago. So they were being deceptive as well as pompously sanctimonious with that tweet. Just tried to exploit the ruckus to get some more brand awareness. Cynical as.

And I think it might have been a bad move long term. People are getting really sick of this right-on virtue signalling, as the Gillette saga has shown. "Get woke, go broke" as the saying goes.

Posted by MattHaydenAU at 2:07 PM