Everyone wants to be Bob

One of the saddest aspects of PC leftist psychology is just how empty these poor control freaks are inside. They simply don't know who they are unless they're bossing people around. Getting that hit of subordination is like crack cocaine to them. Without it these collective narcissists are nothing.

Given that their every waking hour is spent pursuing their next hit of emotional fuel they have never actually developed an inner life. Lacking a true character, they are always faking one.

That's what virtue signalling is all about. It's a grotesque display of faux concern that's meant to dupe the gullible into admiring them and ultimately doing what they demand.

Another, more specific example of their pathetic, desperate fraudulence was Adam Bandt echoing Bob Hawke's famous phrase after we won the America's Cup. 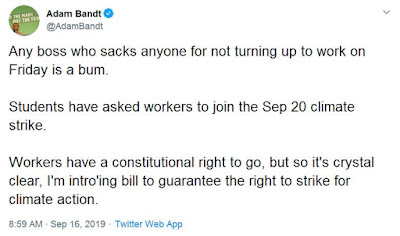 Gawd. How cringeworthy was that? Hawke was the antithesis of Bandt in so many ways. Talk about chalk and (vegan) cheese.

Even though he was on the socialist side Hawke was definitely waaay more patriotic than Bandt. He was also heaps blokier than the prissy, simpering male feminist.

But little Adam wasn't the only leftie invoking Bob's memory. Bill Shorten did too, remember.

The puppet of union thugs, he clearly believes in nothing. He just sought the glory of the position of PM and the coercive power it affords.

Fortunately the voters figured that out nearing election day back in May. Panicking, his spin doctors had him doing cringeworthy stunts like jogging heaps and cuddling puppies with some dumb blonde to make him seem more dynamic and affable.

And given the much loved former PM's almost suspiciously timed passing Shorten tried to milk his memory for votes ... Sure you've all seen this nauseating photo of three vultures and a dead Hawke. 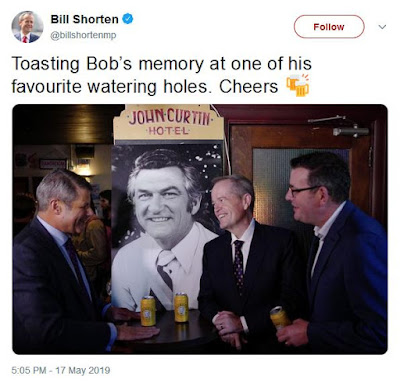 Bob had just popped his clogs a day or two before. If these dudes loved and admired him as much as they claimed to they would've been quietly, solemnly grieving, not knocking back cold ones with big smiles on their fugly mugs to try and show what top blokes they were. Hell, it prolly wasn't even actual beer in those cans but soy milk instead!

Dunno what's more disgusting -- the photo itself or the cynical, parasitic bozos thinking it would con the normies into voting for Labor ... I think it made a lot of people wanna puke, TBH. Certainly wasn't a net positive.

On a related note, lefties tried to invoke a more general Aussie bloke archetype in the wake of the Sydney stabbing. Just as with the examples above, it rang hollow.

Posted by MattHaydenAU at 2:38 PM