The claim that Alexander Downer dinkum engaged in "spying" sounds utterly absurd because the word evokes a dangerous world of high stakes intrigue -- James Bond, Cold War, Jason Bourne, etc. But if you remember he's just a dude tryna keep in the good books with powerful forces (like an office worker in a big company might) then what Papadopoulos accuses him of sounds much more plausible.

There's also heaps of other stuff that's been going on the last coupla years that you'd only know about if you went "off the beaten track" into the wilds of "alt-media". This stuff makes Downer as spook seem a lot less far-fetched, I can tell you!

As is the case with so many issues -- climate change, for example -- the MSM  have their heads whopped right up their own clackers. In fact, they're so far up 'em, they're coming out their own mouths! Which is why they talk crap all the time. And they're definitely talking crap on this so-called "conspiracy theory".

Because Guardian "journalists" here are lazy, brainwashed muppets, they've just looked at this Papadopoulos stuff and thought: "Oh, we all know Lexie's a Tory, and he's for Brexit, etc, so there's no way he could possibly be part of a plot to take down right-wing nationalist Trump." So they come up with articles like this. 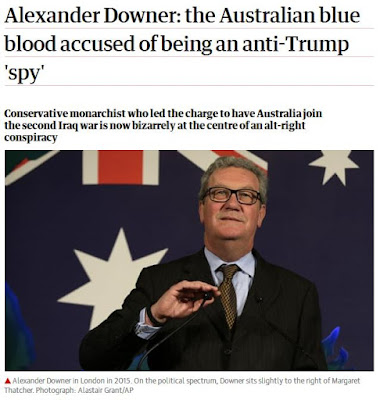 ABC robodolts like Matthew Bevan have been repeating this "Downer a spy? LOL!" angle ad nauseam also, often linking it to Trump. Pretty funny when you consider that this muppet (along with the entire MSM) has been a sucker for the biggest conspiracy theory of all (the one about Russian collusion) for years on end and now he's hinting at dark forces ("Trump's favourite TV host") behind this narrative. FFS, who's the wingnut here? 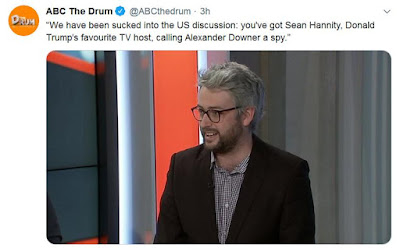 Being a mere activist he hasn't looked closely into why we've been sucked into the US discussion, just offers facile observations about it. A real journalist, OTOH, would actually do some research into the details of Papadopoulos' claims, and their context. But nup. Smug insinuation will do when you're a guest on that combination sneerfest and circle-jerk called The Drum.

In any case, the whole PapaD vs Lexie grudge match has been highly entertaining. 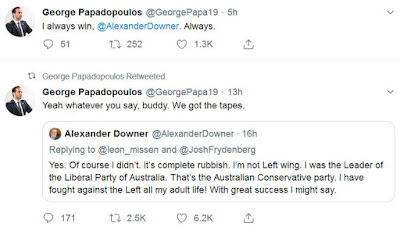 Notice how Lexie himself cites his Tory credentials, zif that's some kinda rhetorical slam dunk. But as Stefan Molyneux would say, that's not an argument! 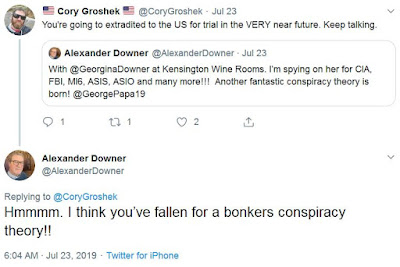 But what if it's not a theory, and people did conspire? And they used him to further their ends? He's not offering anything like a solid refutation, or even any evidence, to debunk this claim. He's just using a hackneyed term that's meant to smear his accuser as a paranoid idiot. 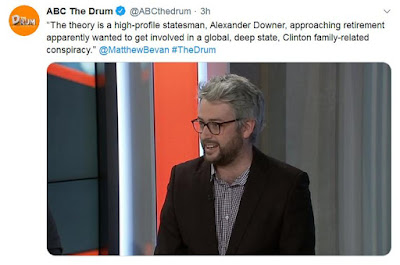 It's a very lazy, tried and true tactic, which is why Bevan has employed it here also.

And what did Bevan's investigations entail? Why, an interview with Lexie himself! 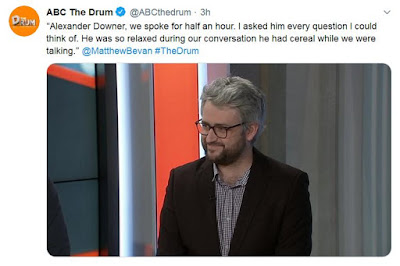 Firstly, it's lazy to draw your conclusions merely from asking the accused about the accusation ... If, say, a teller says his boss has been ripping off the bank do you just go up to the manager and say "Mate, did you do it?" and take his answer -- an obvious "no" -- as the final word on the matter, or do you look forensically at the money trail?

Also "every question" you could think of is not gonna reveal much when you're a robodolt whose main software program is OrangeManBad.exe.

And so fricken what if the chowing Downer was so calm that he snacked as he yacked? How much of a child-brained credulous twit would you have to be to conclude that that somehow supports the line that the claims are bogus?

Posted by MattHaydenAU at 7:14 PM