I'm all for press freedom and I firmly believe in the public's right to know. But this massive, coordinated campaign by pretty much every mainstream media outlet in Oz has my spidey senses going right off!

It's so highly coordinated, and conformist in its expression it's alarming. It looks like they all got a memo from MEAA or something ...

Fact that Labor are joining them in solidarity is just laughable. This is the same party that, under Julia Gillard, put extreme pressure on News Ltd, resulting in Glenn Milne getting his career nuked. Broadcaster Michael Smith was also permanently punted because he was practising real investigative journalism re Gillard's dodgy history. (And he, unlike pretty much every one of his still employed former peers, has doggedly pursued the story since. Then there's all the Clinton Foundation stuff he's looked into; stuff that the rest of the MSM seems to have studiously avoided. Reflects on the profession just as badly as Labor joining the pile on.)

Also, remember that creepy Stalinist plan Labor had to censor the blogosphere? I recall them wanting to monitor everything online for badthink, and they were even talking about bloggers needing licences ... And wasn't that Jonathan Lea dude punted just recently for asking Shorten a difficult question? 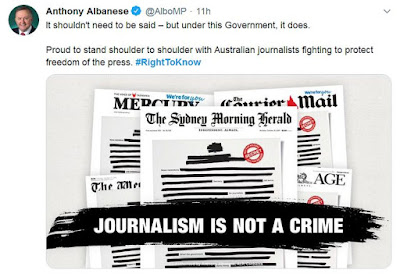 Cop an optic of the Ultimo Ken Doll below, with his fellow activists posing as journalists. This photo cracks me up!

Gawd. Gotta be the first time that these socialist snowflakes held eeevil Rupert's rags in an approving way. They'll prolly all frantically rush off to bathrooms to wash their hands yelling: "Eeeek! Eeeek! Unclean!" Rowland himself looks like he's just about to barf. What a laugh! 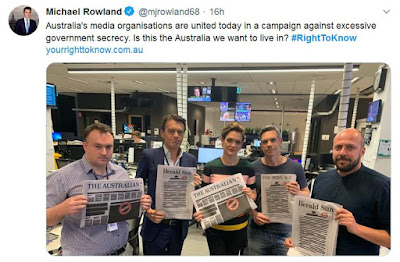 They look like a pack of zombies, a more sombre version of Extinction Rebellion, whose batshit antics they've been shamelessly promoting BTW. In the same way that those feral loons all claim to be raising awareness about "the science" of climate change but are actually just muppets mind-controlled by globalist elites, these clowns purport to be standing up for journalistic principles, but are actually mere political pawns being moved across a chessboard.

I mean, if they are dinkum journos interested in the free exchange of ideas why do they all pedal this crap about climate change skeptics being "denialists", and still tragically cling to the "Vlad the Imposter" conspiracy theory, among many other things?

And check out the shot below of their ABC staffers from the mild West. Do you think Gillian OShaughnessy and her ilk are against the chillingly censorious 18C legislation? Odds are they support it -- enthusiastically. Bet they're all on same page when it comes to SSM, gender fluidity, feminism, multiculti etc., too ...

These woke folk are much closer to being thought police than anything else. For them to claim they are free speech champions is just a big fat fricken lie! 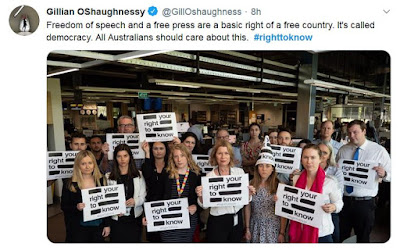 And boy do they ever look like a sad bunch of bolshie bozos (and bozettes). Not an original thought among them ... FFS, one of them's even wearing a fricken dunce cap! How apt.

If these people actually pursued the truth instead of relentlessly pedalling the bollocks PC narrative, I'd believe this campaign was a principled stand. But nup. Looks much more like (crap) political theatre to me.

So ... what's the real agenda behind it? Thoughts on what that might actually be below:

Posted by MattHaydenAU at 10:04 PM