While their ABC is the worst outlet for politically correct group think, the rest of the MSM is almost as bad. Commercial TV is chockas with hand-wringing, virtue signalling arsehats all toeing the globalist, warmist line. That's why I'm so glad there are people like Kerri-Anne Kennerley still working in it. She definitely possesses common sense and the courage to express it in very blunt terms. Maybe that is because of all the struggles she's had during her very long career.

Recently, on Studio Ten, she had this to say about the Extinction Rebellion protestors:

Personally, I would leave them all super glued to wherever they do it, the guy hanging from the Story Bridge. Why send emergency services? Leave him there until he gets himself out… no emergency services should help them, nobody should do anything, and you just put little witches hats around them, or use them as a speedbump.

I can imagine that the vast majority of normies watching the show heartily agreed with that sentiment. The XR protestors are just parasitic narcissists causing chaos. They aren't doing any good at all.

But KAK's spray seems to have been the only one of its kind in the entire MSM. She has been roundly condemned for the comments by many of her peers. And of course the Twitter trollective lost their shit big time over it.

Revealing to see how many misogynistic insults were used against her from those caring, sharing, feminist lefties ... You can be damn sure that many of those getting stuck in with the "dumb blonde" angle re Kerri-Anne would be appalled if those same insults were hurled at that other blonde "KK", Kristina Keneally. Most of the blokes among this mob would be white-knighting up a storm!

Says so much that Tony Windsor not only tweeted something so malicious and puerile, but happily left it up on the site. It shows that he knows he won't be held to the same standard that those sledging a prominent feminist woman would be.

Windsor has been a frequent guest on that excruciating right-on jawfest The Drum. Imagine if he'd tweeted something along the same lines about Ms Keneally. He'd be permabanned in a microsecond without a doubt! But because he's attacked a safe target he's almost certain to be on there bloviating up a storm again before long.

Speaking of The Drum, and its preferred narrative: Claire Harvey demonstrates how to condemn the protestors while still obeying the warmist, globalist line and thereby not risk being punted from future panels. 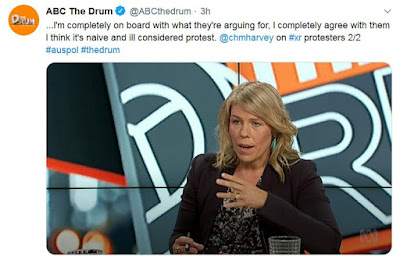 See, you can criticize the methods by which those hordes of shrieking, insane twats aimed to "raise awareness of climate change" and "help save the planet". But you must do it in a very mild, polite manner (unlike KAK). And you better not question their agenda itself. That is wrongthink. And it is verboten!

Clearly, almost everyone in the MSM has received this memo in one form or another and they obey it whenever the topic is discussed. This is extremely annoying. But it's also toxic to social cohesion and public mental health among other things.

Be great if the MSM stopped running the line that the narcissistic ferals have admirable goals. FFS, they are just useful idiots!