The New World Order really is a thing!

It always cracks me up that lefties sneer at those who believe that many powerful, rich elites and international socialists have long been working towards the creation of a centralized global government or "New World Order". The right-on line is that this is a deranged conspiracy theory pushed by swivel-eyed truthers.

But it's pretty obvious that PC lefties wanna erode sovereignty and absorb nations into a larger economic, cultural and governmental system that they control completely. Look at the EU and the UN. If they are not precursors to one world government -- that is, a New World Order -- I dunno what are. Anyway, there have been numerous well known people who have openly used the term over many decades.

I've become fascinated by this whole concept lately, which is why I found it amusing to see the term being used on the front page of The Australian recently. 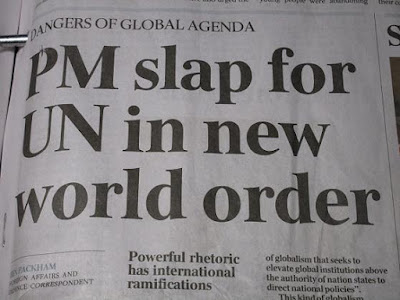 This was referring to the theme of Scott Morrison's Lowy Lecture the day before. This was pretty ironic because ScoMo was describing a policy direction that was more nationalistic and veered away from the New World Order. If anything, his speech signalled a return to an older one (and a good thing too).

This shift clearly had much to do with Trump's influence, which was upsetting to the socialists at The Guardian. 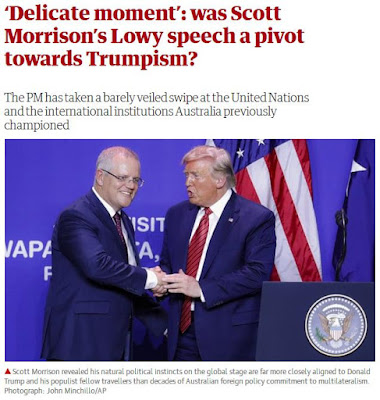 Morrison’s insistence “Australia’s international engagement will be squarely driven by Australia’s national interests” is unremarkable language for any leader.

Channelling John Howard, he cast this as a forthright but co-operative independence: “We will decide our interests and the circumstances in which we seek to pursue them.”

But what followed – condemning “a new variant of globalism that seeks to elevate global institutions above the authority of nation states to direct national policies” – echoed not only Trump, but Brexit figures such as Nigel Farage in form.

“We should avoid any reflex towards a negative globalism that coercively seeks to impose a mandate from an often ill-defined borderless global community and, worse still, an unaccountable internationalist bureaucracy,” he said.

“Only a national government, especially one accountable through the ballot box and the rule of law, can define its national interests. We can never answer to a higher authority.”

Notably, other MSM outlets fixated on this particular part of his speech. Being tools of globalist elites themselves, they don't like this at all.

But it's a really good sign for Australians generally. ScoMo was elected in major part because he was more of a nationalist than Shorten. And the fact that he's shown himself to be such a solid supporter of Trump is very heartening. Bolshie butthurt about it is better still!
Posted by MattHaydenAU at 11:23 AM