This weird press freedom campaign keeps going right across the MSM. There are stories in News Ltd dailies with a kinda logo that includes redacted text. It's all very slick and well thought out. There's even a dedicated website for it.

All the mainstream outlets are part of this and it is clearly meant to make the Government look furtive and sneaky. Odd to see all the TV, radio and newspapers so unified since they are often sniping at each other over various issues. Why have they buried the hatchet?

And think about the wider context: For years now Trump has been complaining that the Russian collusion narrative is a "witch hunt". And he's recently been claiming that the Dems are actually attempting a coup. The Whitehouse is now going on the offensive, with the declassification of what are reputed to be bombshell reports imminent. In the last coupla days the DOJ has made the inquiry into the origins of the Russia collusion narrative a criminal investigation.

And remember, there's a significant local link to all this. George Papadopoulos has long claimed that Alexander Downer -- whom he calls "Clinton's errand boy" -- spied on him at the behest of the Deep State.

Yet there seems to be no mention of this at all in the "Your Right to Know" campaign. Sure, press freedom is vital. And of course issues like those listed below are important. But there's definitely an elephant in the room here. It's from Adelaide, talks with a plum in its mouth, and has been known to wear fishnets. 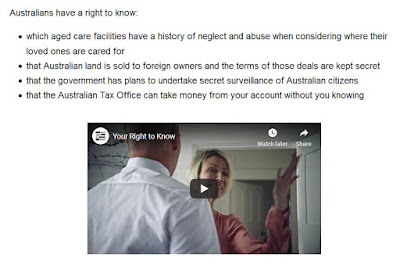 "Your Right to Know" looks very much like insurance for when the shit hits the fan. The MSM seem to be desperately tryna brainwash the normies into blaming the Government and not them for keeping Aussies in the dark over this. They (pre-emptively) doth protest too much, methinks.

And let's face it, they must've known heaps about this, and for a long time. Remember that politics is showbiz for ugly people. And Canberra, like Hollywood, is a hotbed for gossip.

Everybody in Tinsel Town effing knew about Harvey Weinstein. So surely everyone -- pollies, journos, the lot -- must've heard rumours of Australian involvement in the plot to derail Trump's run for President. Even if they were unfounded, surely they were newsworthy. So why have we only heard about all this recently?

This is a good Twitter thread on this theme. 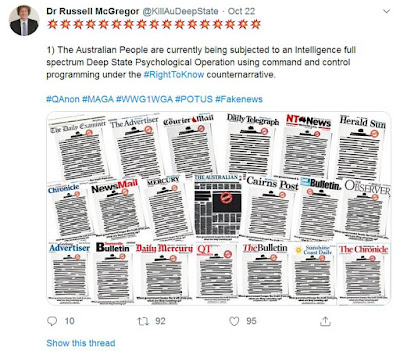 BTW, that guy, Dr Russell McGregor, had his career as a shrink nuked because he was posting about this whole QAnon phenomenon. The Medical Council of NSW said it was a "paranoid conspiracy theory". So ironic because if anything deserves that label it's the MSM's official "Vlad the Imposter" line. Yet it's so obviously BS on stilts! (I talk about this in the second half of this video. Please check it out.)

You'd think that such an extreme, official reaction against one highly qualified professional over what he posted online would be newsworthy in itself. Yet AFAIK Dr McGregor's plight has not been reported at all in the MSM. Weird, eh?

There are other aspects to this whole "press freedom" campaign that make it seem so suss. Thoughts on these below.
If you've enjoyed this post, please consider supporting me via Ko-fi.

Posted by MattHaydenAU at 11:25 AM