I've often written about the contempt that those who run Australia's mainstream media outlets have for their readership. Here's a good example of this that also shows them to be occultist flogs.

As mentioned previously the way to pick up the symbolic patterns is not to look at each story and ad separately, but to take in the whole picture, so to speak. Look at it as though it's a modern art work that uses images and text.

Take this recent issue of the Failing Terrorgraph. On the left of this frame you see a greyhound adoption agency ad. There's a lot of blue in it. Doubt that there was any intention for that organization to make this echo the dog star, but I reckon it was placed there for this reason. There seems to be at least one blue dog in every issue of this paper. 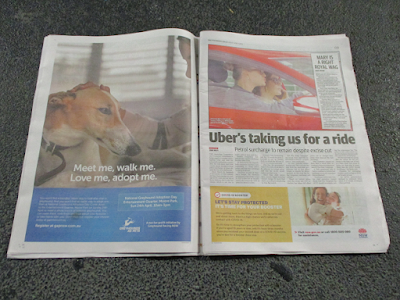 On the right hand side is a story about how Princess Mary was at a Melbourne eatery usually frequented by celebrities' and footy players' "wives and girlfriends". So the headline reads that she's a "right royal WAG". 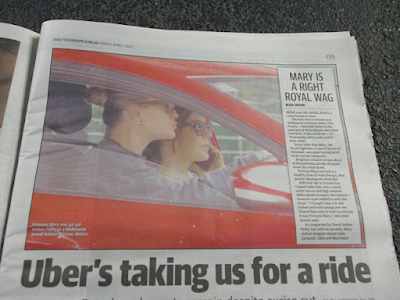 Note the headline directly below about the Uber fares story.

Those of royal stock are supposed to be better than us mere normies, right? They are super or uber-humans.

Combined with the ad on the other side the subtextual message is that the royals are "wagging the blue dog". That is, these blue bloods are inverting reality completely and taking us all for a ride. This MSM lie factory, which like all of them is run by secret society wankers, thinks it's all a big laugh. Actually, they're all for it.

They're so confident of their ability to deceive their own readership that they put this kind of message right there in their faces. Once you realize that this is actually what they're up to you see it often throughout the paper. It's truly sinister and disturbing.

Speaking of blue dogs: This looks like another attempt to drop that symbol into the MSM narrative by ScoMo's handlers. 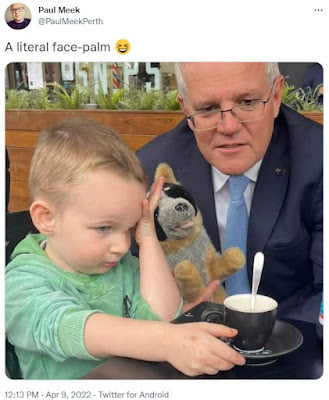 Note the blue heeler toy that ScoMo seems to be waving at the unimpressed kid.

Below is a video I made when I started to notice how weirdly popular a cartoon character based on that breed was with so many pollies and slebs.