It may sound crazy to say that globalist elite scumbags are using mainstream media outlets to keep their creepy mates up to speed about what's happening behind the scenes with coded comms. But they ultimately own and control these platforms, remember. Given their obvious contempt for the masses and their love of deceiving them on a grand scale, this brazen "hiding in plain sight" tactic is just their style.

I've seen many strong patterns in big media outlets, the Failing Terrograph in particular, that suggest this is actually what they're up to. The headlines and images on the covers and in the stories contained within the paper are often used for this purpose. So are the cartoons.

Of course you'll recall that excruciating performance of "April Sun in Cuba" by ScoMo. In a previous blog post I speculated that this may have been some sort of symbolic signalling related to the PM eventually being taken to Guantanamo Bay, most likely to due to his involvement in Spygate and perhaps other matters.

As well as the aspects covered in the post there was absolutely no denying that, quality aside, it was an extraordinary rendition. I think that in itself may have been part of the comms.

This toon appeared in the Sydney daily soon after that notorious episode of 60 Minutes. Below is a shot from the paper itself and I thought it was interesting that the word rendition was used in the tweet description of the cartoon on the day. 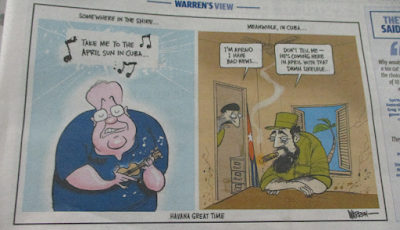 Note how the title is "Havana great time". Time is what you serve in prison, innit? While "great" is not a close synonym of "long", it's still related. You can go to "great lengths", after all.

There are prominent musical notes above his head as he plays the ukulele.

The cartoon below was from April 7. Obviously, it's all about the Prime Minister's rapidly plummeting popularity and how he now has a lot of determined enemies. 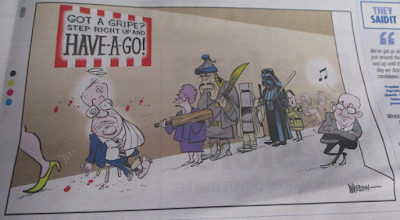 There's clearly a message here for secret society wankers and other occultist flogs because one eye is drawn much larger than the other. They love that kind of symbolism, remember.

The sketch includes that other fave motif of theirs the upturned feet, baring the soles. And one shoe is off. That's very Masonic.

I think the one bare foot could also be meant to hark back to the previous cartoon. See how two of the musical notes have two "legs". But one of them does not, is bigger than the others, and is actually (right) leg-like in appearance.

Look also at the lyrics to the song in the first drawing. The light shining behind the words is reminiscent of the blazing star, another Masonic symbol.

The picture's clear message is that there are countless people baying for his blood. This is echoed visually with the spatter behind him on the wall. The sign above his head is also red and white. That's something I've seen a helluva lot of in the MSM lately.

I've long thought this was meant to evoke the Red Cross and the barber shop poles of yore but think it could also be related to the Wilson volleyball from the movie Castaway starring big time secret society wanker Tom Hanks.

That aside, note the red vertical bars. Could be suggestive of a prison cell, right?

The sign says "step right up". This idea of stepping is part of the elite occultists' love of shoe, boot and leg symbolism. And which of Scott Morrison's shoes remains? The right one. There's likely much symbolic significance there.

Then there's the alliteration in "Got a gripe?". Governor General comes to mind. It also gives the phrase a strong generalized Masonic vibe.

"G" is also part of the exhortation to "have a go". And what are the first and last letters of Guantanamo?

I'm thinking the message might be: "He's gonna go to Guantanamo."

But the clincher is in the beginning of that phrase. The first two words "have a" are almost identical to the first two syllables of "Havana". Seriously, what are the odds? 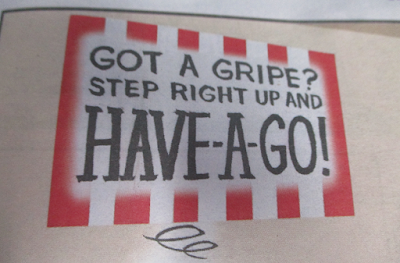 But if you still think that my "conspiracy theory" is batshit crazy nonsense and there's actually no sneaky instruction to thematically clip the two comic strips together so you can divine the subtextual message, check out Albo over in the corner in the most recent cartoon. 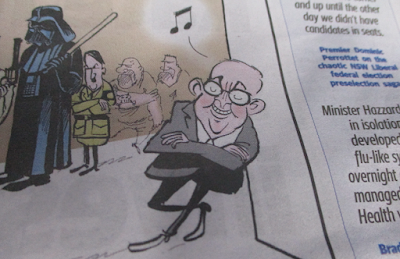 He's whistling to himself, with a pair of musical "legs" appearing above his head. While it certainly concurs with the surface meaning it is kinda superfluous, innit? The requisite smugness is completely supplied by the image of Albo leaning against the wall -- left foot forward, BTW -- on its own.

I think that little musical symbol was put in to remind a very specific audience about the previous toon.

As well as these data points I've seen plenty of others that suggest there might be some kind of plan to remove the PM just before the election with a plausible cover story. Please check out the video below and you'll see more that simply cannot be explained by chance.

Posted by MattHaydenAU at 4:27 PM