Only a week or so ago I posted about a bizarre pattern in the MSM to do with pandas and pink hearts. If that wasn't weird enough, there was another story that featured a panda not long after that. Critter escaped from its enclosure and was run over, apparently.

This absolutely has to be some sort of symbolic incantation or comms. It cannot have happened by chance.

Think about it: Sydney paper publishes story about cute baby red pandas on March 11. Then in the March 19 issue there's a piece about how a red panda escaped from a wildlife park near Sydney and was killed by a car on a road. What are the odds?

The way the story is presented is interdasting also. 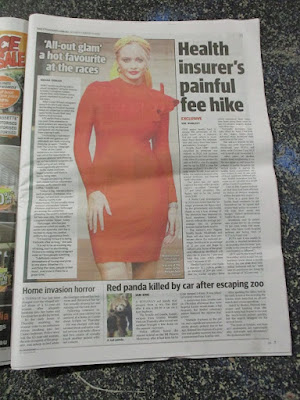 See how it's at the bottom of the page. There's a photo of a red panda, and it's exactly underneath a woman in a red dress. That story is about stunnas getting dolled up at the races. I think they really like horses because of the idea of horsepower, which brings to mind cars (traffic).

Note also how her right leg is directly over the red panda. 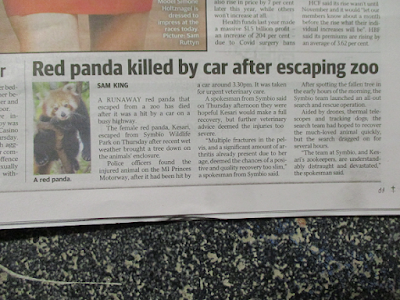 Secret society wankers love their shoe, boot and leg symbolism. And they have form for this alignment trick. There's an example of it at the bottom of this post about another of their fave symbols, the blue dog.

I think this is about the horrific hidden business related to "panda eyes". Note also the headline on the top right hand side of the page. It includes the words "painful fee hike".

Perhaps they're saying that the whole evil trade to which they refer is no longer in the black but is now in the red? Or maybe it's just more symbolic incantation to keep the whole sinister vibe going.

Whatever it is, it's creepy as all get out. And the pattern is undeniable.

So if you wanna debunk my "conspiracy theory" then saying "you're batshit" isn't good enough. You have to offer an alternative explanation for something so unlikely that it could not possibly be a random event. If you have one, please submit it in comments.

Posted by MattHaydenAU at 1:08 PM