I know that some people reading my blog and watching my videos might have concluded that my obsession with symbolism in the MSM means I've taken a swan dive into the deep end of the crazy pool. To those people I say: Explain this, then!

This was from the Failing Terrograph's March 11 issue. Note the story about privacy concerns that parents are having regarding plans to make primary school toilets unisex. Above that is a story about a red panda. 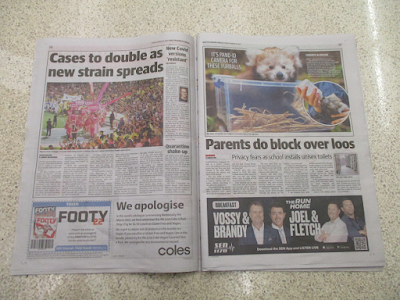 There's a very disturbing rabbit hole to do with giant, black and white pandas and their eyes which I suggest you look into. Even though the species is different, this symbolism seems related to that. 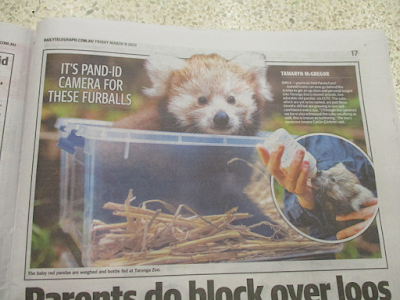 Note the headline "It's Pand-ID Camera for these Furballs". This describes the kind of techno-surveillance that is planned for humans. But it also brings to mind "panda eyes" which I mentioned above.

The term "furballs" is also notable. That's because balls seem to be used as symbols of a drug related to child trafficking. I think this is because the patches on soccer balls resemble the compound's molecular structure, though it could be for some other reason.

In any case, this is pretty creepy, particularly when you look at the headline directly below.

Then there's the page on the left. 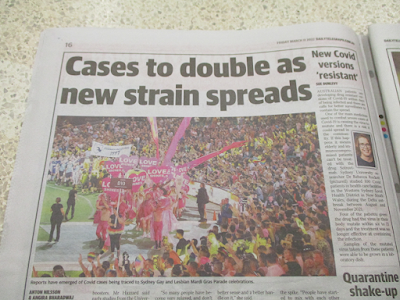 It's about the Sydney Mardi Gras. It has a 'rona theme, which is often used as cover for comms. Note the pink love hearts.

Remember that pink is a way to allude to the drug I mentioned above because that's what colour it is. And of course hearts pump blood around the body.

Now, look at this story. 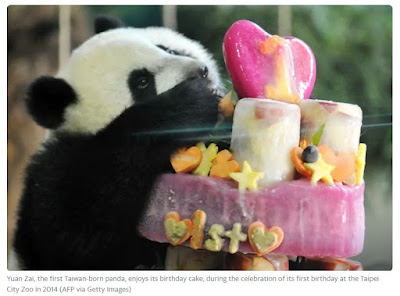 It was about a giant panda in a Taiwan zoo getting too fat. The photo is what he got for his birthday from 2014. Note the pink heart motif.

Remember that Taipei looks like it could become the next Ukraine. But instead of Russia invading it will be China.

The MSM will say it's because of China's imperial ambitions. But maybe it's to clean up all the Deep State, swampy evil, which includes child trafficking and related criminal activities?

And it gets weirder. Yesterday I noticed a poster on a bus for the Disney movie Turning Red. The trailer is embedded below, BTW.

When I got home I noticed this update from the West Australian. 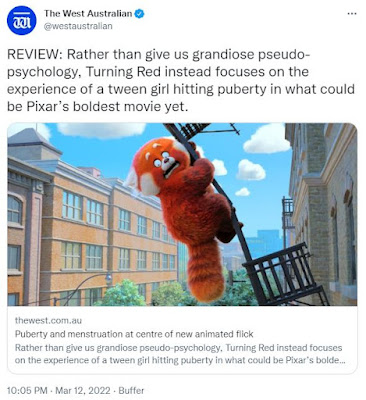 It was a review of this very movie! Spooky synchronicity ... or maybe more evidence that all the MSM outlets are being given tasks from some globalist command centre? I think the latter.

Note how it's about menstruation -- that is, blood.

Speaking of which, only fifteen minutes later the paper posted this tweet, again with a 'rona theme, which shows two women drinking red liquid. Not sure of the names of these cocktails but I think one might be a Bloody Mary. 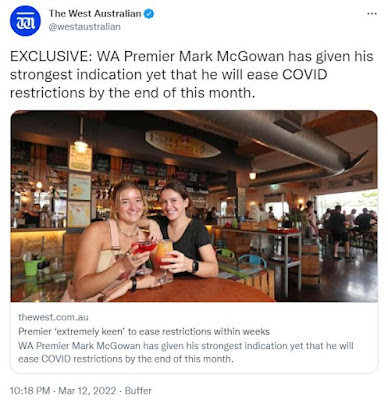 Back to the movie itself. Check out the trailer. It's all about "unleashing the beast". It's absolutely chockas with occult elite symbolism including the ol' one eye, shoe soles exposed, and an explosion of pink smoke as the heroine transforms into the giant red panda.

Note the logo right at the end. Clearly reminiscent of rabbit ears.

There's something vast and centralized going on here people. Not sure exactly what it all means. But the pattern is undeniable and sinister as.

If you appreciate these posts please consider supporting me via Ko-fi. Aussies, know your rights!

Posted by MattHaydenAU at 5:09 PM