The more the cray cray intensifies, the more I'm convinced that there are absolutely epic forces involved. There really is a battle between good and evil raging now.

I'm not a religious person. I have long been an atheist. Now I tend towards agnostic. So I'm not looking at all this insanity zif it's the "end times". But clearly there are many in the media who are obsessed with biblical imagery. And we know they're definitely not devout Christians as a rule. So what's behind that, I wonder?

Something that really stands out is the relentless symbolism to do with blood, hearts, and the drinking of red and pink liquid. There's also a lot of imagery to do with hell and fire.

Take the recent cover from the Sunday Times. It's not just a conflagration in the bush. It's "hell on Earth"! 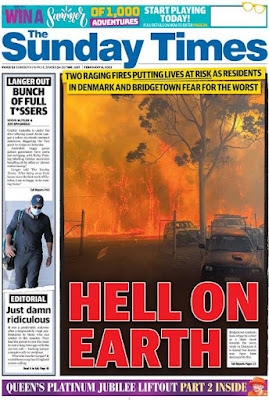 The same vibe is present in the other stories on the page. The teaser for the Justin Langer editorial has the headline "Just damn ridiculous". Combined with the main headline it evokes "hellfire and damnation".

Above that item is another story about the cricket coach controversy. It describes the coach as being "under fire".

I first noticed this tactic of subtextually linking imagery and headlines in the Failing Terrorgraph. But it seems that all the newspapers do it. I suspect that one of the main criteria for getting a gig as an editor in the MSM is to be a secret society wanker who's shimmied a fair way up the greasy obelisk. If you're on that level then you'll happily throw in the fave symbols of the occult elite whenever you can.

I think that they're basically tryna concentrate spiritual energies to intensify the vibe or something. So maybe that flaming cover above is hinting that we are in the end times. Except it's from the perspective of one who's "batting for the other side". I think you'll agree, that's just not cricket.

Another example from Perth. 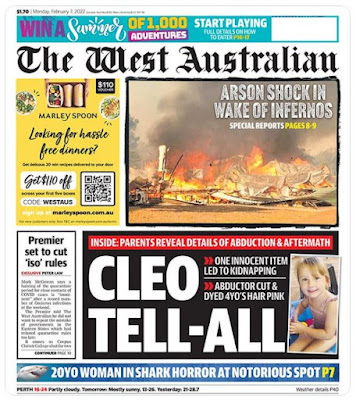 This is the cover of the West Australian from the 6th of February. Notice how it says that Cleo Smith's abductor dyed her hair pink. The number of times you see that colour featured, it clearly means a lot to these people.

And "Cleo tell-all" is a bit creepy, innit? Sounds like they're describing a risque interview with an adult sleb or something ...

Look at the top of the cover. The headline says "infernos", evoking that pandemic-themed film starring high ranking Freemason Tom Hanks. Spookily, a few days before this issue I'd made a video about this "pink fire" motif because of the MSM patterns I'd seen.

See how the photo shows the little girl in pink. Note also how right next to it, the headline says that the abductor cut and dyed her hair that hue.

Check out the headline to the left. There's the word "cut" again. What are the odds that exactly the same word would appear in unrelated headlines twice on the same cover? This is some sort of sinister symbolic incantation for sure. 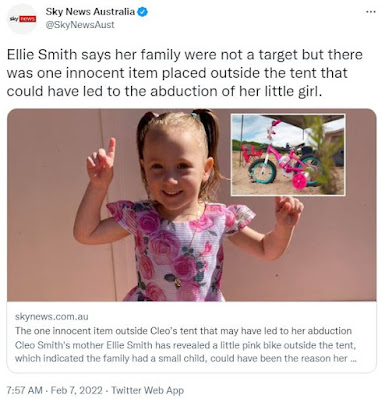 Look at the similarities in the tweet from Sky News, which is also run by occultist flogs. It has that photo of Cleo Smith that we all know because it's been repeated so often in the MSM.

The pink flowers are a recurring motif. The number of times I've seen photos of floral dresses in particular is just off the charts.

Why do both outlets use the same description for a bike? They call it an innocent item. Aren't all kids' possessions innocent? Strange that it would be described this way. Strange that both would use it ...

I think this is another creepy kind of code. The bike is a mode of transport. IMO they're alluding to child trafficking. Please check out this video if you think that's a ridiculous claim.

Notice how she's pointing up in the air. I think they like this pose because to them it evokes the harvesting of a drug symbolized by the colour they're clearly so obsessed with.

Maybe this is what Gudinski meant when he used that gesture, which was in so many photos of him. It means "feed the Eye" or something.

Which brings me to this recent think piece in the Failing Terrograph (January 22). 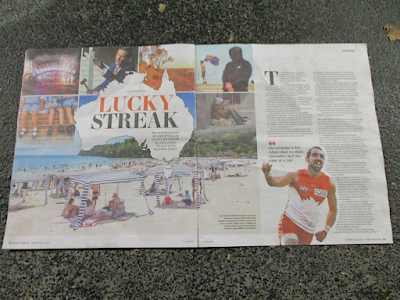 The visual elements that first stood out for me were the many distinctive blue and white sun shades on the beach. They were clearly reminiscent of the temple on Epstein Island.

I think the subtext was that this was the occult elite's plan for Australia. They were saying that the nation's lucky streak had ended. Now, they would finally get to run the joint the way they wanted to!

The three photos on the top left are the most interdasting. 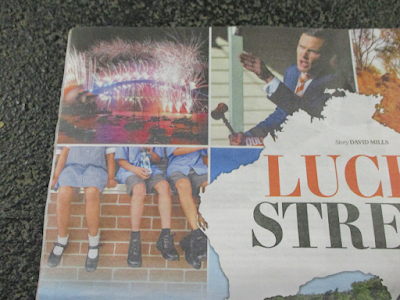 Look at how the kids on the wall (a Masonic image) seem to have been symbolically decapitated. And the fireworks are where their heads would be. Also, pinky-purple dominates that particular shot of the iconic Coat Hanger. Then there's the auctioneer. His eye-line is level with the fireworks.

I think that's meant to symbolize the globalist elite's plan for Australia. Among other things, they want free reign to buy and sell kids so that their spiritual energy can be harvested in the form of this pink drug.

And there is no doubt that these ghouls are coming for the children. Look at what they're doing with the jibby-jab-jabberwocky-jabberoo. They are frantically tryna stick syringes into every kid in the country.

They wanna create a hell on Earth so they can "pharm" us in various ways. They see us all as "steak on the table". They see themselves as demigods who have a divine right to consume this human energy, this "pink fire". While it's in everyone it's reputed to be in its purest, most valuable form in children.

Speaking of which, I did a YT search for the term and found this video. This looks like a pretty clear allusion to this drug. Same with the artist's name.

The video below really encapsulates what it's about. The "White Rabbit" is like the colour in that it also represents the drug. That's because of its molecular structure.

Gotta give credit where it's due. Unlike ScoMo and Dragon, Pink does a brilliant rendition of the Grace Slick classic. Notice the clear "Hunger Games" vibe, as well as the pinky-purple flowers everywhere.

The location is significant too. It's outside the El Capitan Entertainment Centre, where the Jimmy Kimmel Show is filmed. That's what was originally the LA Masonic Temple. You can see the pillars in a couple of sections of the clip. I mention it in this video, BTW.

The song finishes with a climactic exhortation to "feed your head". Perhaps some of the secret society wankers in the upper echelons of the local MSM are consumers of this drug and are as intoxicated with it as Pink herself seems to be. I don't know for sure. But it's clear that they are doing the bidding of those even more twisted death cultists above them in the power pyramid who are definitely hooked on it big time -- and in more ways than one.

Posted by MattHaydenAU at 6:23 PM