Since having discovered that mainstream media outlets are constantly being used by their batshit death cultist masters for symbolic incantation and/or specific comms, I can never look at any newspaper or current affairs program in the same way again.

Trick is to look at each page as if it's a little work of art. That would be the postmodern variety, of course. So it's definitely crap art, but it's art nonetheless.

Do that and you start to perceive all sorts of creepy patterns emerging over time. One that I've identified lately is a splashing motif. The term "kids' splashback" mentioned in this video is a case in point.

This is one of the more subtle recent examples. It's from the February 18 issue of the Failing Terrograph. It's right next to a striking headline, thereby suggesting a subtextual theme. 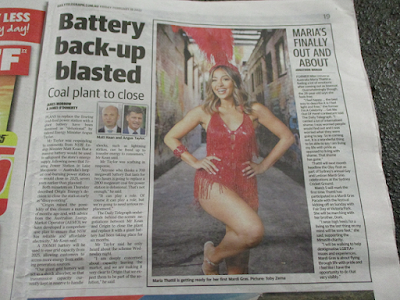 See how the chick in the story is wearing red. That's often symbolic of blood. And here has been heaps of other imagery and wordplay related to that recently.

The article itself describes how she's coming out as bisexual or something. So there's the cultural Marxist angle, a divide and conquer tactic favoured by globalists.

Notice the plumes. This combined with "out and about" in the headline evokes splashing from her head. It's like her mojo, her spiritual energy, is going "through the roof"!

It's next to a story about renewable energy, another big part of the globalist agenda. The alliteration of "battery backup blasted" is reminiscent of "build back better".

So while these two articles are totally unrelated content-wise, they combine to portray the occult elite's vision for the future. They have this grand plan in which we're all stacked up on top of each other in tiny pods in "smart cities". We'll be eating bugs while they harvest our lifeblood -- literally as well as figuratively.

Posted by MattHaydenAU at 4:43 PM