You may have heard about the symbolism of red shoes. They are an occult elite favourite, with many rabbit holes related to them. Some of the main ones are about mind control.

You often see them featured in the MSM. I first started noticing this back in 2018.

I have seen them time and again in the Daily Telegraph along with many other occult elite motifs. They clearly mean a lot to whoever's dropping them in because you see them so often. The sheer amount of time and effort being put into constructing these symbolic matrices is quite amazing.

Lately the footwear seems to have more of a pink theme. I think this has something to do with a certain notorious compound that is supposed to be the fictitious creation of batshit conspiracy theorists, but is actually real. Its most famous film reference is in Fear and Loathing in Las Vegas. Notice the pink hue suffusing the whole scene. This video has more data points related to this bizarre and sinister pattern.

But back to the red and pink shoes specifically: This was a page from the November 12 issue. Notice how Harry and Megan are both putting their left feet forward. I think this refers to Operation Lockstep, and there's an example of this in the video linked above. 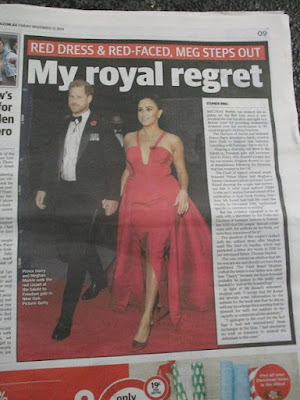 As you can see she's wearing red shoes. They look like they might be satin, too, bringing to mind JBish. 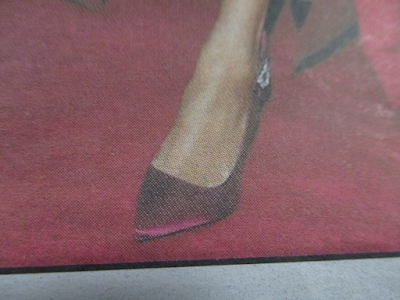 That was on page nine of the issue and on the other side is a story about some cocky young dude allegedly linked to the Alameddine crime gang dodging a bullet. The photo chosen has him wearing pink shoes and stepping with his left foot forward, echoing Meghan Markle on the previous page. 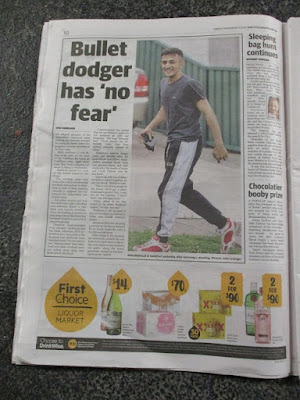 Not only that, but the position of his left foot lines up exactly -- and I do mean exactly -- with Markle's foot on the other side. There is no way that was a coincidence. 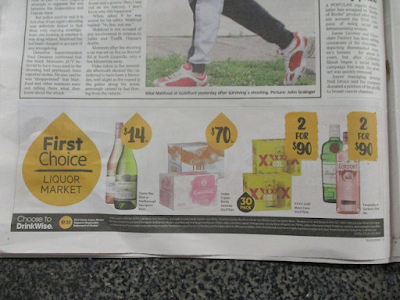 Also, check out the liquor ad directly below the image. See how the pink coloured spirits correspond in position to his shoes. Again, not an accident and the video embedded below includes other examples.

I think that this is some reference to that compound I mentioned, since it is often symbolized by red wine (see video above).

I know all this stuff I'm describing is completely and utterly batshit. But don't call me crazy for pointing it out. The patterns are there and undeniable. If you've got a benign interpretation for what they might mean, great. Leave it in comments.

But the simplest explanation -- and therefore the one most likely to be true -- is that these are symbolic incantations related to the NWO agenda, which is all about globalists creating chaos so they can bring in their totalitarian order.

Posted by MattHaydenAU at 12:55 PM