I've written many posts about the occult elite symbolism in the Failing Terrorgraph as well as the Twitter feed of Sky News. Turns out that the West Australian is just as creepy as both of them.

This is the cover from yesterday's issue. Notice how the main story specifically invokes The Hunger Games. The plot of this film -- which Brad Health Hazzard also mentioned in one of his putrid 'rona-themed brain sharts, BTW -- revolves around satanic cruelty to children.

The sub-heading also focuses on floods being a major cause of the empty shelves. Gives it a kinda biblical vibe.

Chaos is mentioned as well. That's how these arseholes get their desired order, remember. 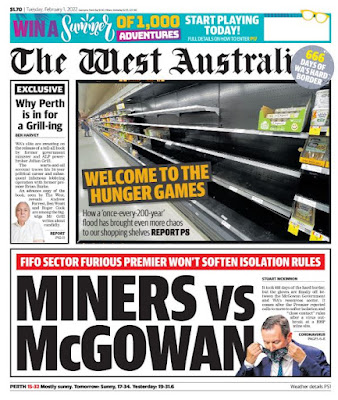 On the bottom of the cover is a story about the 'rona. I think the alliteration in the headline is interdasting. Is it meant to suggest "Master Mason"? Also, replacing one letter turns miners into minors ...

I don't think that speculation is unjustified. They are flat out saying that the empty shelves are part of a game, after all. The globalist elite-controlled arshehat SkidMark McKaren is the one orchestrating it locally. And while the moronic narcissist always looks creepy, he seems even more sinister than usual here as he dons his designer face diaper.

Notably, in the first paragraph of that mining story they've included their favourite number: 666. You might not be able to see it in the screenshot on the cover but it's there. They even dedicated a tweet to it. They clearly felt it was very important to get out there.

Also, notice the gastronomically themed headline on the left hand side of the cover. That gives it duality via "famine or feast" symbolism.

Maybe there's more to it. Perhaps the sinister rag's occulist editor is tryna impress his secret society wanker mates with a little cannibalism joke, not unlike this one.

And check out this toon from another recent issue. 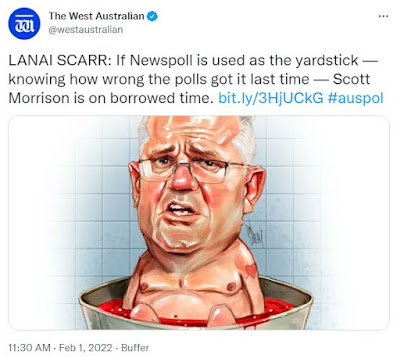 It's ScoMo in a bucket of blood. What are the odds?

They couldn't make it any more obvious, could they? This pervasive symbolic pattern confirms that many high up in the MSM know what's really going on behind the scenes.

They know that it's the Epstein-level tier of elite psychopaths who are ultimately and intentionally causing all this madness. Rather than tell us the horrific truth like real journalists would they zealously promote the propaganda of the globalists who ultimately own them, engaging in creepy symbolic messaging like this.

Posted by MattHaydenAU at 1:34 PM