Some more thoughts on that bizarre ukulele performance by ScoMo recently: I don't know for sure what it all meant. But it had to be symbolic. And it was definitely about Gitmo.

Remember that "April Sun in Cuba" has lyrics about "Castro in the alley way, talking 'bout missile love". Scott Morrison is the Prime Minister of Australia, FFS. And he chose a song that we all know alluded to global conflicts of yore. If you've got your thinking cap on, surely that would be intriguing to you, wouldn't it?

But at least AFAIK not one of Australia's so-called journalists or pundits in the MSM has remarked on this aspect of the "impromptu" performance. Says so much, because it's pretty clear that we are in a massive paradigm shift. The big conflict now is between globalism and patriotism. World politics are now as volatile as they were during the Bay of Pigs invasion. And the Dragon hit does refer to that.

Rather than ask a few questions about this context, all our well known "big thinkers" did was quack on about what a daggy dad he was, and how he's got no effing clue about how his actions were viewed by the public, etc.

That said, I suspect at least some in the MSM were aware of jaw-dropping developments behind the scenes. But they didn't wanna tell us -- or they did but were not allowed.

Their employers are ultimately owned and controlled by the globalist elite, after all. So they have to keep flogging the old narratives and keep the corrupt system going.

But some of them did make the odd hint to their peers about what the real story was. Take this tweet for example. 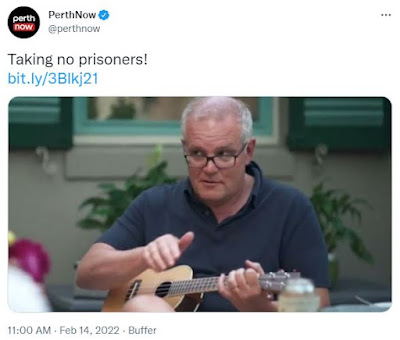 That looks like a pretty clear allusion to incarceration.

And there's no denying that as renditions go, the whole excruciating performance was definitely extraordinary. Was that in itself some kind of hidden message to a very select group? 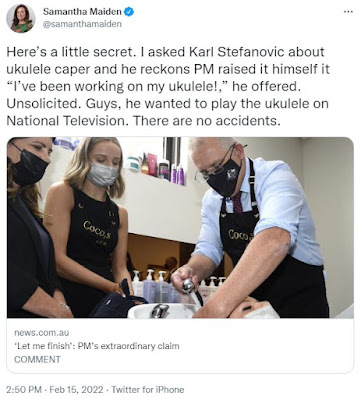 "There are no accidents." Exactly. In other words, everything is orchestrated. Well, ScoMo's ghastly yodelling wasn't literally that but you get my drift.

Clearly, he knew that if he sang a song at dinner time it would be included in the final edit of the piece and would be a big news story. My guess is that he was ordered to do so by his current handler. So he obeyed.

Was this person a "white hat", or another Deep State figure? I'm not sure. But there's little doubt that millions of Aussies were meant to see the PM make a fool of himself, and with this particular song.

And there was definitely a hidden message there to those in the know. So what was that? Could've been to gaslight them, keep them up to speed, or some other reason ... Maybe it was just for shits and giggles?

Whatever the reason, there was something else I found interdasting. It was a cartoon in the Failing Terrorgraph on February 15. Note that the term rendition is used in the tweet description. 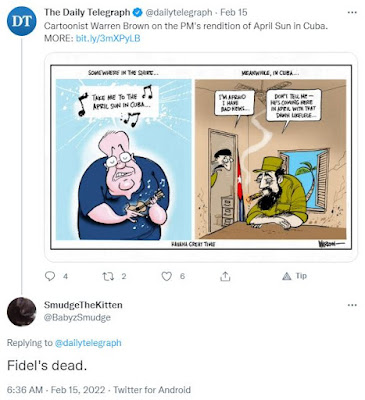 It shows ScoMo trilling away happily. And there's Fidel Castro himself being given the bad news about the doofus from Down Under arriving in April.

My first thought upon seeing it: This doesn't make sense! Fidel is deceased. (And his extremely old brother Raul is rumoured to be dead, too.)

As you can see from the tweet, others noticed this too.

Sure, it's just a toon. But it still has to correspond with reality on basic issues like chronology. Otherwise it just doesn't work. There's no way that, say, Bill Leak would make such a glaring error.

So why did this guy Warren Brown do so? He's not in Leak's league but he's not an idiot.

I think it was meant to be jarring so that a select few would think about what the hidden meaning might be.

Could showing a miraculously extant Castro have been a sly allusion to Fidel Junior over in Canada still continuing his real dad's communist revolution?

Or was it some kind of heads up about the "white hats" and Mysterious Mr Seventeen? Remember that a big aspect of this so-called "conspiracy theory" is how many of its adherents believe that JFK Junior will rise from the dead.

By reanimating Castro, were they implying that ScoMo's song -- which explicitly mentioned John-John's dad -- had something to do with this whole alternative narrative?

And look at the flag, and how the cigar is lit just near it, just underneath the red and white section. This seems to be symbolic of blood. It's related to this sinister pink fire motif that I keep seeing.

What do you do in prison? You serve time. And great could also mean long. 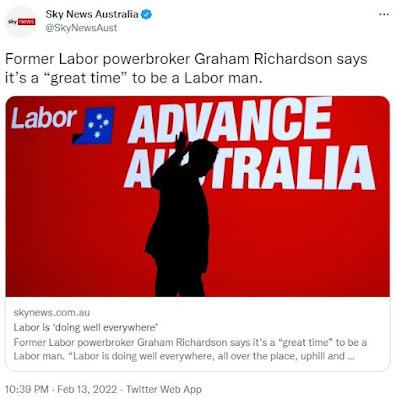 The exact same phrase is featured in this tweet from Sky News just two days before the toon. Is the hidden message here that ScoMo is gonna end up at Gitmo? Or maybe it means that the Labor leaders -- clearly controlled by the globalist elite -- are themselves destined "for the high jump".

Again, I'm not sure. But really, what are the odds?

Look closely at that particular photo. The outlet likes it so much they've used it several times. I think it's because it's red and white, evoking blood. And look at the "V" above Shorten's head. Whether it's Y-head and/or (white) rabbit ears symbolism, I doubt that's a coincidence.

Finally, check out the clear "white hat" reference in another recent issue of the Failing Terrorgraph in the video below.

Yuge things are habbening people. The occult elite are clearly frantic. So hang in there!

If you enjoy these posts please consider supporting me via Ko-fi. Aussies, know your rights!

Posted by MattHaydenAU at 12:40 PM