A New World Order hellscape in your face!

It's now undeniable that the globalist elite are desperately trying to take us into this "New World Order". As well as all the other data points confirming this pattern, national "leaders" are openly using the term with increasing frequency.

The creepy elites see themselves as artists and the world as their canvas. We lowly "useless eaters" are the paint. So they often try to facilitate this transformation process with "artistic" events that they engineer.

These could also be seen as symbolic incantations or the casting of spells. After all, the occult elite are clearly a truly batshit bunch -- wanky warlocks and whining witches, the lot of them!

That's why I think that recent lethal fire in that Sydney boarding house could well have been engineered. It was bang in the heart of of Newtown after all. And the horrific event did include many creepily symbolic elements, which I cover in this video.

As mentioned the Failing Terrorgraph has form for occult elite symbolism. The whole paper is chockas with it. Blue dogs, shoe and boot symbolism, creepy numbers like 33, 666. And the cover has some sort of subtextual message more often than not.

Take this recent issue, just after that fire. See how there are two main stories, one about the accused arsonist, and the other about booming Parramatta and nearby areas. 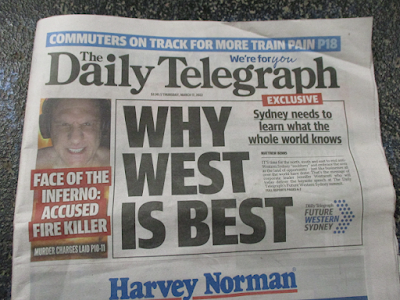 They will often clip the two stories together with key words or images, thereby suggesting an underlying symbolic theme for those in the know.

Read them through and you get: "FACE OF THE WEST. FIRE KILLER IS BEST."

BTW, if you think this is just another coincidence then check out the video embedded below. A similar trick was used, along with other disturbing symbolism to do with kids and hearts.

So they're basically saying that they look forward to a hell on earth in which their creepy secret society wanker mates get to completely run the joint out in the open, basically plundering humanity for its mojo as described here.

Posted by MattHaydenAU at 1:48 PM