So we've all heard the shocking and sad news that Shane Warne just died. Many are saying that it was because he got the jibby-jab-jabberwocky-jabberoo.

I'm not convinced by that theory TBH. I think there's something else going on here. I'm not quite sure what it is. But the orchestrated weirdness that now consumes us in so many ways is just off the charts! And my spidey senses are telling me that this tragic development is another example of it ...

Anyhoo, can you trust the mainstream media to tell you the truth about anything ever again? Look at the absolute bollocks they're cranking out about Ukraine, FFS!

They say there was no foul play in the cricketing great's death. And they are making much of his haunting final tweet in which he used the heart emoji. Is this some kind of sick mockery of the readership? They do love to do that so I wouldn't be surprised if it is.

Sounds like they know the truth, and they're not letting on. They're just giving the normies massive lies like they always do.

It's like with Bob Saget. First angle was that he died in his sleep from a heart attack. Then it turned out he fell and hit his head before going to bed. Since then his family have been fighting hard to keep photos of the death scene secret.

Sounds like Saget was whacked TBH. Not sure of the deal with Warnie but famous Aussies have been dropping like flies lately. It's suss as.

Not only that; in several cases their deaths were preceded by a fall.

It's like these events have all been part of some weird mega-ritual being run by secret society wankers. They love their shoe, boot and leg symbolism, after all. Which is why the falling is so interdasting.

While this element doesn't seem to be part of Shane Warne's death, he was the greatest ever leg spinner, after all.

Speaking of which, I noticed this item about Liz Hurley last year. 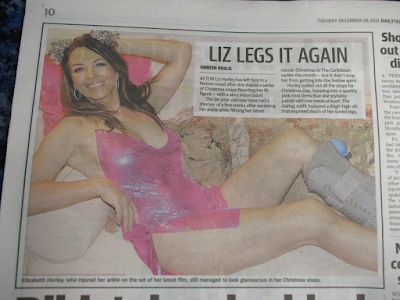 The Failing Terrograph has form for occult elite symbolism so I think there was some sort of hidden message in there somewhere. Notice the headline and the pink theme.

She was wearing a moon-boot, too. Know who else was recently? Patti Newton, and she had it on her right leg around the same time that hubby Bert was in hospital after having his right leg amputated. He died not long after that.

Seemed so suss to me that I made a video about it at the time. It seems even more suss in retrospect.

Then there's the fact that Liz Hurley was linked to billionaire Steve Bing, who also died suddenly not long ago.

Now I'm not for one second suggesting that the spunky Brit actress had anything to do with Warne or Bing's death. It just seems that she, like so many A-list slebs, has long been part of a vast and very creepy control system masterminded by the occult elite.

These psychopathic arseholes, who are in the Epstein Island tier, are truly evil people. It's likely that some of the slebs whom they've elevated know their more explosive secrets. Maybe they're being offed as a precautionary measure?

Or perhaps they're actually being kept safe from potential harm by the "white hats" because they have this knowledge and their deaths are being faked. These guys certainly do have a sense of humour. And if this is the case it would be one helluva troll of the globalists, wouldn't it? 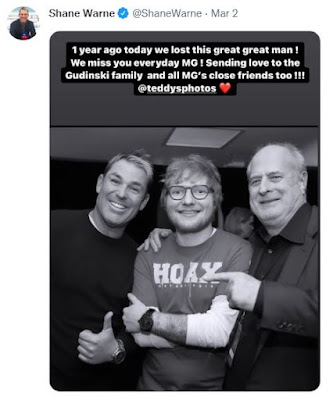 Eagle-eyed Gab user Tree Whisperer noticed this recent tweet of Warne's. Ed Sheeran's T-shirt is pretty noticeable, innit? I actually mentioned it in this video about the symbolic aspects of a TV segment about the "late" music entrepreneur.

It certainly does lend credence to the above theory. Maybe Warnie, Gudinski and others are not dead at all but have been given new identities and are sipping Pina Coladas poolside in far-off lands?

Yeah, sounds impossible but things are so cray-cray at the moment it would not surprise me in the slightest if this were actually the truth.

But back to the death cult witchcraft angle: It's well established that the occult elite love wordplay as much as visual symbolism. So maybe Governor General David Hurley's absence is also part of the chaos the wanky warlocks are weaving to compound their beloved chaos?

With that in mind, please check out the opening scene from Roman Polanski's classic version of Macbeth. But instead of three hatchet-faced crones imagine a dapper bunch of high-ranking Freemason blokes meeting to cast their spell. And they don't throw a severed arm, knife and blood into the sand but a leg, cricket bat and ball.

"When shall we three meet again? In thunder, lightning, or in rain? When the Hurley-bowly's done. When the battle's lost and won ... There to meet with The Big Guy."

Mentally make those changes and this scene pretty much captures the vibe, I reckon.

Posted by MattHaydenAU at 11:09 AM