Was in the Sydney CBD on the 9th of March and saw this rally against the Russian invasion of Ukraine. I was in a bit of a hurry so didn't watch much of it but it seemed that the protesters were all or mostly Russians against Putin.

The two speakers I saw were definitely echoing the "Mad Vlad" narrative that is so dominant in the MSM lately and saying he wanted to expand his empire. I know Putin is far perfect. But there's obviously a helluva lot of other stuff going on that the fake news doesn't tell us about. It's mainly to do with the US biolabs. 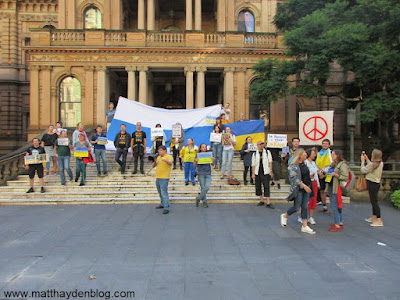 There was a gruff old dude in the crowd who looked a bit drunk. He was yelling stuff out about Soviet Russia or something. Maybe he was an old school commie Russian and was hankering for the good ol' days? Not sure. He might have just been very enthusiastically supportive of what the speakers were saying. It was hard to tell.

But I thought it was very revealing that the two cops who were there went up and told him to calm down. You can actually see this in the quick video I made. (BTW it ends abruptly because the camera ran out of memory.)

So they clearly had instructions to support the rally. Said heaps given that their counterparts in Canberra have been using high tech, Deep State weaponry on Aussies protesting against the vaccine mandates and other globalist insanity.

It's obviously not Putin who's the the main imperialist but the globalist Cabal, who own and control the MSM and pretty much all establishment politicians.

Posted by MattHaydenAU at 12:27 PM