Every witch way but news

We all know that the so-called "journalists" at their ABC are tragically indoctrinated, globalist-controlled lefties, which is why they don't produce actual news but selective propaganda. They're also driven by feelings, not facts. As a result much of their star broadcasters' commentary is as incoherent as it is cringeworthy. Being so child-brained and daft, they routinely contradict themselves too.

The friends, colleagues and relatives of Kitching who may feel aggrieved at the pressure she was under to retain her preselection may also feel driven by a righteous anger that now clearly feeds the media cycle — but it is profoundly disappointing that it's playing out in archaic and sexist language that has its origin in representations of witches, harpies and shrews. 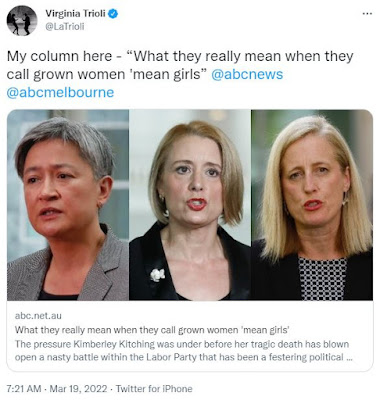 It's full of the usual crap about culture and misogyny, natch. And she avoids addressing the fact that the reason the term "mean girls" is featured in so much of the current commentary is because Kitching herself used this term to describe the three Labor women shown above.

But it's the witches reference that made me laugh because of what she wrote not so long ago about women's entirely justified anger against the patriarchy:

We are going to have to get comfortable with seeing a woman's rage. And if this generation is offering to teach us all the dark arts of refusing to make nice — I want to join their coven.

Eh? So being a witch was kewl back then? I'm confused ...

Virginia is really having a bob each way here. She's clearly ambivalent about the whole wiccan thing.

It's a bit like this famous quote you may have heard: "I refuse to join any club that would have me as a member."

Weirdly apt given she's a cultural Marxist. Though, unlike Groucho himself she's not so much a joker but a joke. And an unfunny one at that.

Posted by MattHaydenAU at 12:47 PM