I don't doubt that the blazes were real. But the narrative about how they started is obvious bollocks. Seriously, what are the odds?

Like so much fake news these days there's a 'rona link -- indirect this time. Apparently there's a buying frenzy for these coils because people are packing death at the prospect of the next pandemic: Japanese encephalitis. 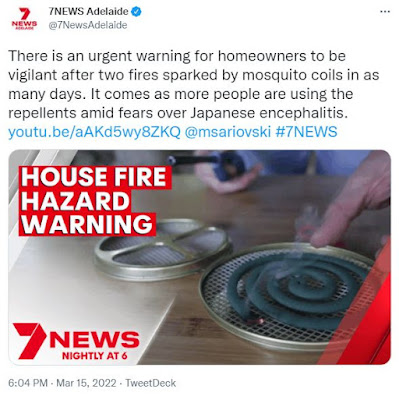 Look closely at the coil in the screenshot above. It's pretty distinctive, and reminiscent of a certain symbol used by rock spiders.

Crazy as it sounds, I think that's what this is really about. Seems to be some sort of coded message about child trafficking and a related drug trade.

Maybe it's a "bad batches" warning to do with this drug. Or it might be a more general kind of symbolic incantation. After all, they really love this idea of (pink) fire, particularly when it goes "through the roof".

With this context in mind the details surrounding these fires, and the terms used in this report are interdasting.

One of them was at King Edward Avenue. Could this be comms to do with the royal family?

The segment includes an interview with a fireman dude called Angelo. Reference to a certain fallen angel, perhaps?

Dr Chris Moy keeps the fear going by telling people to use spray-on repellant. "Chris." Hmm. Put a "t" on the end and what have you got?

The reporter calls one of the fires an "inferno". Pretty OTT way to describe a house fire, innit? I think this was a reference to that Tom Hanks movie about a pandemic. Hanks is (or was) very high up in their occult system, so they're often making references to him.

Also, one of the suburbs mentioned in the report was Kilkenny. What does that name bring to mind? "They killed Kenny!" from South Park.

Yeah, I know my interpretation if these data points sounds so insane and diabolical as to be completely implausible. But the occult elite do have form for this kind of thing. They absolutely love wordplay and alluding to popular culture in symbolic incantations and comms.

Their trick is to be so completely barking batshit mad with this stuff that normal folk just can't accept that anyone could seriously dream up these shenanigans, let alone carry them out. That's how they hide in plain sight. They've been doing it for ages and getting away with it the whole time.

So, I think that this story has been entirely dodgied up for some hidden purpose.

Sol was based. Be like Sol. Don't be hypnotized by the secret society wankers and their tool of mass hypnosis, the fake news.

Posted by MattHaydenAU at 10:48 AM