Dog stars by the dozen

Much of the insanity that we are now experiencing is due to the mainstream media. They purport to be brave truth seekers speaking truth to power but they are all basically shameless propaganda peddlers relentlessly nagging us all to "get the jab".

Ultimately they are the tools of "the creepy cult that rules the world". That's why I think it's worth looking at their content closely and identifying their favourite symbolic themes. They are definitely present and say a lot about the forces ultimately controlling them.

There seem to be several patterns that keep appearing. There's one to do with kids which is really disturbing. Here's an example.

There's another that involves a "blue dog" motif. This is meant to represent Sirius, the dog star, an occult elite fave. 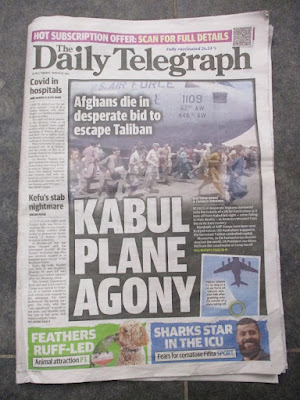 You see this repeated all through the MSM. But the Daily Telegraph is absolutely chockas with it. Sometimes there'll be several "dog stars" in one issue alone.

They have various ways of representing it. Sometimes it's in the form of a dog with a blue collar or jacket. Maybe there's a lot of blue in the background such as clear sky or ocean. Or the owner is wearing blue jeans and top ... that kind of thing. 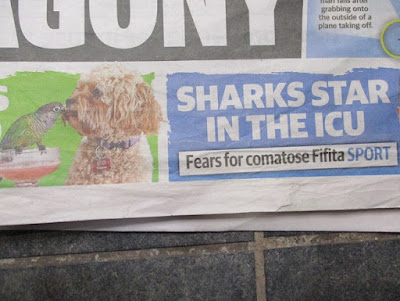 A common trick is putting a photo of a dog in one story with the word "star" in the corresponding article, or a neighbouring one that is unrelated content-wise. You can see a classic example of this in the cover above. Also, notice that the ad for the story on the right has a blue background. 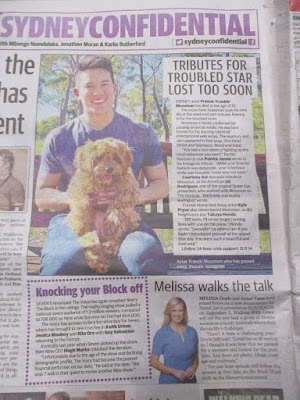 This is another one. Notice how the poor deceased guy (who committed suicide) is wearing a lot of blue, as well as being called a star. The sleb in the item below is also wearing blue. What are the odds?
Apparently his depression resulted from the lockdowns (someone on Twitter who knew him said this). The presence of a blue dog seems to symbolize evil done in the service of the occult elite (globalist) agenda. So this particular "dog star" was a classic case of symbolic incantation. 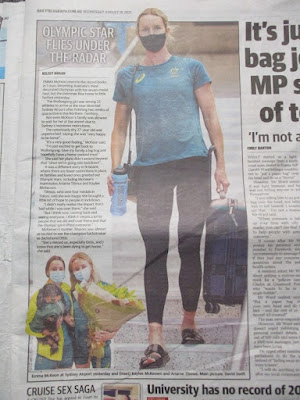 Here you can see a little dachshund included in a piece about an Olympic swimming star. Her top seems to be turquoise. Not strictly blue, but it's still pretty close to that colour in the spectrum. 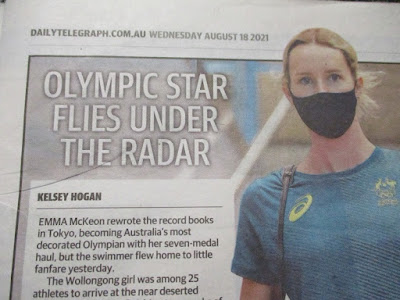 Notice how the swimmer's head protrudes through the border of the story. You see this often in the paper. I think this could be code for "heads up guys". It's telling a select audience to look closely at the item for symbolism, or possibly even specific comms. 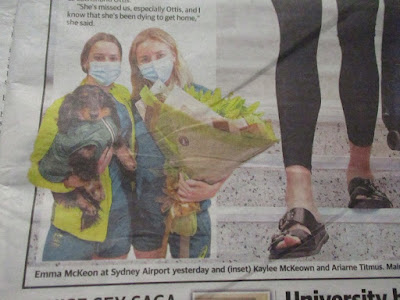 The dog in this case is a little dachshund. Also notice the flowers. They love to use them as symbols as well -- particularly roses.
Puppies in particular are often equated with kids. And there is a very sinister pattern related to stories about them and modes of transport. It usually involves cars and roads but sometimes it's related to marine travel and also airplanes. That's why the idea of "flying under the radar" could be significant. Also, check out the headline directly below the pooch, which can be seen in the top photo.
I doubt that any of these touches are specific references to the subjects of the stories. They all seem to be symbolic links meant to highlight themes or ideas. 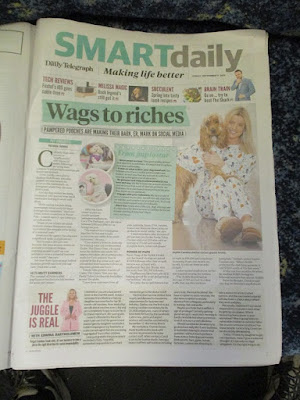 The star in this case is literally called a pup in the headline, and wears jim jams made for a kid. That's a clear case of equating the two groups of beings.
Notice how the woman's right foot is facing upward, with the sole exposed to the camera. That's another occult elite fave. 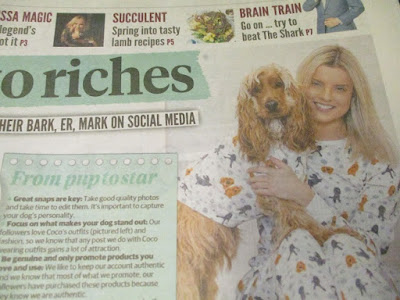 The headline invokes the idea of making money. That theme is often related to these patterns of imagery. 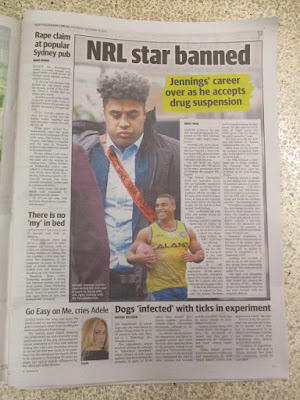 In this story the word "dogs" is almost exactly underneath "star" in the headline above. And drugs are bad, remember?
Notice the blue of his shirt and jacket and shorts. All very close to the word as well. Clearly not a coincidence.
Check out the headlines on the left hand side of the page. There's the word rape in one. Look closely at the one directly below it. 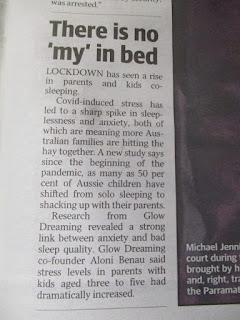 It's about kids and their parents sleeping in the same bed because of lockdown. This would be innocuous as a one off but not when you consider it in context. Just below it the headline about Adele clearly has a rapey vibe as well.
It's like the layout is some kind of batshit occultist attempt to concentrate, and thereby summon, evil. 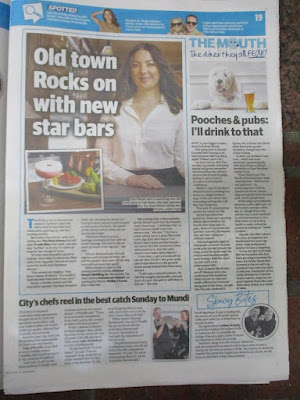 And here's a nice benign example to finish off with.
I know that what I'm describing here is completely and utterly barking mad as well as being creepy as all get out. But the pattern is indisputable. And there are countless other examples of this and similar themes I see in every issue -- as well as other MSM outlets. This post has just scratched the surface on the dog star motif alone.
I'm happy to consider alternative explanations for what I've described. But saying I've got my figurative tin-foil hat on just won't cut it -- particularly if you're wearing a literal mask!
If you've enjoyed this post please consider supporting me via Ko-fi. Aussies, know your rights!
Posted by MattHaydenAU at 7:54 AM