Did Blue Origin rocket boldly go where no scam has gone before?

We all know that the MSM are corrupt. They fake things all over the place. Much of the time these lies are "little white ones" using Photoshop, or selective editing.

This story about William Shatner's journey into space on the Blue Origin rocket is a good example. 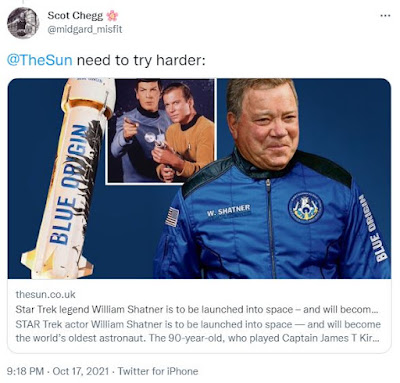 An eagle-eyed tweep noticed the deception. 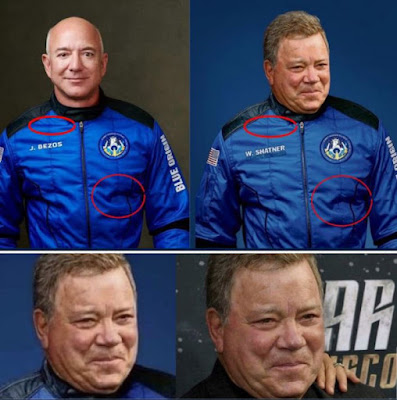 But I suspect that the fraud may have been way bigger than that. I'm actually not convinced that the journey even took place at all!

The whole thing seemed like a globalist elite ritual mocking normies. The rocket looked like a giant knob, not unlike the one built by Dr Evil. And the anatomical term for the base of the very top section -- where the "rocketmen" including "Captain Kirk" were strapped in, and which parachuted back to Earth -- is the corona.

Also, the Blue Origin rocket took off near the town of Van Horn. What are the odds?

Watch the launch in the video embedded below. Take particular note of the liftoff seen from above. Presumably that's from a drone. Would they really have one hovering there? Sounds a bit risky. What if it malfunctioned and ended up in the path of the rocket?

Look closely at the actual rocket flame. Looks like CGI to me. 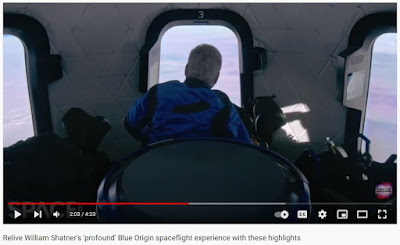 If you watch that video all the way through you'll also notice that as they're all floating about in zero gravity the woman astronaut says "holy hell". That's a very interesting phrase to use.

Just after she says it you see the numbers six and three above the windows. Is that a way of saying three sixes? We know they love the phrase "build back better" because the lower case "b" resembles a six.

Given that creepy globalist elites often tell us that what they're up to is BS ("revelation of the method") this could be another example.

And remember that William Shatner is above all an actor. Is this another role he's playing in a production?

Then there's that intriguing comment he made in an interview about the rocket journey. It involved his belief in a "coming catastrophic event".

Was this predictive programming for their next big fear campaign to try and justify worldwide, simultaneous totalitarian control? The current one isn't exactly working out so well. So maybe they've decided to try and con humanity into believing there's another existential threat coming from the sky this time, or at least have that as a backup plan?

Given how determined these batshit death cultists actually are, I would not be surprised if this was the case.

If you've enjoyed this piece, please consider supporting me via Ko-fi. Aussies, know your rights!

Posted by MattHaydenAU at 11:46 AM