You've prolly seen this new pro-jab campaign featuring a couple of low-life junkies saying that there's no way they'll get Astrazeneca because they don't know what's in it.

It's supposed to be some kind of killer argument against those crazy antivaxxers because of course these losers are doing far worse all the time. Oh the irony, etc ...

But the makers of the ad come off looking way more foolish than the group they're tryna discredit. 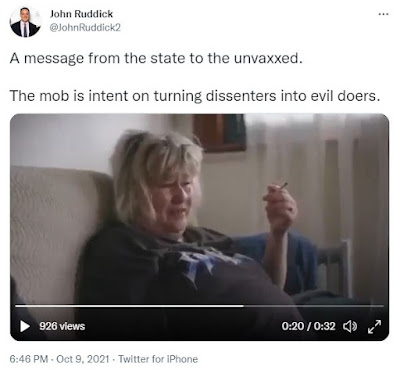 It really shows their desperation. This is the ultimate strawman -- or rather, straw junkie. The jab promoters clearly have little confidence in their product's efficacy and safety. So they don't positively invoke that. And they know that so many people are now aware of the risks that even junkies would be too. So they use a hackneyed stereotype of them to smear all those who'd prefer not to get vaxxed.

In any case, if there is a group of people who would more accurately portray jab refuseniks it would be clean living, health fanatic gym junkies -- not fat, pasty, junk food guzzling junkies.

This ad is just a variation on the "tin-foil hat-wearing, batshit crazy conspiracy theory peddling antivaxxer" stereotype. It's a cheap, easy way to demonize your opponents and get impressionable folk to stop listening to anything that doesn't follow the globalist narrative.

But as we all know, there are plenty of smart people who have major reservations about getting the jab. It's not just because of all the jaw-dropping data about adverse events that is recorded on official government sites that the MSM and pollies fail to mention. It's also due to the insane intensity with which the entire vaccine rollout has been promoted.

How could any thinking person not be suspicious about what this injection is really about given the relentless determination of its promoters to make absolutely everyone on Earth have it?

Speaking of illegal drugs and their composition, where are the pill testing proponents? It's an indisputable fact that some people are dying from the jab, and seemingly at a greater rate than from ecstasy ODs at events like the Big Day Out. So why aren't they at vaccine hubs offering to analyze doses, say what's in them and tell those waiting in line if they're safe or not?

Tellingly they, like so many other activists and professionals claiming to care about our rights and health, have been silent the whole time ...

Posted by MattHaydenAU at 2:16 PM