Brad Health Hazzard telling people not to listen to "strange dudes" on social media is peak irony. If anyone fits that description it's him.

Actually, if there were Oscars given to dudes for their strangeness, he'd win all of them for sure. I think the little golden trophy itself would be modelled on him, TBH! Apart from anything else, he seems to have a real obsession with gold ...

Saying that the Delta variant was a "gold medal long jumper" was very strange. Then there was that extremely strange (and creepy) speech he gave to kids, telling them that vaccination was a "golden opportunity".

The dude's Twitter feed is chockas with strangeness too. He has tweeted several times about how the vaccine rollout has brought him "joy". Again, as creepy as it was strange. He, like so many other needle-freaks, seems to get a weird buzz from the thought of syringes being stuck into people. 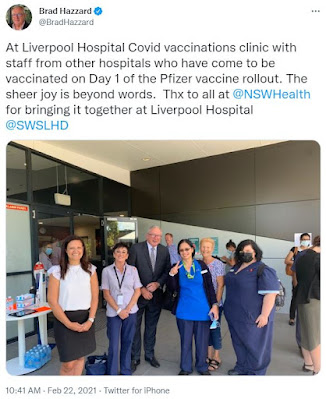 That said, it's quite understandable that he's such a strange dude. These are very strange days, after all.

This whole global vaccine rollout is like something out of a dystopian movie. Then there is the looming threat of AI, and evil squillionaires in the Epstein Island tier determined to take humanity into some kind of transhumanist "Great Reset" and beyond.

Speaking of strange days, there was an underrated movie with that very title that addressed some of these issues in a way so prescient that I think it was actually predictive programming. It featured several strange dudes -- though it must be said that all of them, even the villains, were pretty cool as well.

Set in the year 1999 during the last days of the old millennium, the movie tells the story of Lenny Nero, an ex-cop who now deals with data-discs containing recorded memories and emotions. One day he receives a disc which contains the memories of a murderer killing a prostitute. Lenny investigates and is pulled deeper and deeper in a whirl of blackmail, murder and rape. Will he survive and solve the case?

John Lennon was pretty prescient too ...

Posted by MattHaydenAU at 11:41 AM