So many Oz icons dying after a fall ...

We all know about Carla Zampatti dying after tripping on steps at an outdoor theatre production. I thought that was fascinating, since the title of the opera she was at -- La Traviata -- actually means "fallen woman".

Strangely, not one MSM figure remarked on that irony. Now we all know that journalists are stupid. But surely one or two must have realized this. And if you did, you'd say it right?

But none of them did AFAIK. Which makes the whole thing even more intriguing.

Around the same time Dictator Dan fell down those steps. This wasn't fatal obviously, but it still put him out of action for many weeks.

Then there was John Elliot. He died after a fall as well. And the Australian Financial Review alluded to this in the title of its obituary.

Someone else who fell but didn't die was Patti Newton. Not unlike Carla Zampatti, she tripped on a step. This caused a serious injury, and she had to wear a moonboot -- pretty ironic given hubby Bert's nickname of "Moonface".

At the same time the legendary TV host himself had his leg amputated. I thought that was odd.

Hell, what are the odds that two Aussie TV icons -- who were married to each other -- both suffered serious health issues related to their right legs, and simultaneously? 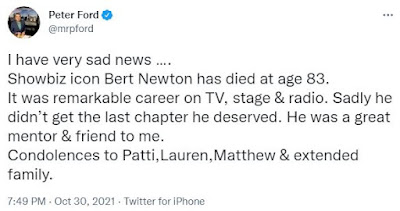 Now it turns out that he's dead. Not sure of the ultimate cause but it sounds like it was related to that amputation.

I've also just discovered that Michael Gudinski had a fall a week before he died (see embedded tweet below). This was pretty serious, and required prescription drugs for the pain. These seemed to have been part of the cocktail that ultimately took his life. 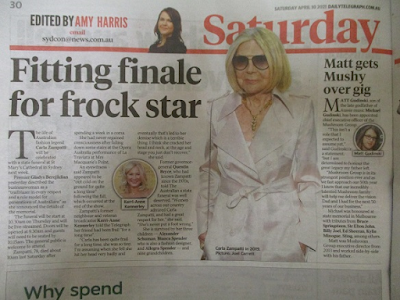 I remember thinking that the Daily Telegraph was hinting that his death and that of Ms Zampatti were related somehow. As you'll see above, the headline of the story about her funeral called her a "frock star" and the item was placed right next to a story about his son, Matt.

There seems to be a real theme running through all these celebrity passings. If it wasn't a fall that killed these famous figures directly, it seems to have been a major factor in their deaths. And if you do suffer a fall, you lose your footing, right? That's why I think Bert Newton's death can be included in the same category.

It's all pretty spooky, innit? Kinda fitting though, given it's now Halloween ...

And on the wider issue, I can't help but suspect there's something deeply symbolic going on here. At the very least, we're not getting the full story from the MSM.

If you enjoy these posts please consider supporting me via Ko-fi. Aussies, know your rights!

After revelations that Australian music legend Michael Gudinski died from a drug cocktail, showbiz guru Peter Ford @mrpford explains what this means for his legacy. pic.twitter.com/KrWW26adDE

Posted by MattHaydenAU at 6:55 PM