Once you realize that so much of the current craziness going on in the world is being driven by a small number of extremely powerful and evil people, it makes a lot more sense. Pretty clear that these arseholes hate humanity with a passion and are determined to cause as much suffering and death as possible. They believe that with billions of "useless eaters" psychologically, economically and socially broken, they are much easier to control.

These globalist elites ultimately own all the world's big mainstream media outlets. They dominate Hollywood and the music industry as well. They only elevate those into the A-list those whom they are sure will do their bidding.

So these revered slebs come out with the most outrageous bollocks and the MSM broadcasts it to billions. Most of the time it's just the usual mind-numbing cultural Marxist crap. But sometimes it's truly evil, and not overt but coded. They've been doing a lot of this lately. It's best described as "hiding in plain sight". 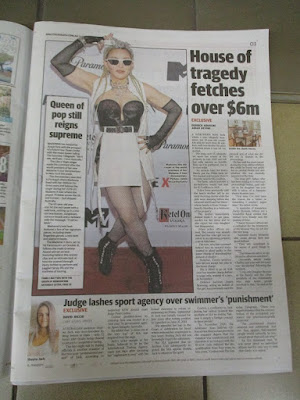 The Daily Telegraph definitely has form for this kind of thing. The paper routinely conveys sinister themes subtextually through the juxtaposition of headlines and images. I suspect that's what's being done on this page from a recent issue.

Look at how Madonna is holding her arms. Now imagine if she sprouted another two repeating this position. You'd get a swastika, wouldn't you? 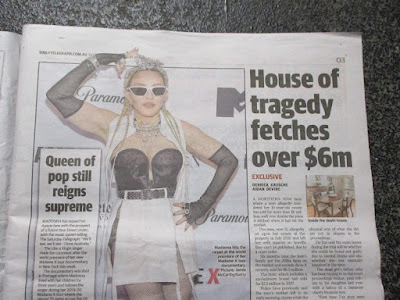 The headline literally says she is reigning royalty -- the "queen of pop". Pop is short for popular music. But it could also mean population. And we do know that globalists believe that this has reached unsustainably high levels.

The idea of some kind of yuge global catastrophe offing billions is something that Madonna has sung about with Quavo in "Future":

Not everyone is coming to the future

Not everyone is learning from the past

Not everyone can come into the future

Not everyone that's here is gonna last, gonna last

So, looks like she'd be totes kewl with a mass killing of humans like the Holocaust but on an even larger scale.

Just in case you doubt that Madge could be that evil, check out this tweet from early 2019. 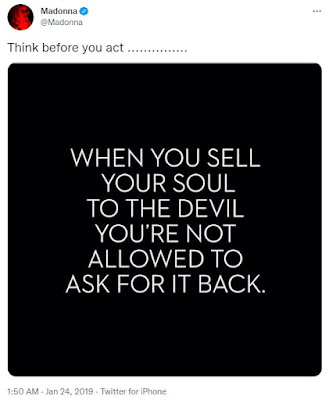 Also, notice the headline on the right hand side of the page. It describes a "house of tragedy". A building in which many deaths occurred could accurately be described as such, right? There are definitely several of those at places like Dachau and Auschwitz.

Then there's the price that the dwelling has fetched: Over six million dollars.

Posted by MattHaydenAU at 1:20 PM