We are ruled by medical fascists. What is their end game?

If by now you can't sense that there's something very sinister going on in Australia -- and the world for that matter -- you really haven't been paying attention. All the restrictions, masks mandates and so on were waaay over the top even a few months after this "pandemic" started. And now it's beyond obvious that the creepy globalist elite desperately wanna use the 'dreaded 'rona to force us into the Great Reset.

They clearly have control of governments all across the world through their "public health" systems.  And they have been hijacked to the point where they seem to be actively determined to make people unhealthy. To call their approach medical fascism is not an exaggeration.

They are clearly behind this fervent goal of getting everyone on Earth "vaccinated". And I find it interesting that they are so fond of syringes, when there are other ways of administering these (untested) concoctions. Frankly, I think they really enjoy the idea of sticking them into people. They really are that controlling and cruel.

The most zealous globalists muppets in the MSM are flogging the need for everyone to get the shot, even children.

There's something really disturbing about this. It's well established that kids are not at risk from the dreaded 'rona. We know that many thousands of people have already died from these injections. And there's no way that kids can give informed consent. It's bad enough that there are people who wanna turn adults into jab rats. But children? That's just evil. 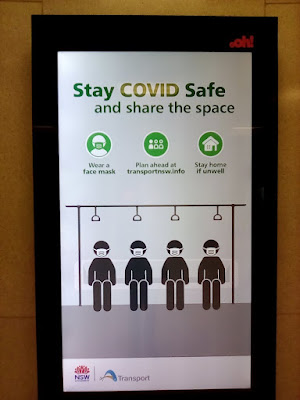 Speaking of which, that's the vibe I'm getting from a lot of promotions related to this whole psyop. Look at the one above.

The masks are of course dehumanizing. But look at the strap above each muzzled passenger. Bit like a noose, innit? Or it could be seen as a shower nozzle. Remember that this is how Nazis gassed Jews in Dachau and other concentration camps after they came in on trains.

There's this concept called "revelation of the method". That's a process in which Luciferian scumbags basically tell us what they're doing. There seem to be various reasons for this. But in part I think it's to give us "fair warning". Then if we do nothing, the bad karma is on us. I think this is what they're up to here. 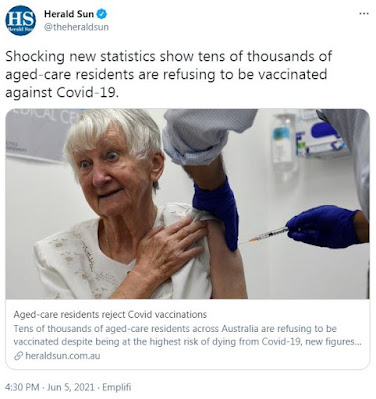 Some might think that theory is way OTT. But there has been lots of similar stuff from government and media. Take this shot of Jane Malysiak (the first Oz jabbee) as a symbol of the elderly. The fake news MSM made much out of her surviving Nazism. Her age -- 84, bringing to mind Orwell -- was often cited in reports.

As we all know, ScoMo et al have compared the vaccine rollout to a massive military operation. And they've now got this ADF dude wargaming the whole thing.

So choosing a World War Two survivor to launch the rollout was clearly meant to be symbolic. Given that they were invoking D-Day, you'd think they would have chosen a French oldster. I'm sure that in a nation of over 25 million there would be many of them to choose from.

But nup. She was Polish. That was of course the first nation invaded by Hitler. I don't think that was an accident. 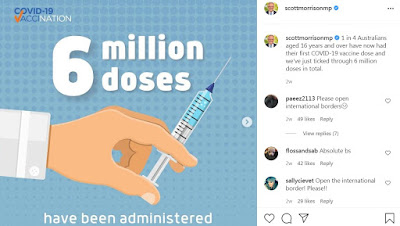 I doubt that this many injections have actually been administered here in Australia. But knowing that these shots are actually killing people and the historical resonance of that number, this certainly creeps me out. 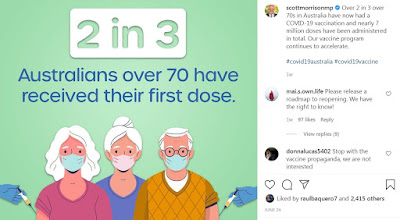 As does this image. Look at their eyes. It's as if they've been painted to look obedient and helpless, dunnit?

Then there's the MSM yucking it up over the "Vaxinator". Big Arnie's cyborg was a killing machine, after all ...

Posted by MattHaydenAU at 1:17 PM