Really good to see that so many people turned up to the Sydney protest against Gladys Kevorkian and her insane fascist lockdown. The totally corrupt lying MSM are saying that there were a few thousand there, but the videos show waaay more than that. And they clearly came from all walks of life.

The abusive labels "conspiracy theorist" and "anti-vaxxer" have long been inaccurate to describe people against lockdowns, masks, and these COVID "jabs" (which aren't even real vaccines strictly speaking). But they have still been an effective method of stifling debate and maintaining control of the narrative.

Now they have pretty much lost their power. More and more normies can see that the protesters were mostly just everyday Aussies who've had a gutful of this obvious medical fascism. They understand that they are making a stand now because if they don't it's only gonna get worse.

Of course the tragic robodolts in the totally owned and controlled Australian MSM can't get their heads around that concept. They've been conditioned like Pavlov's dogs to cheer their side and boo their opponents.

But it seems that there is a faint flicker of actual individual thought going on in their tiny minds. It causes cognitive dissonance, which they find painful. 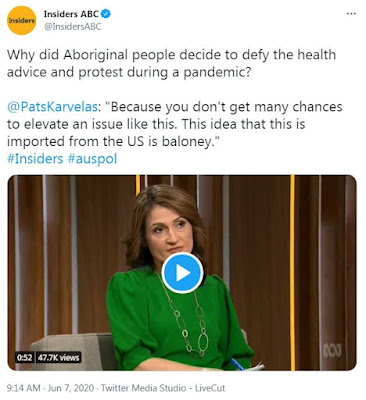 Of course Patricia "Gumby" Karvelas didn't have any cranial discomfort when supporting the rights of BLM marchers to demonstrate en masse, even though all the same "pandemic" conditions applied back then too. 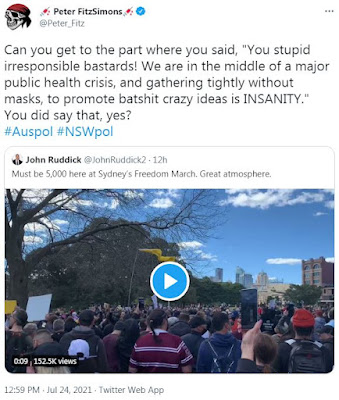 The unpleasant cognitive dissonance prolly has to be a bit more severe to be perceived for the likes of Pirate Pete given he's made his bonce completely numb from wearing that stupid "Fitz Franger" for so many years. I don't think all those high tackles during his rugby career would've helped either. So, to give him the benefit of the doubt, I'll assume his brain did hurt but he just didn't feel it. 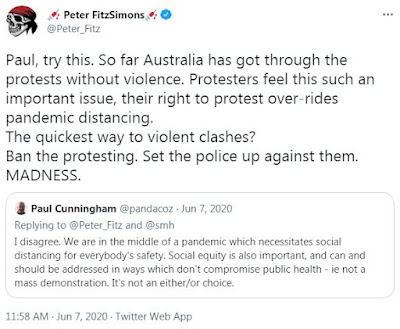 Like Gumby Karvelas he was all for the BLM marches at the time. To ban them was "MADNESS", he said.

Amazing how they all seem to follow exactly the same script, innit? It's what happens when you're infected with the thought-killing globalist mind virus. 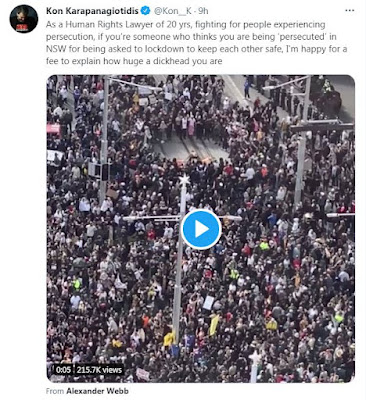 "For a fee." Hmm. But I thought Kon was against capitalism? 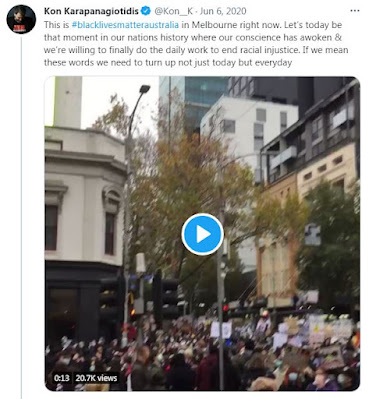 I'm sure there was some "konnitve dissonance" in there somewhere. It's just been drowned out by countless waves of smug sanctimony ...
You can absolutely be sure there are many other cases like these. The right-on, PC, sneering hipsters are always motivated primarily by the feels. The good ones are attached to expressions of cultural Marxism, which is the political "divide and conquer" tool of globalism. They get triggered bigly by the hurty ones when these are resisted in any way.
The internal reaction is violent and upsetting, much like what Palin's character experiences below. They do manage to stifle it in various ways though. I actually think it's why so many of them self-medicate with drugs and alcohol. It's to stop them feeling the pain of thinking for themselves.
Thanks for reading, and if you've enjoyed this piece, please consider supporting me via Ko-fi.
Posted by MattHaydenAU at 1:11 PM